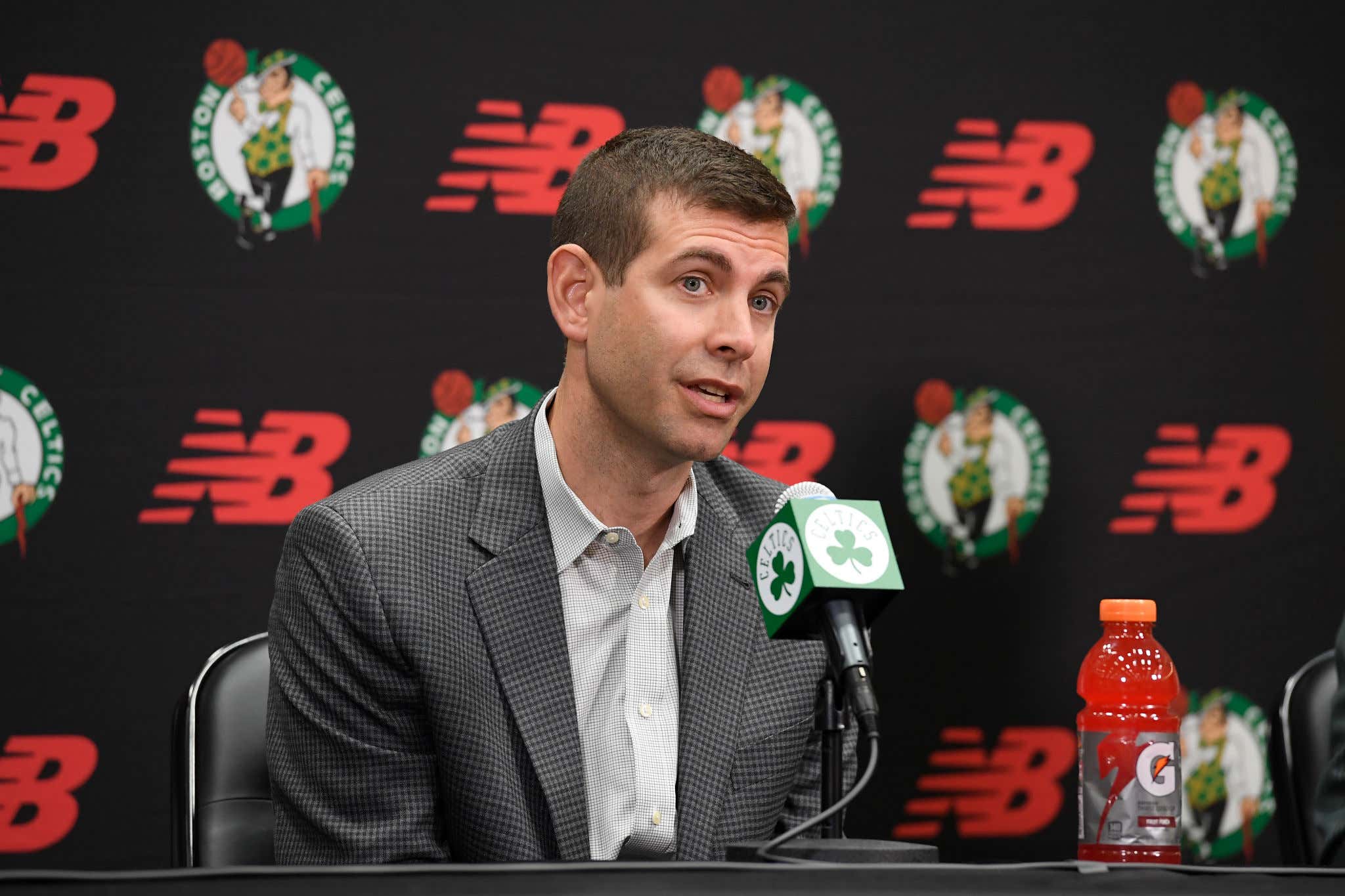 One of my favorite parts of the Danny Ainge Era were his press conferences. Trying to figure out what he was saying without saying it, reading in between the lines for how he really felt, seeing what spinzone he could come up with when shit hit the fan, it was a fun ride for over half my life. Well now that Brad Stevens has taken over it's time to do the same for him. Since he's calling the shots, what he says matters. With Summer League over he addressed the masses this morning so let's have a look at what he said in regards to this team moving forward

Boom. Now this is what you want to hear to kick us off. Does Brad want to stink this season? Nope. He wants to be a good basketball team. That's an important first objective on the list. Be good. At least we know where their head is at. Not every team in the league has this goal. Some want to stink. Being good is the opposite of what they want. Now can they achieve this daunting task? Only time will tell. So how exactly can they do it?

Brad is no dummy. He knows what plays in the city of Boston. He knows how beloved his rebuilding Celts teams were that maybe didn't have the highest top end talent but played their dick off every single night. The entire city got behind them. Compare that to what we just lived through and the difference is staggering. The inconsistent effort, the lack of toughness, they didn't play with an edge and it was largely gross for the majority of the year. The good thing here is this isn't just talk from Brad. He backed it up with his actions. The signings of Josh Richardson, Marcus Smart, Al Horford, Dennis Schroder, Kris Dunn etc are all defensive minded players. They play with toughness and edge. He hired a defensive minded coach in Ime Udoka. Everything he's done so far this summer has put them on a path to getting back to that grit and toughness we saw during his early coaching tenure.

This stood out to me because there are a couple of fringe moves they could make. We have the second Two Way spot, Jabari's roster spot and Carsen's roster spot that all could be up for grabs between now and the start of the year. I would consider those tweaks around the edges, so my spidey senses are tingling. It may not be a major move, but it wouldn't shock me if we see some different proven NBA vets, maybe a stretch 4, to round out the roster.

Uhhhhhhhhhhhhh ya think? As they say though, sometimes it's better to be lucky than good. The fact that Schroder fell into Brad's lap was a gigantic prayer. Getting a starter quality player for $5.9M essentially doesn't happen in today's NBA. Not only that is still in his prime at 27. Shit, look at what Terry Rozier just signed for (4/97M). If Schroder is also on board with whatever role they discussed before he put his pen to paper then that's even better. But byeah, I would say they were "fortunate" nobody else wanted him. Sometimes one man's trash is another man's treasure.

It's a little funny how Fournier was brought in to fill the Hayward role the team was missing by being a Hayward-Lite type guy. He had his own availability issues/rough playoffs just like we saw with Hayward at times. Then he left for a bigger bag that the team should not have matched, just like Hayward. So it's only right that Fournier turned into another big TPE, that was slightly lower than Hayward's since this was Hayward-Lite. I know this though. Brad loves flexibility more than you love anything in your life. It's exactly what you should want from the guy in charge of running your favorite team. Doesn't overcommit to deals he shouldn't, maintains flexibility moving forward to add talent through a variety of ways. Now we just have to see how he uses it, just like we did with the Hayward TPE

Perhaps this is why Wyc felt comfortable giving the keys to Brad. While other teams I'm sure spend all this money on scouting, when it comes to Brad his evaluation comes down to if he feared a player or not. That's very Doc Rivers of him. Remember, if you played well against Doc Rivers in a basketball game, he immediately tried to add you to his roster. I do have some questions though with this current free agent class though. How much did Brad fear any of these guys? I get Schroder, he showed flashes, but Kris Dunn never played. Josh Richardson had a down year. Al Horford's eyes are too beautiful to fear. I'm just relieved to know that we have some next level analytics going into their roster decisions. Who cares what the numbers say, do you strike fear into the heart of Brad Stevens? If so, welcome to Boston.

Honestly, this was probably the most important quote for me from this whole thing. The luxury tax is a big issue going forward. Will ownership pay it? You essentially can't compete for a title unless you do, they made cost saving moves last year with the tax in mind, so to hear Brad flat out say Wyc gave him then green light to go deeper into the tax if he has to is GREAT news. Wyc has made it clear he'll pay for a good team so now it's on Brad to build it. With no financial restrictions, that gives the team more options.

Yam isn't a surprise since the news of his deal overseas came out yesterday, but I was surprised to see that about Juhann. Given what he showed in Vegas, I don't think it's crazy to think he could have snagged that second Two Way contract, and I wonder if playing overseas will help his development more than being in the building/playing in Maine would. I also selfishly want to keep watching him play because despite Juhann being raw as shit as a player, the promise is there. Especially defensively and in transition. Oh well, I suppose we'll just have to wait until next year.

One of the bigger questions heading into this season is what the hell Ime's system will be. It's clear that Brad values positional versatility, so I'm very interested to see how Ime uses it. Will we see two big lineups with Rob/Horford? Are we going to go back to the 2016 era where we saw a lot of Horford initiating the offense which had the Celts top 5? Is Ime more a P&R/ball movement kinda guy? I cannot wait to find out.

All in all, the biggest takeaways for me are the relief I feel that Brad actually wants to be good, and the fact that he can spend whatever he has to in order to make that happen. Mix in a little self awareness and the ability to poke fun at himself and the Brad Stevens era continues to deliver. Everything looks good on paper, he's saying the right things, but as we know it all means nothing if your plan doesn't actually produce. It's easy to do these pressers when things are all positive. I'm interested to see how he differs from Danny once a little adversity hits.