Eddie Gaedel, who was born with dwarfism, is the shortest player in MLB history at three feet seven inches tall. Signed by Bill Veeck, Owner of the St. Louis Browns, Gaedell pinch hits for Frank Saucier to lead off the second game of a doubleheader against the Detroit Tigers at Sportsman’s Park. Wearing a fraction as a number, Eddie Gaedel walks on four pitches as pitcher Bob Cain could not find his tiny strike zone.

Mired in last place in the American League, the St. Louis Browns were looking for a way to break the monotony of the dog days of August. The team struggled to find fans in the shadow of the St. Louis Cardinals of the National League. Existing for 50 years, the Browns were hardly ever a factor in the pennant chase, having only played in one World Series. Before the season, Bill Veeck, who previously owned the Cleveland Indians, purchased the Browns, hoping to turn their fortunes around.

Things did not go well for the Browns in the first season of Veeck’s Ownership as they were mired in last place with a record of 36-77 entering a doubleheader against the Detroit Tigers at Sportsman’s Park. Looking to draw some publicity to his team, Bill Veeck signed Eddie Gaedel to make one appearance. After the Browns lost the opener of doubleheader 5-2, Veeck had Gaedel get ready for his memorable plate appearance. 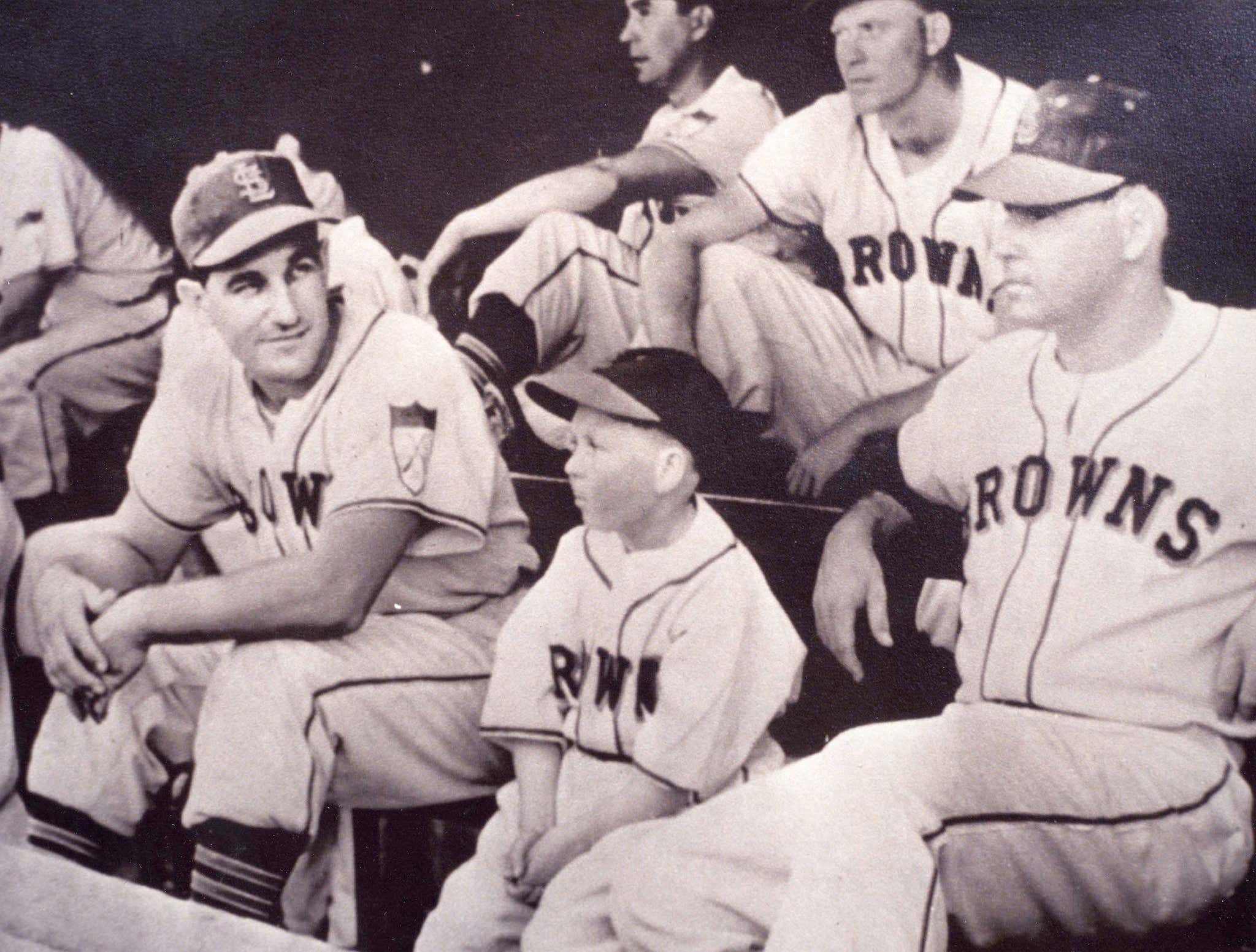 Eddie Gaedel was born June 8, 1925, in Chicago. He worked as a riveter during World War II due to his size as he was able to crawl inside the wings of airplanes. After the war, he went into show business, working as the mascot for Mercury Records. Looking for a little person to appear for the Browns, Bill Veeck found Eddie Gaedel through a booking agent. Gaedel made his first appearance between games of the doubleheader emerging from a cake that was used to celebrate the American League’s 50th season. Before the game, Veeck had promised a stunt that would create national attention, but when they first saw Gaedel, most were underwhelmed.

That was until Eddie Gaedel strolled to the plate wearing 1/8 on his uniform. The uniform was normally used by a Browns' batboy named William DeWitt. His father was one of Veeck’s business partners in the Browns ownership. The Browns had signed Eddie Gaedel late Friday night, knowing the league would not scrutinize the contract until Monday, allowing the stunt to occur during the Sunday doubleheader. Eddie Gaedel’s would lead off the second game of the doubleheader pinch-hitting for Frank Saucier. When umpire Ed Hurley questioned Browns' manager Zack Taylor, he had a copy of Gaedel’s contract in his pocket. Eddie Gaedel stepped in the batter’s box to face Bob Cain of the Detroit Tigers with his place on the team secured. Gaedel was under strict orders not to swing as he walked on four pitches. Throughout the at-bat, laughter was heard throughout the ballpark. Reaching first base, Gaedel was lifted for pinch-runner Jim Delsing, as he reached a standing ovation from the 18,369 fans. The Browns would go onto lose the game 6-2.

Following the Eddie Gaedel stunt, the American League and the Commissioner’s office was not amused. American League President William Harridge chided Bill Veeck for making a mockery of the game and voided Gaedel’s contract. Commissioner Ford C. Frick announced the commissioner must approve all contracts before a player can appear in a game, ending the chance of another surprise appearance. They also passed a height requirement, to which Bill Veeck asked, "would that also bar New York Yankees Shortstop Phil Rizzuto," the reigning American League MVP. 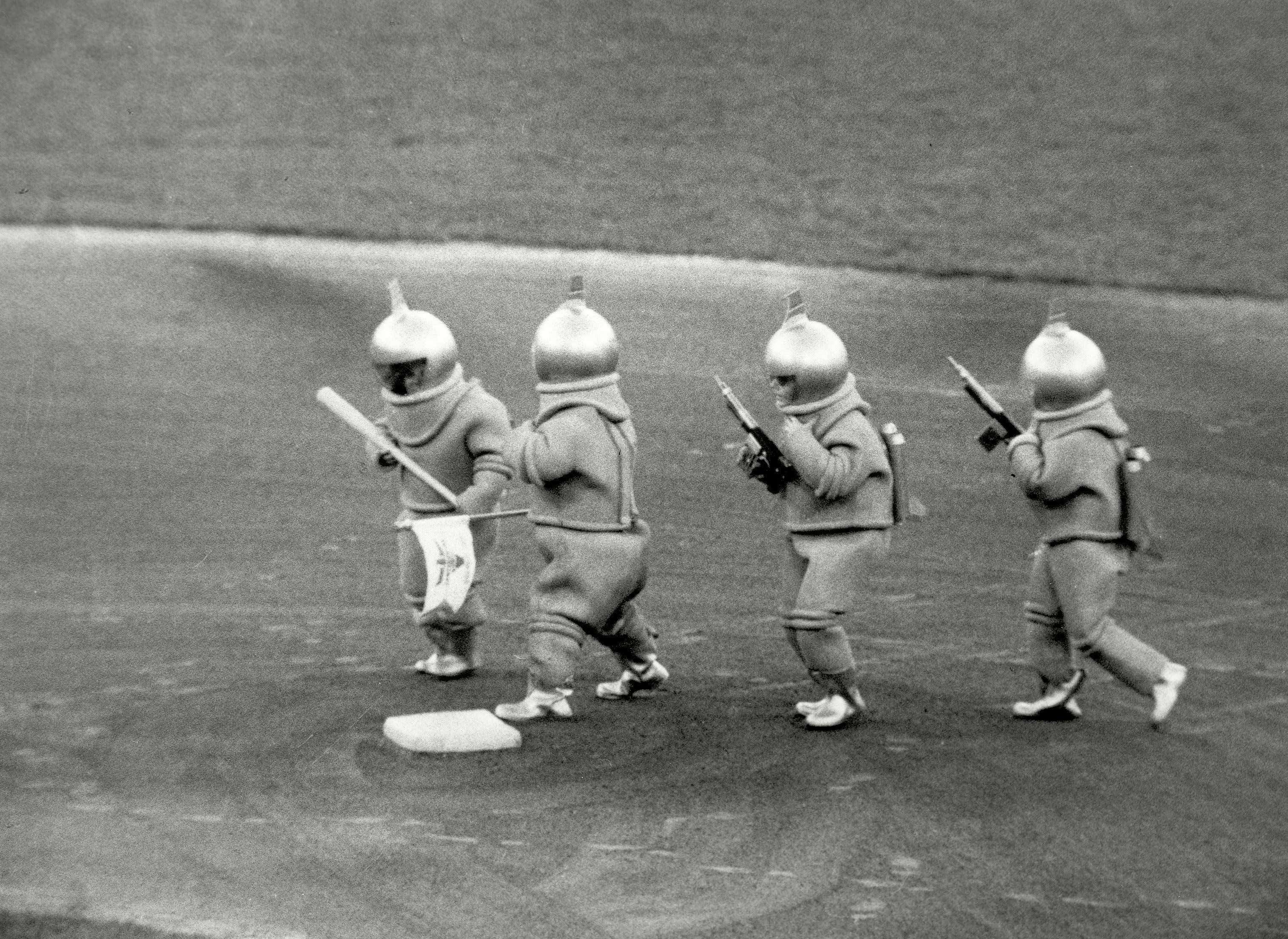 For his one at-bat, Bill Veeck would receive $100, but out of the fame, he could make $17,000 in television appearances. Veeck was unable to save the Browns as they moved to Baltimore after the 1953 season. Four decades later, William DeWitt, the bat boy who gave up his uniform, would purchase the St. Louis Cardinals. Bill Veeck later brought the Chicago White Sox and employed Eddie Gaedel again to appear as a spaceman with a laser gun along with three other little people. Sadly Gaedel died just two years later, suffering a heart attack in his sleep after being beaten up after visiting a bowling alley.