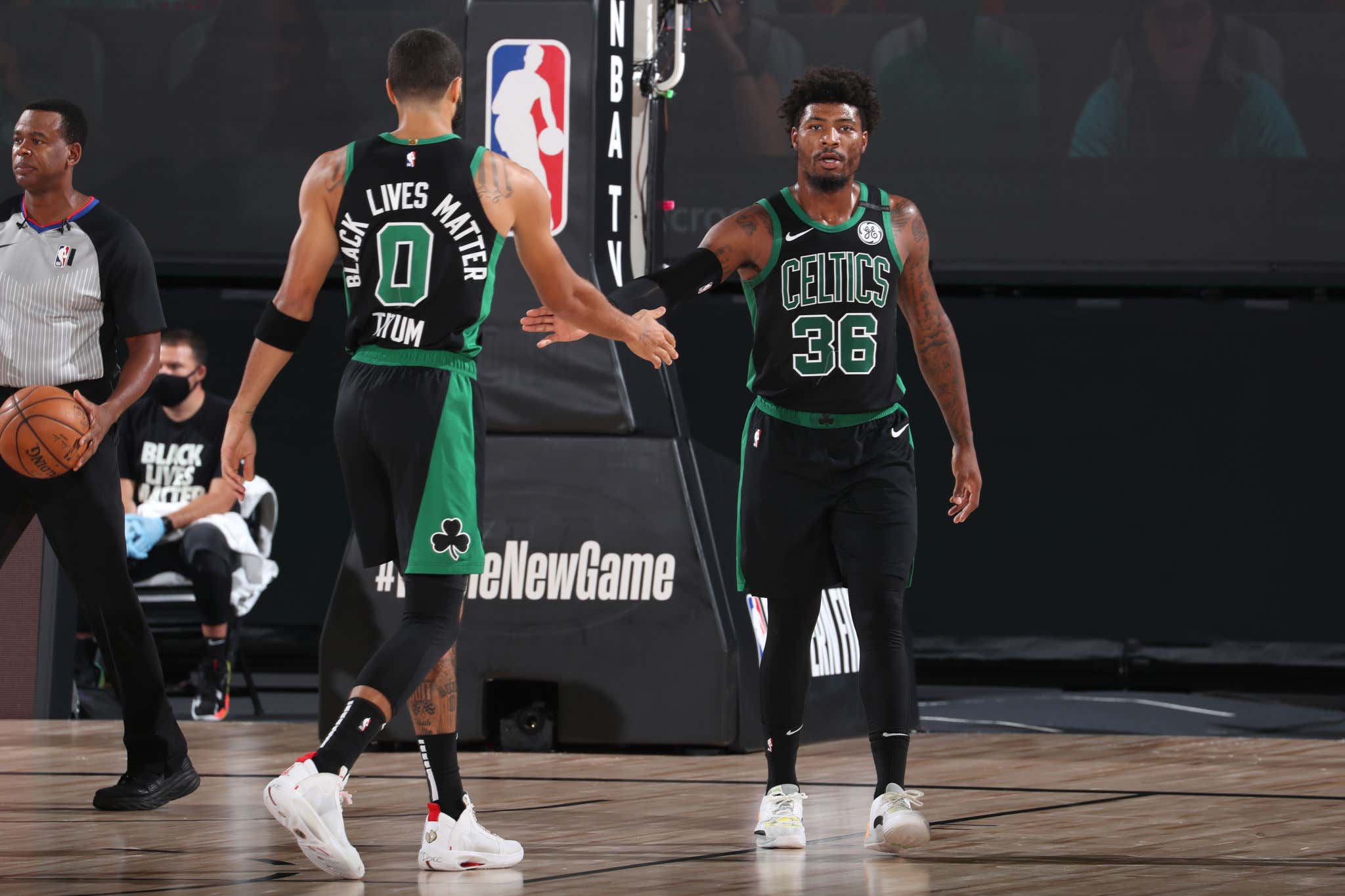 Now that the dust has settled on Marcus Smart's 4/77M extension and he now has a truly defined role, I wanted to look at both the positives and negatives moving forward. In order to try and understand what is on the horizon and what you can expect with Marcus Smart as the starting point guard, I find it helpful to look back and dive into certain trends that I feel will be important moving forward.

When it comes to Marcus Smart, the narrative is weird. I feel like a lot of people live on either extreme. Either they think he absolutely sucks and should not even be on the team, or people think he can do no wrong and is the perfect player. I'm not sure either are right. I know a lot of people talk about the "heart and soul" and all that stuff and while that's important, I care more about the actual on court production. So that's what this blog is going to be about. Put aside the intangibles for a second or at least for the duration of you reading this blog. There's plenty of tangible evidence that can help tell this story.

The first thing we need to address is this idea that Marcus Smart shoots too much, he takes terrible shots at the worst times and doesn't know his role because he steals shots from Tatum and Brown. To make this as clear as possible, this narrative around Smart simply is not true. Let's address this one by one.

Smart shoots too much

Last season Smart took 10.6 FGA a game. For his career, he takes 9.0 a game. Considering he plays over 30 minutes a night, that is not a lot of FGA. I think where people get confused is the games last year where a starter was out and Smart had to bump up his FGA out of necessity. Last season Smart was 5th on the team in FGA, even behind Evan Fournier. Even with Kemba's offensive struggles, Smart still finished behind him. Outside of the center position, no starter took fewer FGA than Smart. That's why it's confusing whenI hear that he shoots too much. What do you want? Him to be Ben Simmons and never even shoot? That does way more harm than good. Teams still defend Smart's jumper which helps create space for everyone else. If he never shoots, that goes away.

This is also sneaky another weird stance people have that the data simply does not support. It's pretty easy to look up the clutch time production we all just witnessed last season. Marcus Smart was 4th on the team last year in terms of clutch time/end of game FGA at 29 while shooting 41/35% in those situations. Just look at the clutch time FGA from the main guys last year

This was even with Kemba shooting 22/25% in the clutch. Now the NBA defines this as the last 5 minutes, but you can look closer, so I did. Here's the FGA distribution in the last 2 minutes

So, as you can see, it's pretty clear that when the game is in the balance, Smart actually does know his role. Again, it's unrealistic to think guys won't take a single late game shot. That's not basketball. The important thing here is that we have clear evidence that Smart does not take anything from the Jays when it matters most in terms of shots. In fact, his 35% clutch time 3P% is actually higher than both Tatum and Brown had last season. That's not to say those guys shouldn't be the first 2 options, but it's worth noting.

Again, what does this even mean? I feel like people hear this on the radio and just speak it as fact. We know that when Smart plays with the Jays, he defers. His FGA go down and his ASTs go up. He takes a back seat offensively when it's crunch time. Isn't that….his role?

Now, this does not mean his offensive approach is perfect. There are still possessions where we see him take the early shot clock transition three. That's bad. Those may as well be turnovers. In that aspect, he needs to be better. That is where we need to see growth from him. Not only are they more often than not low percentage shots, but they kill momentum way too frequently.

So now that we've addressed that stuff, let's move on to why this shift to Smart being the primary ball handler/facilitator can work. Not only is he the best natural passer on the roster, but he's shown to be very solid when it comes to creating for the Jays as well as in the P&R/pop game with Horford. Here are those numbers:

Last season Smart finished with 273 assists. Of those 273, a total of 149 (54%) went to Tatum and Brown. A total of 44 of them went to the big (Rob/Theis). When you slide in Al Horford, here's what Smart was able to create with that option during his first stint

For the most part, around 20% of his assists went to Horford. Remember, he wasn't the primary ball handler during any of those years. That lines up pretty well to what we saw him do with Theis/Rob last year (16%) as the secondary ball handler. You would think with a healthy Rob in a bigger role and the addition of Horford as a P&R safety valve, that number should end up even higher than 20% since Smart should have the ball in his hands more.

When you ask Celts fans what they want next to the Jays, the answer you get the most is a defensive minded pass first point guard who makes the Jays better and doesn't take shots away from them. Well…..as you've just read…isn't that exactly what Marcus Smart is? When you take a second to actually look at the production and don't fall victim to this weird false narrative, you can see why the team is going in this direction.

As you can see, their shooting production actually increased playing next to Smart. Especially Jaylen. This is important when you remember that a majority of Smart's assists went to those two guys. If your hope is that Tatum/Jaylen continue to take leaps, playing next to a guy like Smart actually helps that happen. That's not homerism talking, that's the actual data.

While this is all the good news, it's also important to stress that for this plan to work, Smart needs to get his shit together on the defensive end. Seeing as how he made All NBA in 2019-20, I think he's earned the benefit of the doubt. Last year was a step back on that end. Whether you want to look at the eye test, the metrics, it all says the same thing. Smart was not the same defender last year that he has been pretty much his entire Celts tenure. Maybe it was injury, who knows. But what he does give Ime is lineup flexibility. You want to run Smart as the PG? Cool. You want some defensive lineups with maybe Schroder at the 1 and Smart off ball? You can do that too. The point is, at his size and ability, the Celts solve a weak link in their defense at the point guard position. Kemba got picked on. Isaiah got picked on. Pritchard gets picked on and it's all due to their size. Sliding in Smart at that PG spot allows you to play bigger and not have someone who is going to get attacked every single possession in a playoff series. That's important.

As we know, everyone loves a good scapegoat. For this team, that has become Marcus Smart. Sometimes it's deserved, sometimes it isn't. I just think it's important to address the fact that during his entire tenure in Boston, we've never seen Smart with this opportunity and role to start a season. There is a foundation of tangible evidence that suggests it can work. That doesn't make it a guarantee, and that doesn't mean he won't do dumb shit from time to time, but guess what. So will the Jays. So will the young guys. No player is perfect. But I think it's important that as we move into this next phase, we should set expectations/opinions based on what they actually do on the court, not what the radio or Twitter trolls scream about. I don't see why that's so wrong.