“It was a great era and boy do I miss it. Boy do we all miss it. Jimmy [Boeheim] and all of us, it’s not going anymore. It’s great being in the ACC, screw that, it’s not great. It’s much better fighting your own neighborhood. The guys you know, the guys you have to recruit against. What caused the biggest problems amongst coaches? Recruiting and then after that recruiting and then after that recruiting. Something is said during a recruiting meeting that’s misinterpreted.”

Listening to Jim Calhoun on PMT was awesome as someone who grew up with the old Big East and the old ACC. That's what gets lost in realignment. Everyone talks about the old Big East, but the old ACC was fucking awesome too. 9 teams, rivalries like Maryland vs Duke, Maryland vs Wake along with the standard Duke vs UNC and the four North Carolina schools. Yeah, the new Big East has been successful but it's lacking exactly what Calhoun was talking about. We need coaches who don't like each other because they are all recruiting the same areas and from the same region of the country. That's what always made college hoops special to me. Don't get me wrong, I love the sport but I miss that. It's very much me being an old man yelling at the clouds, but hey, I am who I am. I'm a guy who watches way too much college basketball and have been that way for 3 decades.

Think about the old Big East. Calhoun, Boeheim, big John Thompson, Lou Carnesecca, Rollie Massimino (turned eventually into Jay Wright), Ben Howland and Jamie Dixon at Pitt. That's what I miss. I want there to be animosity while respect between coaches. Basically I want to see this again. 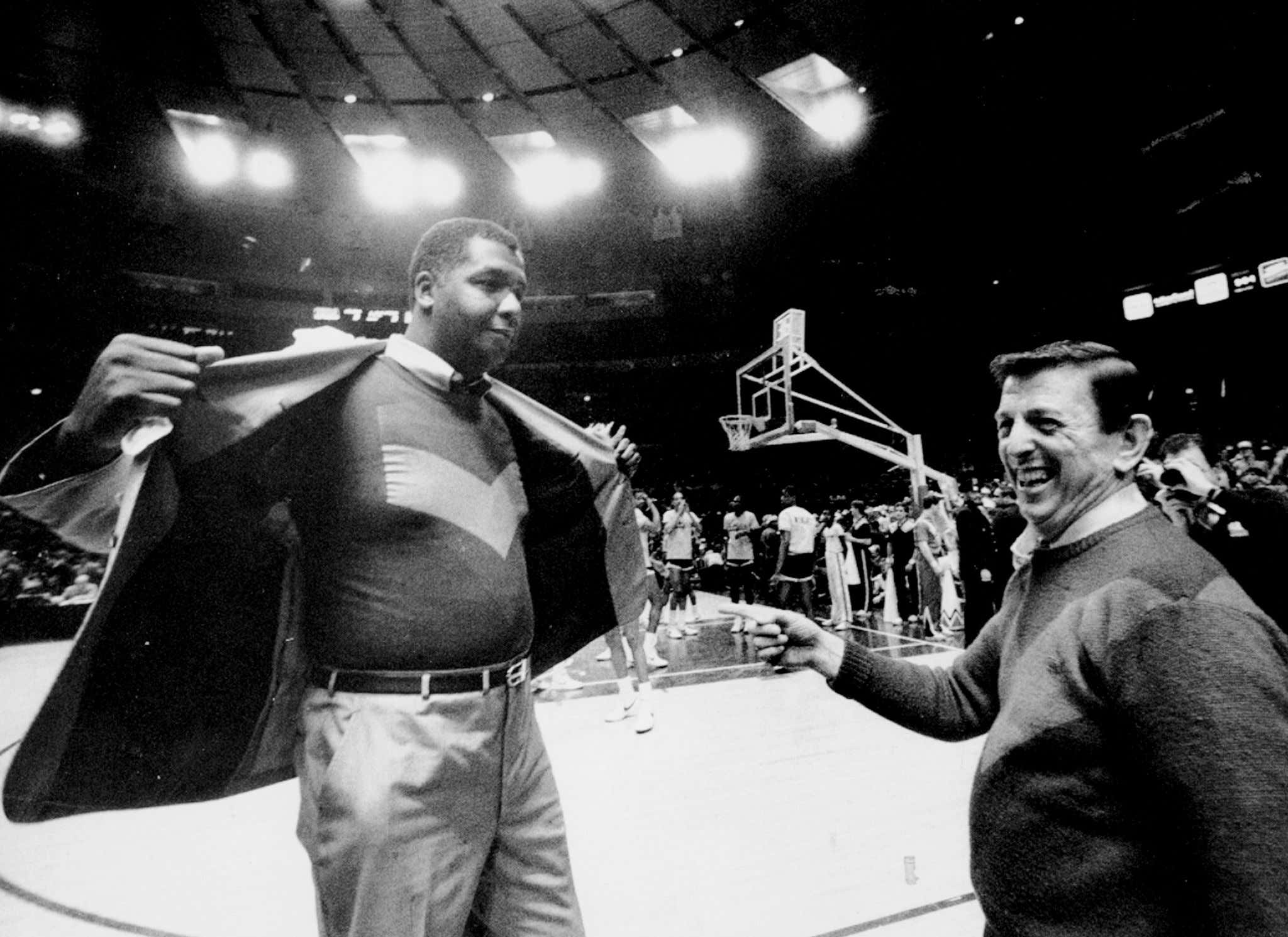 Hell, just look at what Calhoun said about Pitino.

“Pitino, who I don’t like, he doesn’t like me and that’s cool. Tell you one thing, the man can coach. All the other bullshit aside, if you play for him you got a chance to win. I mean that honestly. You don’t have to love everybody.”

We're talking about two of the 5 best coaches in the history of the game here. They didn't like each other. That's fine. It's the way it should be. We're talking sports, it's okay to not like everyone. That's what I miss about the old days. Calhoun and Pitino wouldn't hide it either, but the respect was there. Same goes back to that picture of big John and Lou.

Don't get me wrong, I fully understand the whole money aspect of realignment and that will always be the driving force, but give me that just for college football. College hoops has 357 teams in Division I. I wish there was a way to keep the old conferences. I don't want to see K running form Maryland as much as I hate both programs. I want them to be forced to play a home-and-home. I want the ACC Tournament at Greensboro and the Big East at MSG the way it always was. Preferably with the Aeropostale logo at MSG too.

Listen to that clip again with Calhoun. He does the Jim Boeheim impression which is laugh out loud funny with Calhoun's accent. Then he says how the problems with coaches stem from recruiting, recruiting and recruiting. He's not wrong. That's one of the two major things for college coaches. The other one being pretty simple - winning. We had that with the old Big East and the old ACC. It's not the same to see Pitt, Cuse and BC in the ACC. They are Big East schools. Always will be, always have been.

I could listen to these old school coaches all day. Calhoun won't lie about anything or hold anything back. None of them will. It's what made 90s college basketball and 2000s college basketball awesome. Don't get me wrong, I'll defend this era as well, but not with realignment. I hate that more than anything else with college sports. Give me the old Big East and old ACC back.

Listen to the full interview here.

If you haven't subscribed to PMT yet, what are you doing. Click here.