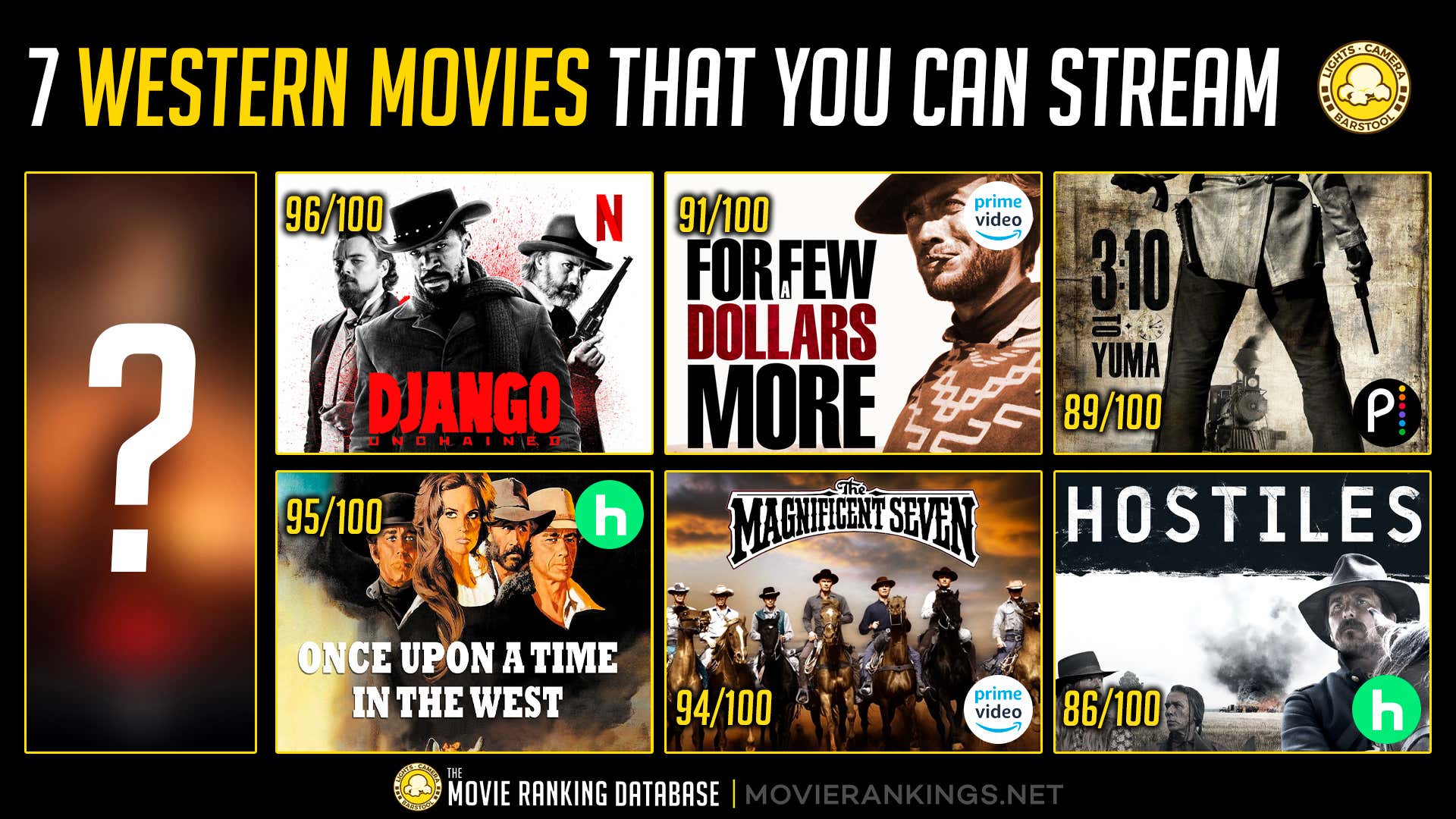 I re-downloaded RDR2 this weekend and I have got a huuuuge hankering for western stuff again. For those of you that also love the genre or are just interested in diving in, here are some movies to watch.

1. A Fistful of Dollars - Prime Video - 95/100 - This is Clint Eastwood's first leading role, and one of the universally agreed upon GOAT western movies. Beyond being independently great, it's story is also ripped from one of the GOAT Samurai movies, Yojimbo. If you've never seen a spaghetti western, I can't think of a better jumping off point than this classic.

2. Django Unchained - Netflix - 96/100 - One of Tarantino's best and a simply outstanding movie. Bad guy Leo was incredible, as was Jamie Foxx and Waltz. The clip below is maybe the one clip you can watch from this movie that doesn't have a slur in it.

3. Once Upon a Time in the West - Hulu - 95/100 - Another older western that is in most fan's top tier, this one is another great story. Sergio Leone, who directed 3 movies on this list, made an interesting change of pace in this one. It's less funny and more serious than anything in the Dollars trilogy, this is a great performance from Western great Henry Fonda and from one of my favorite actors Charles Bronson.

4. For a Few Dollars More - Prime Video - 91/100 - Another Leone banger, this one is actually my least favorite in the Dollars trilogy. However, it's all relative because it is still an outstanding movie. You got Clint Eastwood again with westenr legend Lee Van Cleef and they are both amazing.

5. The Magnificent 7 - Prime Video - 94/100 - This is another classic that was essentially the Avengers of older people movies. Steve McQueen, Yul Brynner, Charles Bronson, Robert Vaughn. Those are legit legends in cinema and they all teamed up for this incredible movie that, like with A Fistful of Dollars, was ripped off Kurosawa. This time it was his best work, Seven Samurai, which is considered one of the best movies of all time. This one has action and dialogue to rival any modern movie, so I highly recommend it.

6. 3:10 to Yuma - Peacock - 89/100 - Among newer westerns, this is one of my favorites. It comes from the director of 'Logan', 'Ford v Ferrari' and 'Walk the Line', James Mangold and has a rather stellar cast in Russell Crowe, Christian Bale and Peter Fonda. Also, one of my favorite actors Ben Foster has an INCREDIBLE performance in it. It was basically his primer to playing Tanner in 'Hell or High Water'.

7. Hostiles - Hulu - 86/100 - Another great modern western starring Christian Bale, this one is a bit more somber and way more of a slow burn than maybe any movie on this list. I think it is incredibly underappreciated and worth watching for fans of Bale or the genre.