I recently moved into an apartment next to a vacancy that I share a balcony. The way the two apartments are set up there was a serious potential for whoever to move in having a problem with my several exotic animals, late-night workouts, and a dog that poops on the balcony (well trained only on a small patch of fake grass). Not that I don’t like strangers, I am able to vibe with everyone, but strangers don’t necessarily vibe with me. I have been telling people I know who are looking at new places to move in. Rather have someone I know live next to me than some random who would most likely not be chill.

Through word of mouth and trial and error I now have a new neighbor, 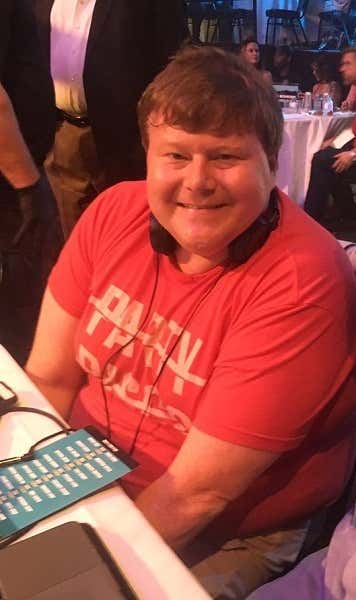 Now, this is actually not a joke or prank. The Fran and Mintz roommate thing was a prank, I promise this is not.

At first, I didn't believe Mintz was actually going to look at the apartment. That was until one morning in bed I heard that sweet southern drawl outside my window. Mintzy was touring the place.

Even though Mintz and I have over a 16 year age difference, we have many interests in common such as grilling, fitness, and sports which is more than enough for 2 dudes to chill.

Anyway, after Mintz looked at his new place I showed him around mine and he noticed how I had a squat rack and weights in my kitchen and asked if it would be cool if he worked out with me. Now trust me my kitchen is not very large. I live alone and there's just no point in putting a dining table in that space for 1 guy. A squat rack is much more efficient. Maybe Mintz will get a dining room table in his apartment we can have dinner in now that he's living there. Now that Mintz wants to work out with me there's huge potential for me to put on serious mass because I will have someone there to spot me (wasn't going for any max bench or squats alone) and Mintz will continue the insane transformation he's been on since his drinking days.

Ben has dropped a ton of weight, and he says he hit a plateau and would love for me to help him get to the next level. He asked me to actually be in charge of buying all the food for the both of us and he will work out with me.

What he doesn't realize is I have already devised a complete diet, supplement, and exercise plan that I have been trying to get Big Cat and PFT to fully commit to for years. Now I have the perfect opportunity to control all the variables and turn Ben Mintz into a lab rat turned muscle hamster.

I now control Ben Mintz's diet and exercise so basically, he is my pet. I am going to pump this guy full of creatine, get him squatting heavy and see what happens. We are about to add muscle mass onto that newly slimmed Mintz frame and it's going to be awesome.

Lots of stuff in the works, expect to see some before photos for Mintzy soon. The Mintzy Experiment is about to begin.