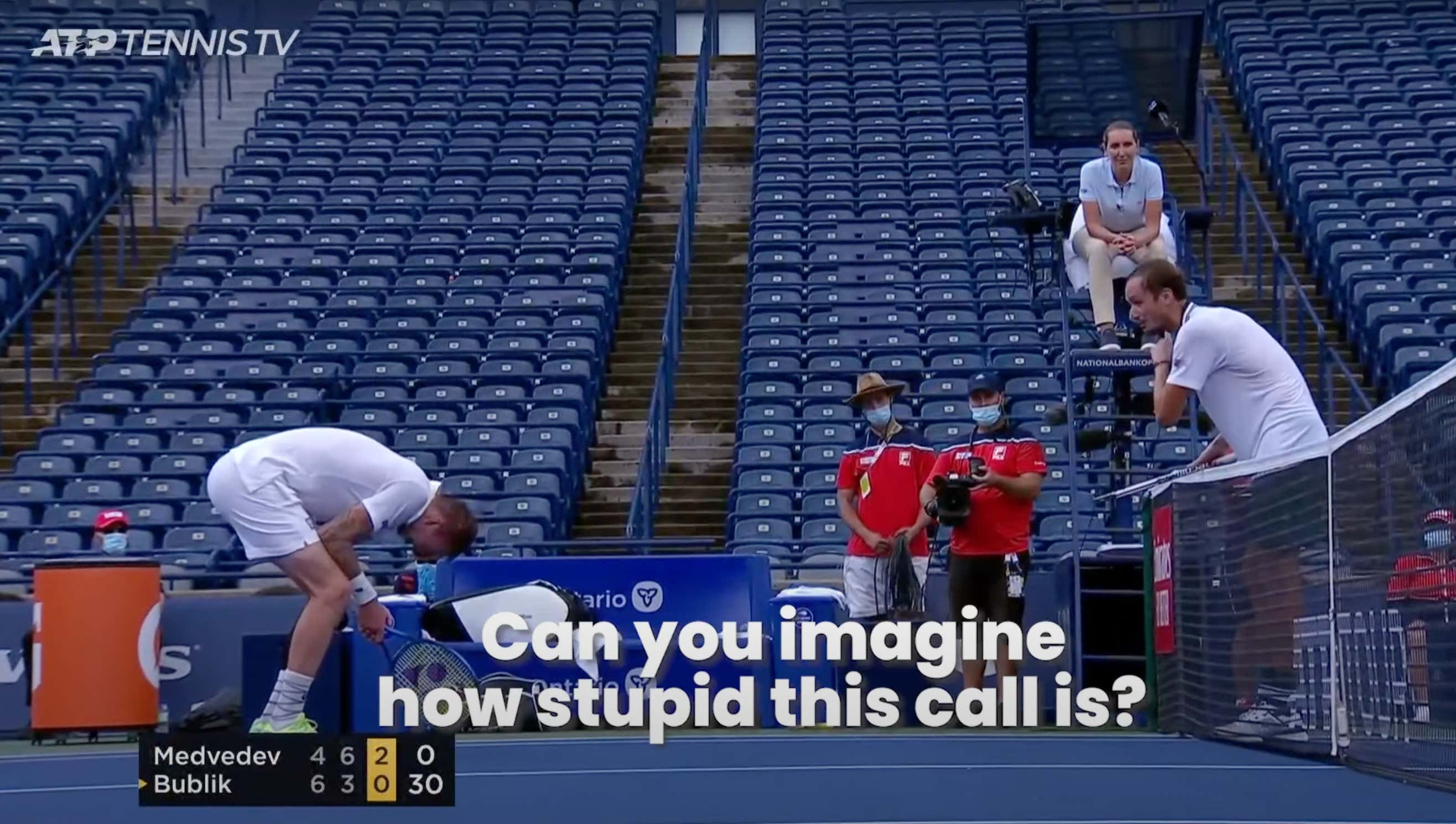 We had ourselves an incredible tennis moment yesterday between World number 2 Daniil Medvedev and Alexander Bublik. The two friends were battling it out in the 3rd set of their match up in Toronto when the umpire made a ridiculous call of hindrance. Medvedev fired a ball right at Bublik that seemed to clip him and bounce straight for Medvedev to slam down for the point. Point Medvedev, yes? The only problem was that the head chair umpire decided to make this an ump show. See for yourself this ridiculousness.

Hindrance was called as Medvedev uttered "sorry" right as he was slamming the ball down. Bublik was on the ground, incapable of moving to any ball. Hindrance is called when you talk during the point and distract the opponent. That was simply not what was gong on here, but the umpire decided to follow the rule by its definition and ignore any kind of common sense in the moment. Daniil talked about it after the match…

"For me, the thing is that either they should change the name of the rule, because "hindrance," I looked at it on Google Translate, because I was not sure what it means. I thought it meant disturbance, like to disturb somebody. I was right. You can ask Bublik if I disturbed him by saying "Sorry." He will say no. I had the smash, which I would never miss in my life. I actually put it away.

Even if he jumped like, he couldn't get the ball. So again, there was no hindrance. There was no disturbance. Yeah, it's about the rules. Same about the rule where if the rain stopped the match for one hour or 45 minutes, why do I still have no toilet breaks left? It's a new match. I mean, there are some rules that should maybe considered to, I don't know, to be more precise or whatever. Because again, there was no hindrance. So, yeah, that's all I have to say."

Medvedev is consistently a lunatic but also incredibly hilarious at the same time. He's also a big fan of using logic to show how stupid tennis rules are at times. He did it also with the bathroom rule earlier in the match.

But the best part of this clip is Bublik laughing his ass off the entire time. I'm pretty sure he didn't even hear the "sorry" initially and had no clue in the world what was going on. He thought the umpire called hindrance on him at first! Medvedev simply could not believe what was happening and mocked the umpire. Luckily the point wasn't crucial as he said in his post match presser and they were able to move on, but man that's a trash call.

P.S. If tennis was as popular as let's say the NBA in the states Medvedev would be one of the more liked sports personalities in the country. Super star talent but also fantastic persona.