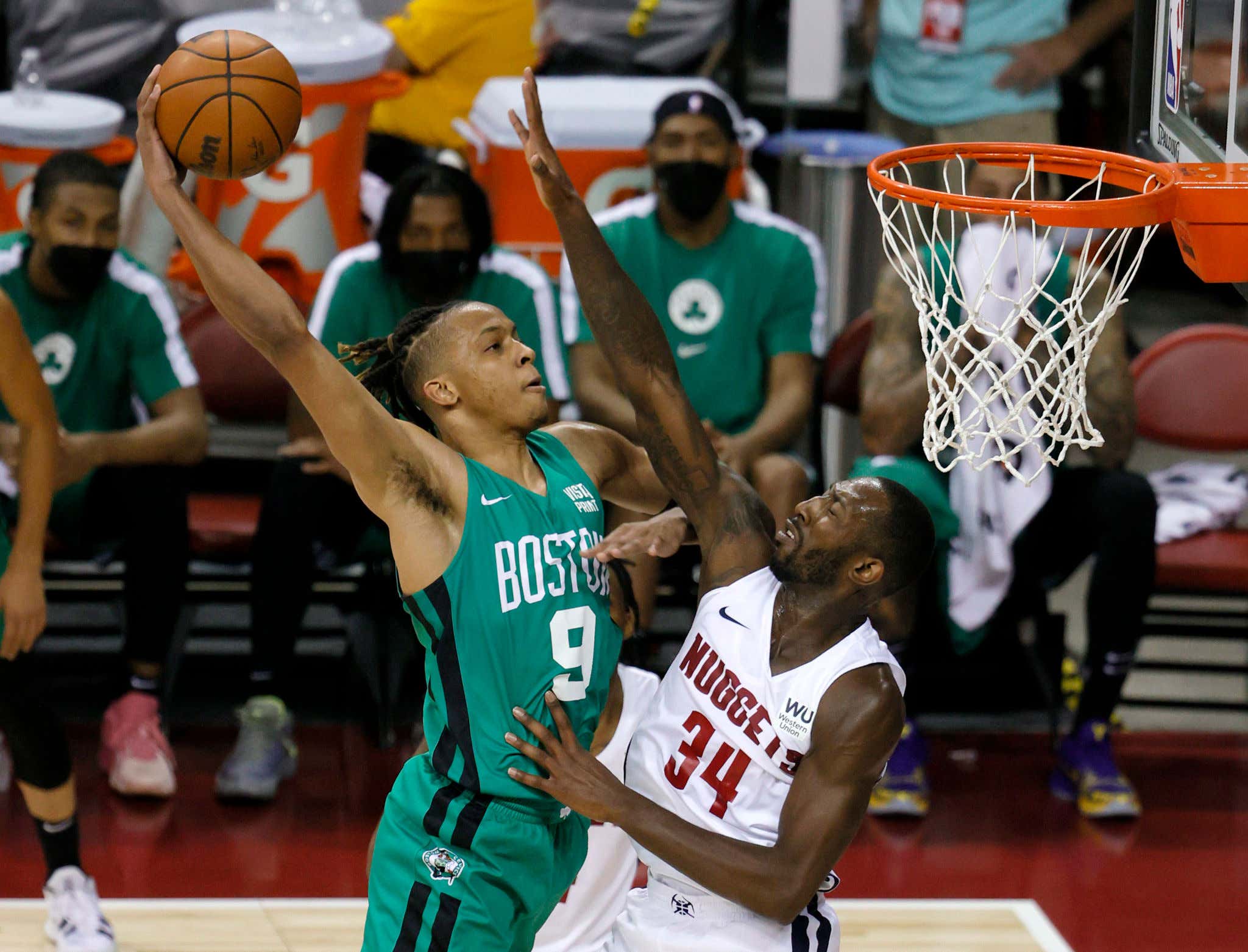 To say things have gotten off to a good start for our beloved Summer Celts out in Vegas would be a gigantic understatement. Game 1 gave us a wire to wire battle where we had to see the Celts lock in defensively down the stretch and it was capped off by a Romeo game winner. Given how last season went and how many close losses this team had (26), it was great to see. Game 2 gave us a complete and utter ass kicking right from the opening tip. There was no blowing double digit leads, only domination. And sure, there will be people in your mentions or in the comments of this blog that say shit like "WHO CARES IT'S SUMMER LEAGUE" like I'm supposed to give a shit? Guess what, it's OK to be excited when your favorite basketball team plays well. It's OK to actually enjoy watching this team play basketball. Nobody is making any grand proclamations after two Summer League games. But there is no denying that the Summer Celts have looked awesome to start. Pretty much everything you were hoping to see during this time of year has shown up through the first two games. Who couldn't love that?

It takes a strong individual to not completely let yourself drown in Summer League hype. It comes for the best of the best. We're inching closer and closer if you ask me. You can feel it run through your veins with every good performance we see. It's a magical time of year for every fanbase in the league and that's what makes this event so much fun. Yes I said fun. In a sentence talking about the Boston Celtics. Remember fun? Love fun. And few things were more fun than what we saw in Game 2 so let's talk about it.

- Brad and Ime always talk about how the direction of the team is all about surrounding both Tatum and Brown that bring the most out of them. A few days ago I had a take about how to do that, and it revolved around Aaron Nesmith. I think it's time we see him start. When they traded for Josh Richardson a lot of people felt that was for him to be a starter. But listen, if you want to maximize the Jays, I don't think you can surround them with so many non shooters. That's only going to clog the lane for either of them to drive. You know who can shoot? Aaron Nesmith. You know how I know that? Just watch.

I'll say it again. Last year Nesmith shot 37% from three. He shot 46% from three over the last month once he started to get real, consistent run with the starters. Here we are a few months later and look at that man. Sniper like you read about. This is the skillset I want to surround the two Jays with. If defenses don't respect Nesmith's shooting, he'll simply bury a three right in your eyeball. Game 2 was much more along the lines of how I hope Ime ends up using Nesmith. Game 1 was a lot of passing him the ball with 1 second left on the shot clock which forced him to jack up a low percentage contested prayer. Last night was completely different. He was catching the ball in rhythm, he was coming off screens, he was nailing spot up opportunities, it was everything you should want to see from Nesmith and more in terms of his offense.

When it comes to second year players, you hope they look a cut above when playing in the Summer League. Even though this is technically their first Summer League, we've seen that so far with Nesmith and Pritchard. What I really liked about Nesmith's night last night was everything was done with confidence. He shot the ball with no hesitation, he drove to the rim with confidence, and the mental part is half the battle. There was no second guessing if he should take a shot or make a play. He just did it. That's not only experience, but also a sign that he's seeing the game better.

- On one hand, I thoroughly enjoy watching Payton Pritchard ruin motherfuckers on the basketball court

but on the other hand, I feel like we can put him on ice now. We've seen enough, he's ready. It's quite the dilemma for your brain.  Pritchard has been without a doubt their best player through the first two games and looks poised for a fantastic Year 2. We knew he could shoot, but what I liked last night was what he showed us as a playmaker. That was one of the items on my list for him. While he's most likely going to be used as a shooter/off ball guard, I do think he can grow as a playmaker and an initiator of the offense. That's the next level for him. He already has a great handle, he already can score at all three levels, and from the looks of it we're seeing him take leaps as a passer. That's encouraging.

I don't know about you, but I'm at the point when watching Pritchard play that I am legit surprised when he misses. Doesn't matter where he shoots it from. There have only been a handful of Celts players I've ever thought that about, and he's one of them.

- Ime keeps talking about the ball movement, we all know it needs to be better, well how about 25 assists on 40 FGM. That'll do the trick. Even Carsen was playmaking (5 assists). They won't always shoot 50/46% with 15 3PM, but considering at least 4 of the 5 starters on this Summer League roster will get rotation minutes, their willingness to pass the ball is great to see. Now we just need the big guns to keep that going, but there has been way less isolation through two games than I initially thought we'd see.

- The Romeo Dunk. Watch it. Enjoy it. Watch it again. Tell a friend. Tell two friends. It was that awesome

Romeo didn't do too much else in this game but boy was that thing sweet. It just shows you what this kid is capable of. He's still raw, there are areas of his game that need to get a whole lot better, but the potential is there. Whether it's as a shooter or a slasher who finishes strong at the rim, Romeo has had himself a decent start to what is a very important Summer League for him.

- I have no idea what the future holds for Bruno Fernando, but his Celts debut wasn't half bad. He's a huge body, he had a couple of nice offensive rebounds/putbacks, and as a 4th big I'm a little intrigued. Based on the reports you see who knows if he's still on the roster come opening night, but I thought he was more than solid in his 15 minutes lat night. A nice little 9 points, couple rebounds and assists on 4-5 shooting, not terrible!

- One more thing about Pritchard. He has 16 assists and just 1 TO through 2 games. That feels good.

- As awesome as Nesmith was on the offensive end, defensively we're still a work in progress. Too often are we seeing him get blown by off the dribble. If that's happening against Summer League talent, it's probably going to happen against real NBA talent. It'll be interesting to see how that impacts his playing time once the real games start up. As we know with Brad, he didn't give a shit what you looked like offensively if you couldn't hold your own defensively. If you could defend on a consistent basis, you played. Will Ime be the same way? If Nesmith wants to find himself getting consistent minutes, he has to be better on that end. Especially when it comes to his on ball defense.

- While I thought he did well in other areas outside of shooting (8 rebounds, 5 assists), it was a tough shooting night for Carsen. Just 5-16 overall, I wouldn't say he played bad but for a guy that has a role of being a shooter off the bench, I'd like to see him get that efficiency up. Half his shots were threes which doesn't really bother me (3-8), but I'd say he was better in Game 1 than Game 2.

- The same is true for our guy Yam. Last night was a nice reminder of just how young he is and how far he still has to go. After making a huge impact in Game 1, it was the exact opposite in Game 2.  He didn't hit a shot in his 15 minutes off the bench, had a couple of poor turnovers, and through two games the one thing I've noticed is he struggles to pass in tight spaces. That's most likely an adjustment thing after coming over, but it's been noticeable. Too often we see what should be easy passes get deflected by defenders, especially on the perimeter, because of where he's locating the ball.

- I don't have the numbers, but I'm pretty sure these Celts bigs lead all teams in bobbled passes as they roll to the rim. Makes no sense to me. Just catch the ball. Every night there's probably at least five potential assists we see get blown because a dude can't catch a pass as he rolls to the rim. It's not great.

- Much like Yam, it was a rough night for the other young international prospect on this team in Juhann. He struggled from the field (1-5) had a couple of bad turnovers as well, and it felt like he didn't make the same sort of impact defensively like we saw in Game 1. Again, he's 18 so who really gives a shit considering he's a stash guy anyways, but I wouldn't exactly say he built off his solid Game 1 performance.

- What do we even put in this section considering the Celts were nearly up by 30 at one point in a goddamn Summer League game? I guess we could go with the fact that they had no answer for Bol Bol. What an insane talent that guy is. He's a unicorn player. Watching him move and score with ease the way he did at his size was remarkable. It felt like he was going half speed at best and he finished with 26/9 on 8-12 (3-4). The Celts had no answer for that guy.

So here we sit, 2-0 and heavily intoxicated on Celts Summer League Kool Aid. I have to admit, it feels great to have these feelings after watching this team play given what we all lived through last season. That shit was rough, but things are looking up and it all starts with Summer League. I dunno about you, but I cannot wait for tomorrow.