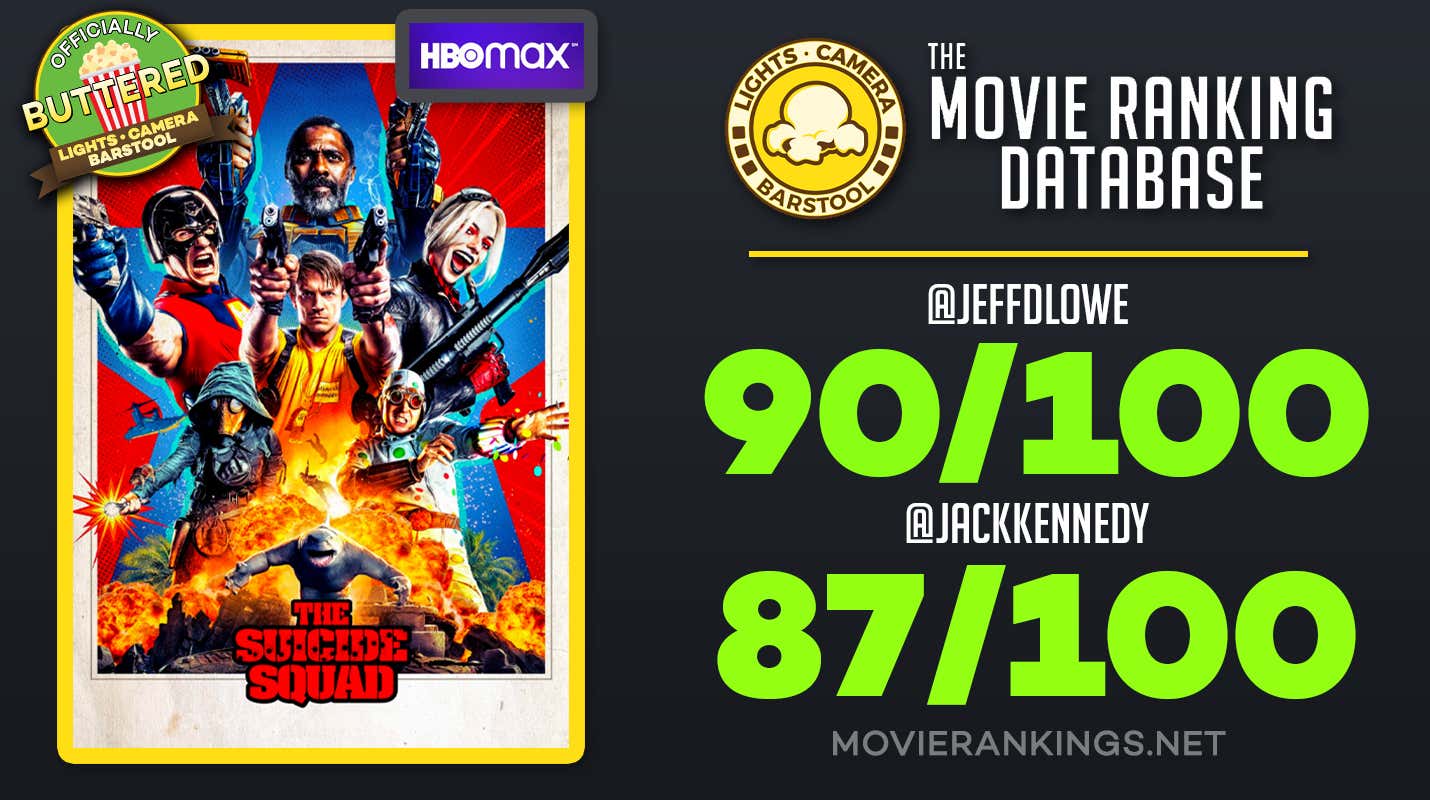 Remember the first 'Suicide Squad' movie? It sucked as. This one? Well…

Task Force X — a.k.a. the Suicide Squad — is dropped on the remote, enemy-infused island of Corto Maltese to find and destroy Jotunheim, a Nazi-era prison and laboratoy. (via MovieRankings.net)

Jeff D Lowe (90/100): This movie is an absolutely insane, wild ride that will have you on the edge of your seat until the credits roll. James Gunn's construction of this movie, throwing the audience off its axis while being tossed around be a blast of a story, is what makes this movie work. Would a normal, linear story have played? Yes, the characters are likable, there is a ton of humor, and the R-rated action is fucking crazy, but the creative way in which the story plays out pushes this movie over the top.

Also, if you can, see this movie in IMAX. Don't waste your time at home. This is a movie meant to be seen on the biggest fucking screen possible!

KenJac (87/100): I feel like talking about this movie, I almost want to go backward before going forward. So let's go back like two years. The DCEU is losing the battle to marvel. Their origin movies are ok at best, justice league is a bummer. And most importantly, the original suicide squad fucking sucks ass. So why were we all pumped up for this movie?

The simple answer is James Gunn. We all saw what he did with the guardians of the galaxy, and we're excited to see that same touch applied to DC characters. And I think he really lived up to that expectation we had for the movie. He was able to give us that ensemble cast magic that we wanted, but also what I was most impressed by was how different this was.

We talk all the time about how it would be stupid for DC to try to replicate marvel, and I think this movie captures that idea perfectly. It completely found its own lane in the presentation, the humor, and the general feel. You get some lines or cues every now and then that might remind you of guardians, but the execution is still very unique with great action, drama, and characterization. It’s the best DCEU movie so far, in my opinion

The only place I take away some points is that the general government coverup thing isn’t a super new angle, it felt a little bloated at a few points and I didn’t love the music selection. And that might be biased because I was expecting guardians level music, but this wasn't that type of movie and I'm sure it was a goal to not remind viewers too much of guardians.

The star of this, to me, was John Cena. It’s funny because we see him act like shit in movies like Fast 9 or bumblebee, but he is so fucking good in roles like this where he can let his comedic delivery shine through. But beyond that, he was also really good in the dramatic scenes here too like the standoff with flag and rat catcher!

Overall he impressed me the most along with Daniella Melchoir as Ratchatcher 2. It's a really entertaining movie that deserved better than a simultaneous release. And I think the performance of this is going to affect the rest of the WB release plans because I'm sure they don't want this for Dune. They only made like four million dollars than 'Mortal Kombat' opening weekend and that's just not tenable.

--
The movie is Officially Buttered, and one of the best Comic Book Movies of the last few years. See it in theaters! Go to the movies! Have fun! You can head to Lights Camera Barstool right here to listen to our latest episode where we discussed the movie in full with Coley Mick.