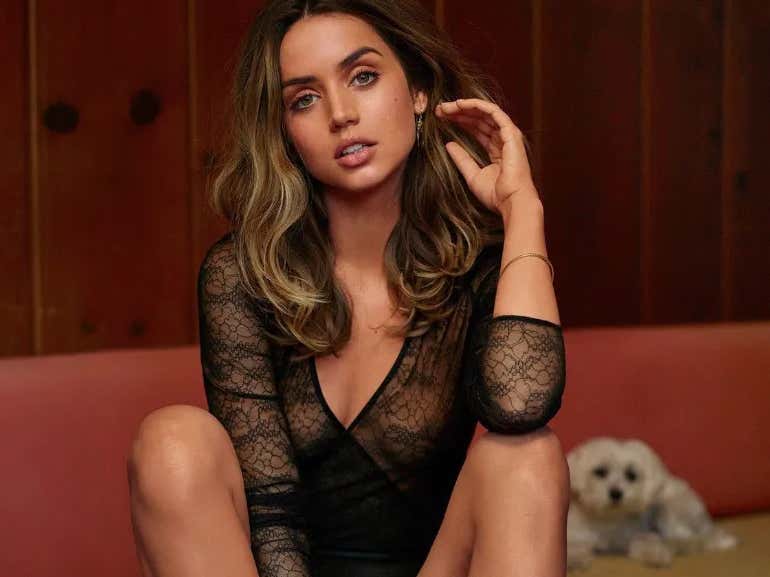 Ana de Armas is one of the most beautiful actresses in the world. That's a statement of fact. Beauty might be subjective, but hers is objective truth.

Marilyn Monroe is one of the most desirable women that ever lived. Also objectively true. She was the inspiration for more self-inflicted O-faces among the men of The Greatest Generation than decades of free online pornography has among Millennial and Gen Z incels. She was the woman other women aspired to be. And the inspiration for famous men like Joe DiMaggio, JFK and RFK to claw their way to the top of the PussHound food chain in order to claim her as their prize.

So, it follows logically that if you're going to do a biopic about Monroe, you couldn't do much better than to bleach de Armas' hair, paint a beauty mark on her, step back and let her work her magic. Which someone has wisely done:

Netflix is wrapping production of Blonde, directed by auteur director Andrew Dominik. Which they reportedly pulled for no reason they've made public, according to ScreeRant:

Ana de Armas' Marilyn Monroe biopic, Blonde, has been delayed to 2022. …Though the supporting cast impresses with names like Adrien Brody and Julianne Moore, Oscars chatter for Blonde has largely revolved around director Andrew Dominik, whose last two films Killing Them Softly and The Assassination of Jesse James by the Coward Robert Ford received wide acclaim. Dominik is also noted for his selectivity, making only four narrative features over the last two decades. …

Variety reports that Blonde's release date has been pushed back from this fall to 2022, with no reason given for the delay. Though no exact date has been set, it's safe to assume Netflix will position it for next year's awards season in order to properly campaign De Armas and Dominik for Best Actress and Best Director at the 2022 Oscars.

So we "assume" the reason for Netflix kicking the can down the road is that they think they can win Oscars with it next year? A bold strategy given that right now de Armas is one of the hottest talents in Hollywood with a huge role in the next 007 movie.

And that the Academy Awards last year had about as many viewers as the Olympic Handball semifinals and nobody gives a tuppenny fuck who wins awards any more.

But tech company executives make strange decisions for weird reasons. Except it would appear the reasons for this particular move might be a lot weirder than chasing Oscar hardware:

What? A "sexually graphic" movie about the most iconic sex symbol in the history of pop culture? Oh no! No wonder they're "absolutely horrified"! Oh, the humanity! Imagine showing graphic sex in a movie about a free-spirited, independent woman who consensually boned Hall of Famers and world leaders. Who changed the culture forever by in the first issue of Playboy, and then became the first actress to prove everyone can see you naked and it won't ruin your career, because they'll still buy tickets to see you with clothes on. We can't be having simulated sex by actors pretending to be doing it in a film about this sexy icon!

Speaking of … the children, this would be the same Netflix that greenlit Cuties, a movie about a preteen dance troupe that might be a darling of critics (88% on Rotten Tomatoes), but horrified viewers (16%) who mostly say it's shameless, unfiltered kiddie porn. And have refused to take it down or edit the parts that supposedly have the most appeal for its target audience of guys who frequently walk into kitchens where Chris Hanson is telling them to have a seat. But this one? A film telling the life story of a real woman who had a lot of sex? With an all star cast and an acclaimed director? That's crossing a line, by gum. And Netflix will not stand for it.

I've said it before and I'll say it now. Hollywood once had a proud tradition of nudity in movies. Starting in the 1960s, once the codes were loosened up around the time of Vietnam, respected filmmakers and admired stars appreciated that they can make great art that included naked human bodies. Sometimes even gratuitous nudity, just because the public wanted it. Now it's like we're back in the days of censorship. Maybe because of #MeToo or PC culture in general or what, but the pendulum has swung so far, it's like they're back in the days of the moral codes. Only this time it's voluntary.

Meanwhile, due to some sort of bizarre reverse logic, cable TV is going in the other direction. In the early '90s we'd all watch HBO's Dream On, which wasn't very funny, but gave you the unspoken guarantee they'd find a way to work in a superfluous boob or six every episode. Now it's pretty much full frontal everywhere but on C-SPAN (thankfully).

While the streaming services like Netflix are still crawling along blindfolded, trying to feel for where their line is drawn. So Cuties and a series literally called Sex/Life, filled with guys hanging massive brain in shower scenes is cool, but a hot actress depicting Marilyn Monroe in bed with a guy is verboten.