Joel Youngblood makes baseball history by collecting hits for two teams in two different cities. Youngblood gets a hit off Fergusson Jenkins of the Chicago Cubs at Wrigley Field, starting the day with the New York Mets. Traded to the Montreal Expos during the game, Joel Youngblood later gets a hit off Steve Carlton of the Philadelphia Phillies in a night game at Veteran’s Stadium.  Both hits would come against future Hall of Famers.

Joel Youngblood batting with the New York Mets at Wrigley Field and later with the Montreal Expos at Veteran’s Stadium on the same day.

Born August 28, 1951, Joel Youngblood was a blue-collar type baseball player who was a true utility type player. Drafted by the Cincinnati Reds, he made his major league debut during the 1976 season, playing with many legends from the “Big Red Machine.” The following spring Joel Youngblood was traded to the St. Louis Cardinals for minor leaguer Bill Caudill. Youngblood struggled in St. Louis and was traded to the New York Mets two months into the 1977 season. The acquisition of Joel Youngblood for Mike Phillips was part of an earth-shattering day for the Mets. It was one of three midnight deals on June 15th that saw Tom Seaver traded to the Reds for Pat Zachary, Doug Flynn, Dan Norman, and Steve Henderson, while Dave Kingman was sent to the San Diego Padres for Bobby Valentine. To make room for Youngblood on the Mets roster, Player-Manager Joe Torre retired from playing. In six seasons with the Mets, Joel Youngblood hit .274 with 38 home runs and 216 RBI. His best season was in 1981, when he made the All-Star team for the only time in his career, batting .350 in 143 at-bats. 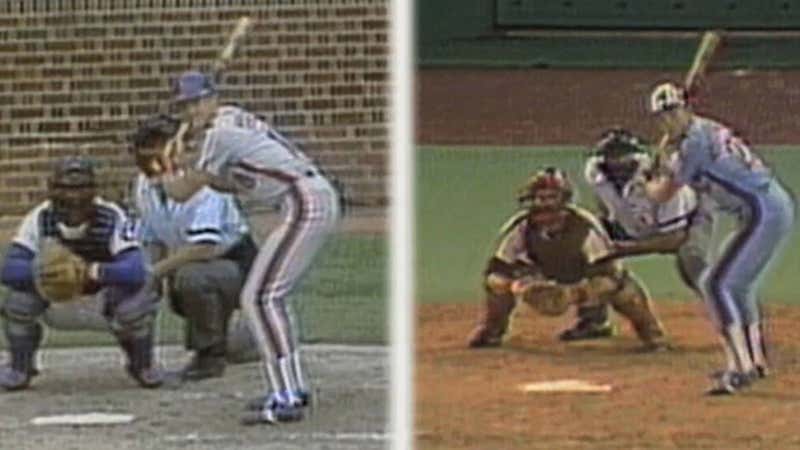 The trade to the Expos was a whirlwind day for Joel Youngblood, who begins it playing for the New York Mets against the Chicago Cubs at Wrigley Field, wearing #18. In the game, Youngblood, batting third, starts the game in Centerfield.  After striking out in the first inning, Youngblood collects a single off Ferguson Jenkins in the third inning driving home Craig Swan and Wally Backman to give the Mets a 3-1 lead. In the fourth inning, Youngblood, informed of the trade, is replaced in Centerfield by Mookie Wilson. The fifth-place Mets would win the game 5-4, improving to 46-58 on the season. Acquired by the Montreal Expos for a Player to be Named Later, Joel Youngblood quickly met his new team, who was playing a night game in Philadelphia at Veteran’s Stadium. Youngblood, assigned #25, would arrive in time for the game and entered it in the sixth inning, replacing Jerry White in Rightfield in the sixth inning. In his first at-bat in the seventh inning, Joel Youngblood collects an infield hit off Steve Carlton. He would be on deck when Tim Raines was retired for the last out as the Phillies won 5-4. The loss would drop the Expos, who were in fourth place, to 54-50 on the season.

Joel Youngblood would be a rental for the Montreal Expos, who finished the 1982 season with a record of 86-76, finishing in third place in the National League East. In 40 games with the Expos, Youngblood hits .200, without a home run and eight RBI. The Mets would go in a terrible slump after the Youngblood trade as they endured a 15-game losing streak at the end of August, on the way to finishing in last place with a record of 65-97. The Mets would receive pitcher Tom Gorman on August 16th in return for Joel Youngblood. Gorman would play prove to be a serviceable reliever for the Mets over the next four seasons, posting a record of 11-9 with a 4.10 ERA in 98 games. Joel Youngblood would sign with the San Francisco Giants in the off-season, where he would spend the next six seasons before finishing his career with the Cincinnati Reds in 1989. A year after Joel Youngblood’s departure, his #18 would end up on the back of Darryl Strawberry, who played a key role in the Mets 1986 World Championship.