Purdue Pete? I'd say Purdue Smells-Like-Feet on account of all those students living in conference rooms together.

West Lafayette, Indiana? More like That's Whatyagette,,, In-HELL if you ask me...

Anywho, the video above that shows incoming freshmen being housed in the basement cubicles at Initech already has nearly 4.5M views on TikTok after only 3 days. Clearly whoever shared the video didn't read the banner they hung up down there… 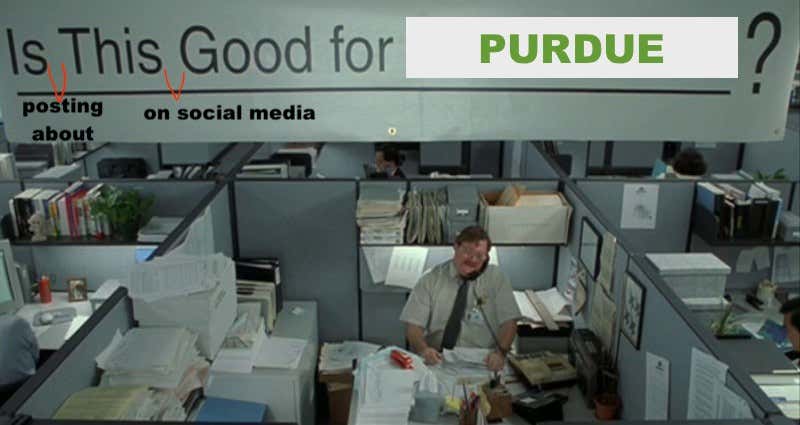 Speaking of - that person wishes to remain anonymous but the student who shared it to TikTok on their behalf, Tyler Trostle, confirmed it was recorded within the last week.

I had asked him if that video was recent because when I looked into it myself I saw that Purdue had gone viral for the same issue before back in 2018:

And yes, they still have to pay to live here.. 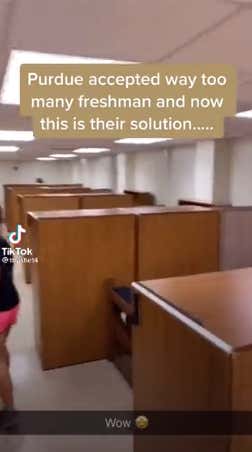 According to their "Auxiliary Rooms" website it will cost the same as the 'lowest double room rate' with the rate being adjusted higher once they move to a permanent space (which could be as late as October). Imagine coming back from a homecoming party late at night with a romantic bang partner & you've got the spinnies & you've got nowhere to go besides a crowded bunk room surrounded by people who will yell at you if you crinkle your drunk-food wrappers too loud… nightmare fuel. That's so many more people who might steal your ramen.

The Journal & Courrier covered the story regarding the 'Reconfigured Spaces' rooms (dorm rooms with 3 - 4 students placed in 2 person rooms) but didn't mention the approximately 50 students in the 6 - 10 person rooms from that viral video.

With the largest incoming class in the past 40 years of Purdue history set to arrive this fall, the University Residences department had to make some changes to accommodate the upcoming 10,000 freshmen.

One priority necessary to expand capacities for on-campus housing was turning rooms made for two people into ones that can hold up to four.

"So a typical double room would typically have two students assigned to it," Barb Frazee, assistant vice provost for student life, said. "But this year, we'll be having about 600 (students) in 200 rooms that are doubles or triples."

I think this guy summed that story up best:

Naturally, the comment section back on TikTok had many making key comparisons & observations, & asking important questions like who gets to decide when the lights go off at night. 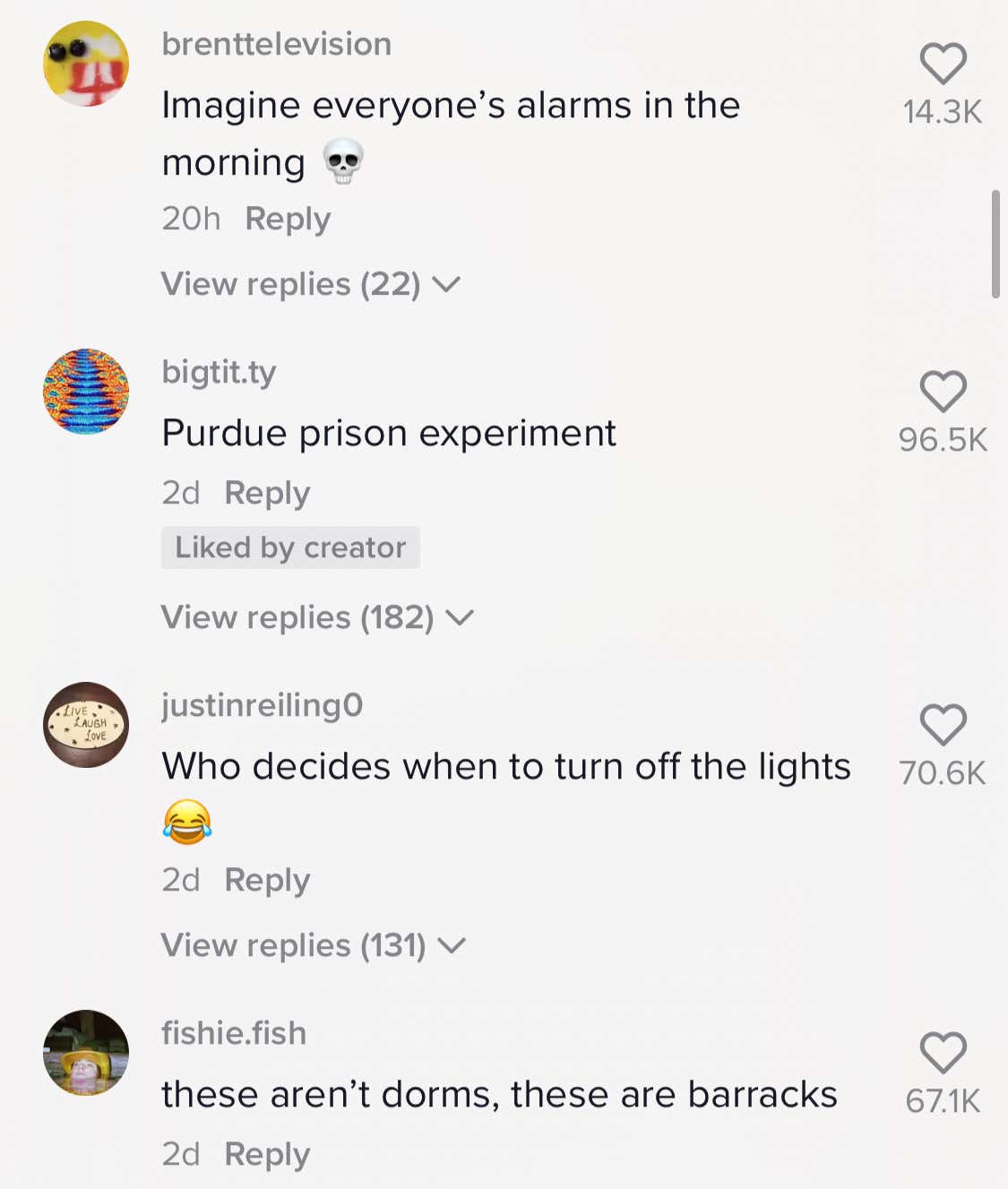 Now, I know it's tricky for schools to gauge exactly how many students will be showing up in the fall, especially in the wake of Covid, but looking into it this has happened at Purdue in 2016, 2018 & again this year. And I know there will be hardos reading this going, "Pshh… Soft. They have a roof over their heads. So what. Why back in my day we had to share a BED with 10 other students in the middle of a SWAMP and we LIKED IT."… but I'm just always baffled by schools with huge endowments skimping on their students' basic quality of life. As of April 2021, Purdue was ranked #38 wealthiest in the nation with an endowment of $2.522 BILLION. Yet here they are giving the Barstool Indiana U & Hillsdale U (???) accounts easy fodder… For shame!

Back to that TikTok poster Trostle, he also took heat on account of those Barstool posts but is thankfully handling it well…

In closing, shoutout to the students stuck in those rooms for now. As a gal who once lived in an asbestos barracks (they had us sign papers saying we'd never been exposed to asbestos & then promptly moved us out of said barracks & blocked the whole building off & that's how we figured out it had asbestos in it) & has bunked in large squad bays with all sorts of weirdos (I was probably one of them) I feel your pain but hey, some of my favorite people & memories of all time came from those circumstances. Just hope there's enough outlets & closet space for all of you.