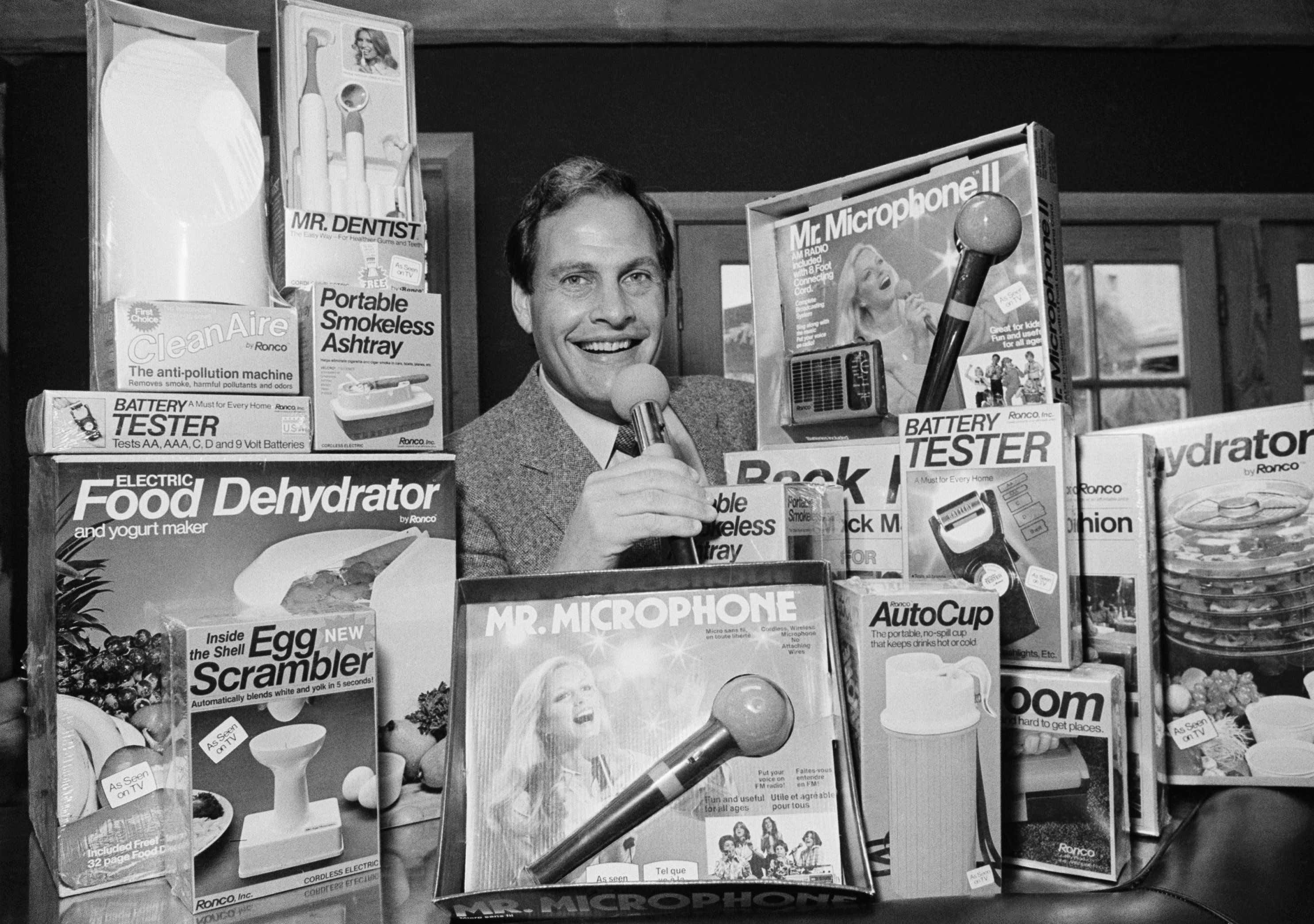 I acknowledge I'm a day late on this story. But there have been a lot of other things going on. And when one of the most successful, innovative and iconic businessmen of the 20th century passes away, no moment is too late to pay him tribute. The late, great Ron Popeil could be as dried up as a slab of meat from his legendary Beef Jerky Machine and the time would still be right for an homage.

AP News - Popeil died “suddenly and peacefully” Wednesday at Cedars Sinai Medical Center in Los Angeles, his family said in a statement. He was 86. No cause of death was given.

Popeil essentially invented the popular image of the American television pitchman, whose novel products solved frustrating problems viewers didn’t know they had. He popularized much of the vernacular of late-night TV ads and infomercials, with lines like “Now how much would you pay?” and “Set it and forget it.”

For a Boomer who grew up in front of the Electronic Babysitter as I did, Ron Popeil was as ubiquitous as … well, there is no contemporary equivalent. One, we don't watch a minute fraction of the hours of commercials we used to in the pre-streaming, pre-DVR and even pre-clicker era. Two, even the most familiar product pitchers we have now, like Flo from Progressive or Jared from State Farm or whomever, appear during regular television. During "Jeopardy!" or sportsball games. Popeil slung his products strictly during garbage TV. Reruns and old movies, late nights and weekend afternoons. It's like he figured out that if you were lazy and unambitious enough to be sitting in front of the idiot box watching dreck like "F Troop" or Jerry Lewis movies, you were dumb enough to buy anything. And therefore, his target audience.

And the crap he sold became part of the culture. Even the crap where he didn't appear in the ads. His line of Ronco products were a language we all spoke. A joke, to be sure. But a joke Ron Popeil was in on. A hundred years earlier, he would've been selling miracle medicines and hair tonic to a small town full of rubes out of the back of a wagon. But he lived in a time where he could reach tens of millions at once. But he still understood he had to put on a show to hold our attention. Part brilliant inventor, part carnival barker, all businessman.

It's called Show & Tell, and all we're hearing is a lot of talking. So allow me to present his most famous products. In no particular order, because I could never possibly rank them:

This one filled a void that many of us never realized existed inside us. The need for spontaneous fishing. Because you never know when you'll find yourself walking home from school, taking the train to work, or going shopping when you suddenly get overcome with the need to cast for some trout. Preferable with a device that gives you no leverage as you try to reel it in.

Hair in a Can

This one preyed on two things: Male vanity. And vain men with no concept for how analog TV didn't show the contrast between light and dark. So a bald spot would magically disappear. To anyone who wasn't standing next to you looking at the spray paint you just put on your dome.

I can remember the names of about 10% of the people I meet on a weekly basis. But I know every word, voice and inflection in his ad like it's a favorite song. And I'm not above doing a "Hey, good lookin'! I'll be back to pick you up later!" when I've dropped off a loved one, knowing the joke won't land with anyone under the age of 50. There's a great early "Simpsons" episode where Homer buys one for Bart for his birthday, which he throws right in the trash. Until Bart realizes he can use it to prank the Flanders' kids that God is talking to them and make the whole town think he's a little boy stuck down a well. In fact, Mr. Microphone made your voice sound like it was coming out of a paper towel roll placed over a muffled drive-thru speaker.

The Veg-o-Matic became the inspiration for comedy bits great (early SNL's Bass-o-Matic fish blender) and awful (Gallagher's Sledge-o-Matic), as well as be totally ripped off by the Slap Chop in what should've been a landmark patent infringement case. The food dehydrator, as Ron himself says in this clip, helps stretch your dried meats budget. Because I don't know about you, but my families Beef Jerky bills are putting me in the poorhouse. These are just the right products to help you get through those cross-Atlantic voyages in an open Viking boat.

I feel like there is a healthy percentage of American basements where the remnants of these sit under two inches of dust next to old bread makers and espresso machines. An appliance graveyard they were shipped to after one or two uses. Which is about how many it took before you realized you just spent four hours trashing your kitchen to make boiled carbs you can get in a box at the supermarket for 33 cents a pound.

The Rotisserie and BBQ

According to Popeil's Wikipedia page, this little grease trap sold over eight million units in the U.S. alone, and pushed Ronco's sales over $1 billion in profits. It didn't replace the conventional oven. Or anything else. But it did add "Set it and forget it" to the lexicon. Which still beats runs hot, dripping, rotating circles around any catch phrase Peyton Manning's commercials have.

Finally, as a testament to Ron Popeil's greatness, he was nothing less than Weird Al song worthy.

RIP, player. Godspeed as you head into that great dehydrator in the sky.