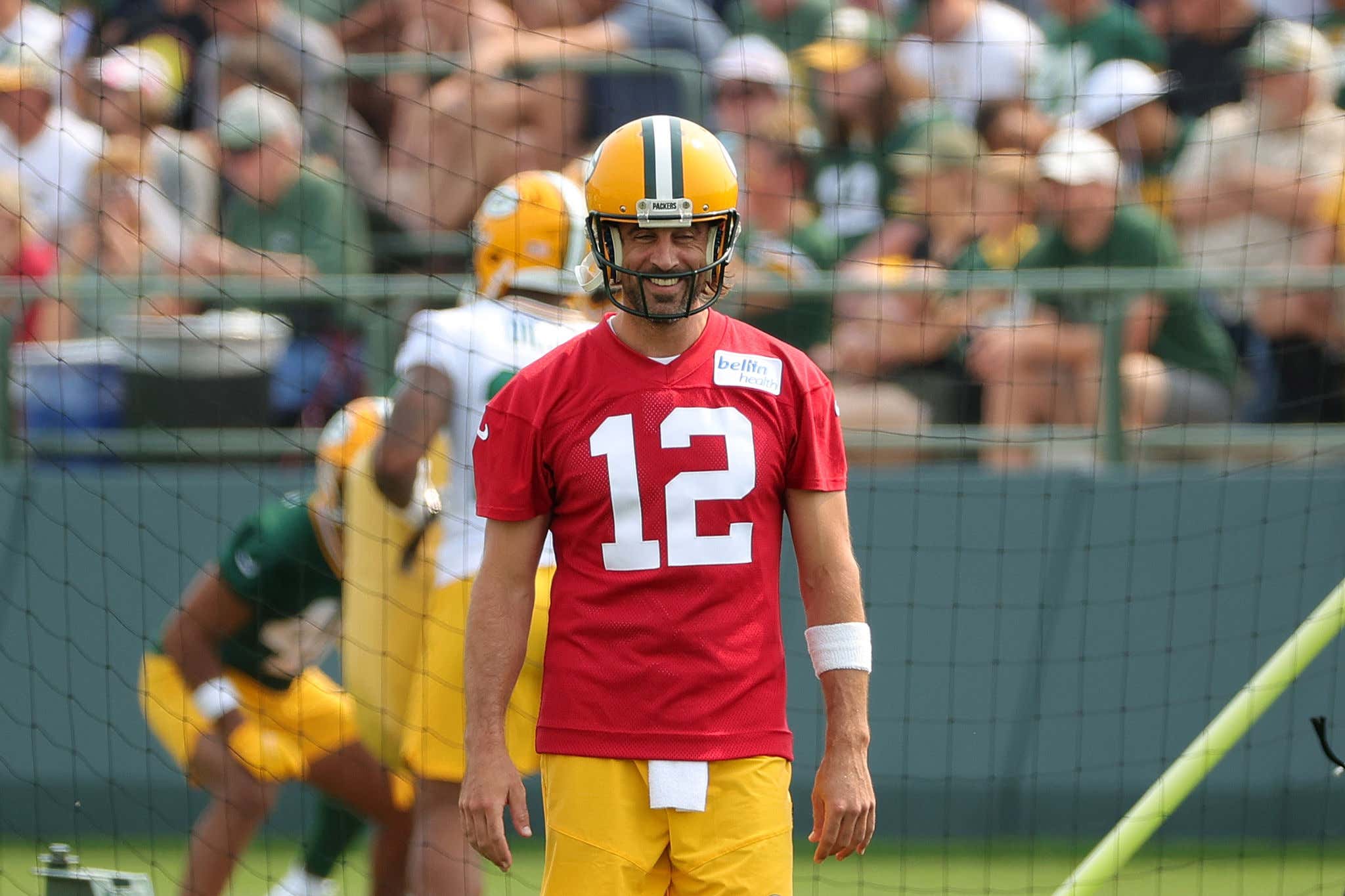 Aaron Rodgers is back practicing today as training camp gets underway with the Packers. That also means we got to hear from Aaron today after practice and boy did he hold nothing back. All of his thoughts on the offseason were presented without filter and it was refreshing. This man hates the way the Packers front office handles their business. It's what spurned this whole shit storm of an offseason. He took to the mic today and said what was on his mind. Enjoy.

Whew. In case you didn't want to watch the whole thing I'll bring up the main points….

Rodgers expressed how he wanted a long term extension when the season ended and that Green Bay did not present him with one until May, which bothered him to no end. Being a lame duck QB after an MVP season wasn't something he was fond of. Seems fair to me. He also wanted input on incoming players and offered to recruit people through his representatives. Both ideas were shot down and he decided he wanted out.

There's no question Aaron has long desired to have a seat at the table. He wants to be part of the conversations in building this roster. Favre never had that. He wanted it, but they were unwilling to give in.

I'll never understand why they don't listen to their all world QB. He literally is the team, why not let him have input on free agent acquisitions? It's nonsense to me, as it is to him.

Then there's the part about his buddies being let go in the past without a heads up. We're still on the Jake Kumerow thing where Aaron believes he was the second best WR in camp that year despite Kumerow never finding any success in the league after being released.

It's more than just Kumerow. It's guys like James Jones, his QB coach Alex Van Pelt, and Jordy. Moving on from his boys without telling him pissed him off and he wants it known.

He was asked about his GM Brian Gutekunst, who he reportedly referred to as Jerry Krause in group texts with players. Professional. Sure thing!

Yeahhhhhh no leaking of any info. Not a fucking chance. That's literally what the whole offseason was filled of.

Rodgers says he considered retirement. That I buy. I could so see this dude hanging it up and just enjoying life with his fianceè Shailene Woodley. That being said, he loves football and that's why he's back. He's under contract and had zero leverage to get moved elsewhere. He wants a second ring and Green Bay is his best chance at that right now.

But no, Rodgers is no victim. He has certainly made sure of that.

That line made me laugh a little. He did say he's been paid plenty and has been the starter here for years, but I mean this whole show and dance was an attempt to paint him a victim of the front office, no?

He was asked what happens next season and left the door open.

Listen I didn't think we'd see him back in camp on this day so anything can happen. I still wouldn't bank on him back in 2022. Unless something significant changes I'm fully expecting this to be his final year in Green Bay and they'll transition to Love next season. That's fine, give it one last shot with a great set of personnel. Hey even Randall Cobb is back! Apparently he's only 30 years old somehow. Coulda sworn he was at least 35. Cobb's return is a clear sign Rodgers' say is beginning to mean something. I do like him coming back because he's going to be the perfect mentor for Amari Rodgers in the slot. We'll see what he can deliver on the field.

Either way, that presser was fucking awesome. The honesty and openness you just don't see that. Shredded them to no end. Now it's all out there, let's have a fucking season.

I'll conclude the blog with this video because it's fantastic.