Last night I made my return to the movie theaters for the first time since last February. I really love going to the movies, and that was one of the biggest things I missed during the pandemic. There haven't been too many good movies out, but I really just wanted to be in a movie theater so I decided to go see "Pig" starring Nicolas Cage. It was way better than I thought a movie about Nicolas Cage trying to find a pig would be. I'm not into artsy movies and shit, but this was good. I recommend it.

Anyway, I actually didn't go to the movies alone last night. I went with my male roommate I went with two Norwegian supermodel twins and we made out the whole time. (They were girls btw. Hot too).

But I saw someone on Twitter trying to suggest I went to the theater by myself in a rather critical tone, and I just won't stand for that. Going to the movie theater by yourself is the best. I'd almost say it's my preferred way to go. You don't have to worry about finding someone to go, agreeing on a movie, scheduling a movie time, and seeing what theater works best. You just pick out a movie you want to see yourself and go.

And it's not like you're talking during a movie anyway. That's why it's always a terrible idea for a first or second date when you barely know a person. It shouldn't be a social event. You're just sitting in a dark room for two hours and silently watching a movie. You wouldn't feel weird about watching a movie at home by yourself. The only reason we feel the need to go with other people is because there's a stigma about doing things by yourself in public. But doing things by yourself can be great.

Now personally, I'm always a little weary of going to the movies by myself. I'm an Internet personality at a popular company so sometimes people recognize me in public a superstar celebrity and can't go anywhere without being mobbed by fans. So I do have a part of me that's afraid of people thinking like "Oh wow look at Tommy Smokes by himself at a movie. How pathetic. What a fucking loser."

And it's not only that. I would say one time where privilege doesn't exist as a white man in America is going to the movie theater by yourself. Feel like I'm getting side eyed the whole time. Hell, if they made me go through a metal detector I'd totally understand it. You also have to pick your spots. A comedy by yourself? In the clear. The Joker by yourself? Probably a no go.

But despite all of these fears and deep-seated insecurities, I did finally try it for the first time alone two years ago, and it almost backfired immediately. I went to see Spider-Man: Far From Home by myself because, well, I just really wanted to see it. I got my popcorn, soda, and candy and headed to my solo seat in the back corner of the theater. The first half of the movie was pleasant. I was loving this solo experience. But about halfway through, a couple took the open seat next to me (that they almost certainly didn't reserve ahead of time) and started whispering and kissing each other the whole time. Right next to me! Like an arm rest away! Two people in one seat! If the man wasn't intimidating looking and much larger than me, I probably would've said something. But I am a pussy.

And that's not all. I then quickly found myself in a situation that felt like I was stuck inside a Curb Your Enthusiasm episode. About halfway through the movie, I got a text from a girl I was seeing asking if I wanted to go to the movies that night.

Okay I didn't have to see Spider-Man twice in one night so that worked.

The exact movie theater I was at.

Everything was perfect and convenient for me, but I had a huge decision to make. Do I just admit it to her that I'm currently at that exact movie theater by myself watching a superhero movie while a couple makes out next to me? Or do I try to pull off an escape? At 10:45 when the movie ends, I could try to sneak out some back exit of the theater, walk around the block, and act like I've just arrived at the movie theater for the first time. "Oh hello there. Nice to see you here at this movie theater that I am at for the first time ever, and certainly for the first time tonight."

Ultimately, I decided the only thing worse than admitting to seeing a movie by yourself is getting caught trying to sneak out of the theater after seeing a movie by yourself, so I decided to just be honest, and all was fine. After that night, I went to several other movies by myself and enjoyed them all. It's a very pleasant experience. If you've been too self-conscious to try it, I urge you to sack up and just do it. You'll love it and never want to go to the movies with anyone else ever again.

This is the perfect snack combination at the movies. 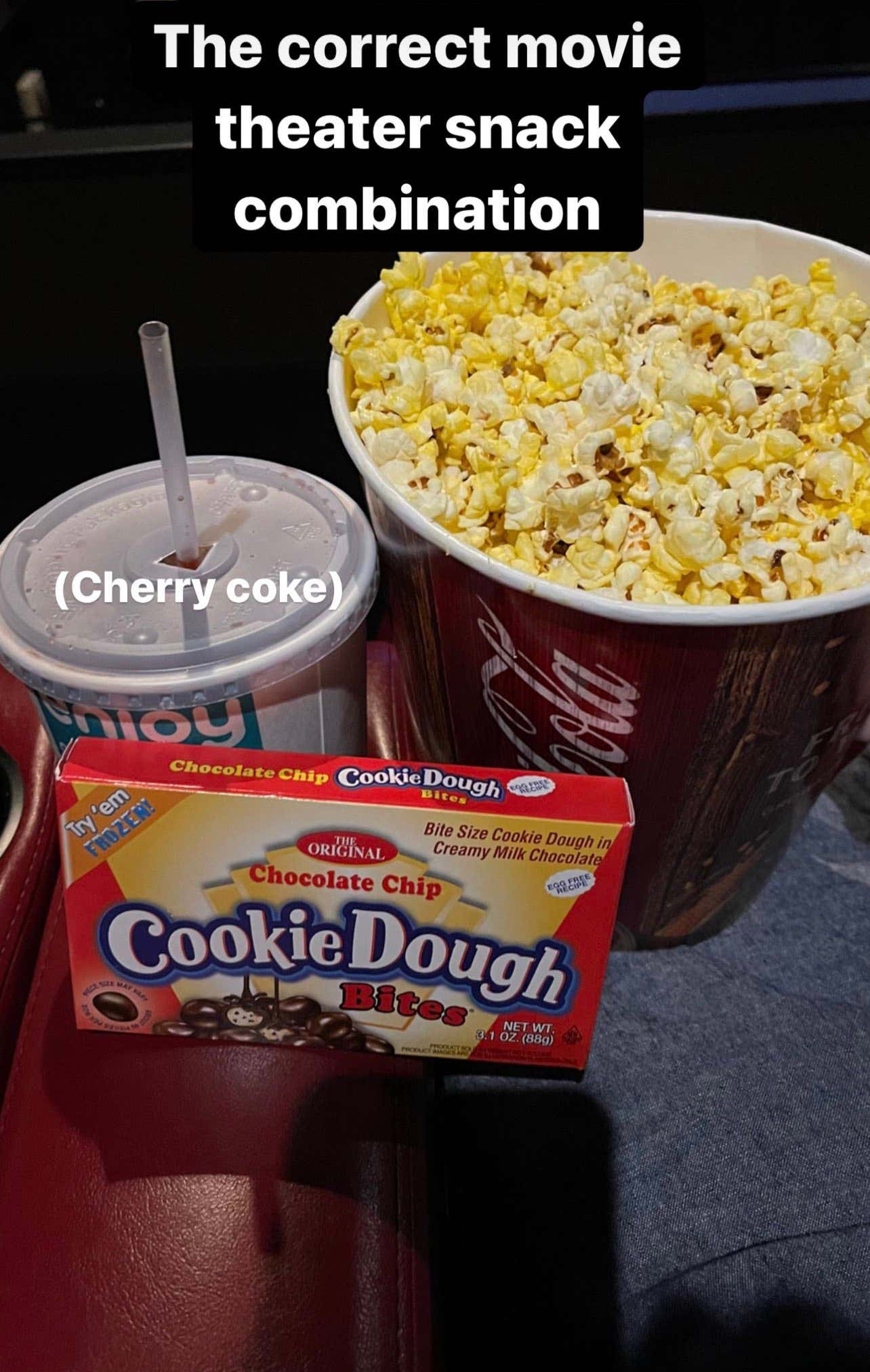 Popcorn is obviously a must. The bigger the better. Cherry coke isn't necessarily always my favorite, but for some reason, it just hits different at a movie theater and compliments popcorn well. And for a candy, I like CookieDough bites. You can mix them in the popcorn if you'd like (I don't). And they're very good on their own. Need something sweet to go with the salty popcorn. It's the perfect trio.

And you may be wondering, "Did that cost you $47?" Nope. Only 7 bucks. Went to CVS and got a 3 for $3 deal on the CookieDough Bites and snuck one in. (Hope FBI isn't reading this). The popcorn/soda combo would've been $16, but I had $10 in AMC credits (I'm an A-list member, it's whatever). So overall it was an efficient night for me.