This is the exciting conclusion and I've changed things up just a bit! For my Top 10, I've made cut-ups of each guy. So I'm not sourcing Twitter for these, I'm making em' my damn self! And I've also included a NEW segment in each video called On The Field w/ Steven Cheah that I hope you enjoy!

I've always quietly rooted for Allen, but after last season being sub-60% accuracy, you kind of thought he was what he was. Lots of talent, huge arm, good mobility with a lot of untapped potential. Then he just took all the strides you'd want a young QB to take. Not only did his decision making and mental processing get a lot better, his accuracy improved too! That's something you hardly ever see. Take a closer look here:

You know a WR is good when you are about to play them in fantasy and are absolutely terrified of how many points they'll score. Adams was a TD collector last year with 18 in 14 games. The best way to describe him is slippery yet reliable. Expect another big year with Aaron Rodgers in 2021:

Williams was unranked last year because he didn't play in 2019. After a messy medical situation gave him a lot of distrust with the Washington Football Team Organization (that's a mouthful), he was dealt to the 49ers for two mid-round picks. After an outstanding 2020 campaign where he showed almost no rust, the 49ers made him the highest paid LT in the league. See why here:

Derrick Henry is a monster. He's just enormous, crazy fast, and long. That doesn't get talked about enough. He has 33" inch arms which makes it like tackling a mix of Zangief and Dhalsim from Street Fighter.

T.J Watt had a permanent residence in opponents backfield in 2020. He led the league in both sacks (15.0) and tackles for loss (23). Take a closer look at how he is so productive:

Travis Kelce played in 15 games last year. If he played in 16, he may have led the league in receiving yardage, which is bananas for a Tight End. As it turns out, he finished just 119 yards behind Stefon Diggs and ended the season in 2nd place. I broke down how he's able to churn out such big yardage totals:

Aaron Donald won his 3rd Defensive Player of the Year award and there is no reason to think he won't win his 4th this coming season. Quarterbacks are the premium position, but Donald may be the best Defensive football player I've ever seen. Check out what makes him so special:

You could really stack the next three guys any way you want. Mahomes certainly has the highest ceiling. His Offensive Line last year was injury-ridden and this year they replenished that group hard through both the Draft and Free Agency. How quickly they'll be able to gel will be key in determine if he'll be able to nab that #1 spot next year. Breaking down his tape was certainly very fun, check it out here:

I put the reigning MVP at #2 over Mahomes because I think he'll be on an even bigger F.U. tour this year. Last year he had the Jordan Love chip on his shoulder. This year that chip has grown exponentially bigger with rumors that the Packers took calls on him on Draft day. He's getting up there in age, but he's got everything you'd look for in a Quarterback on the field. Huge arm, good mobility, pinpoint accuracy, and the ability to go through his progressions quickly. I dove deeper here:

I feel like Tom Brady had the hardest to argue case for #1. With TB12, it's not only about his skills on the field: lightning quick mental processing, remarkable accuracy, fantastic deep ball, way better than advertised pocket mobility. But it's more about his aura. Guys on the Bucs have spoken about the never waivering faith they have that he can get them out of a bad situation and Brady proved time after time, especially in the clutch that he was as advertised. With the Bucs hoping to repeat, I wouldn't be surprised to put him at #1 again next year. 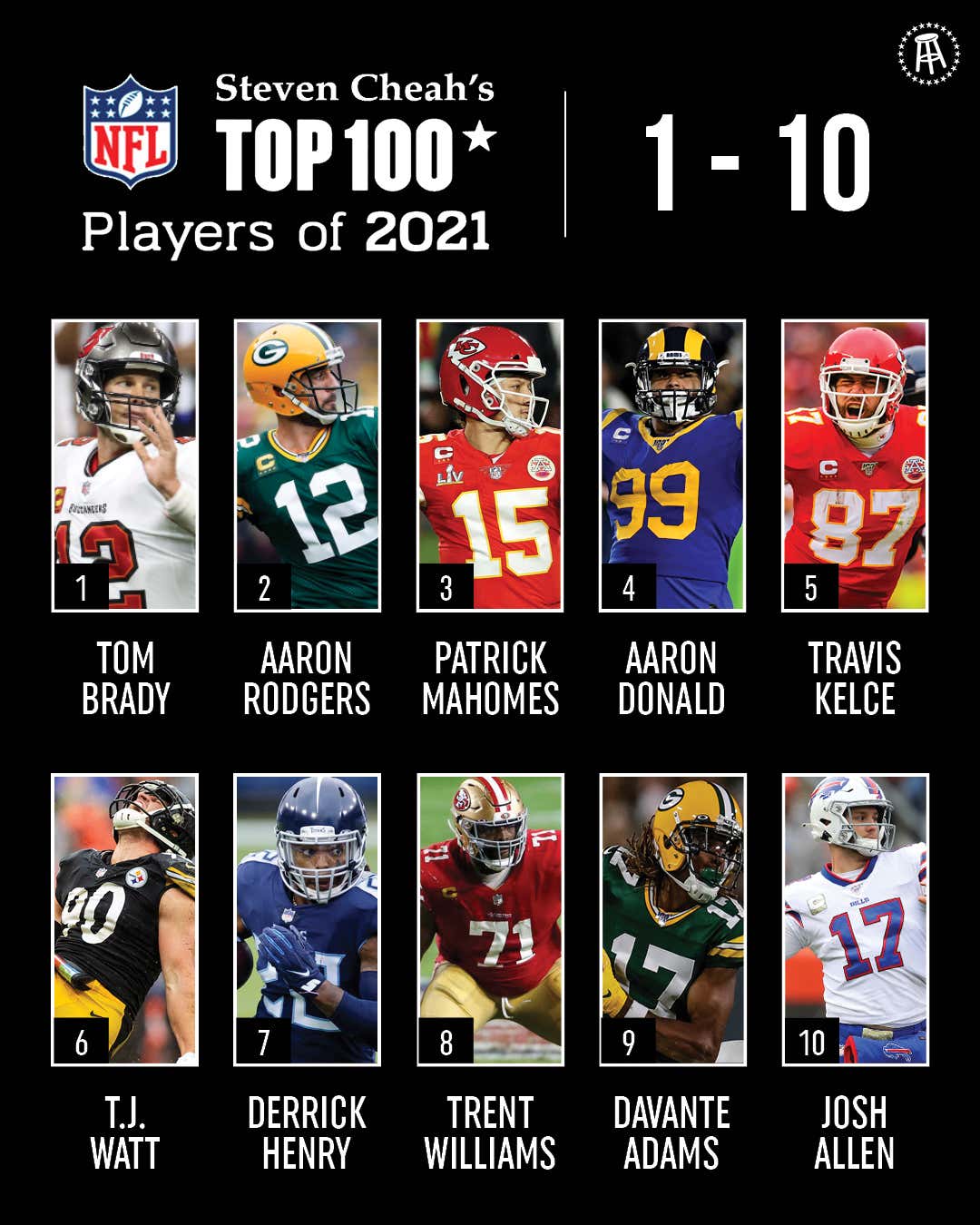 Thank you to everybody that followed along with this list and interacted on social. And special shoutout to my guy Richie Weber who did an awesome job with all these graphics and helped take these rankings up a notch.