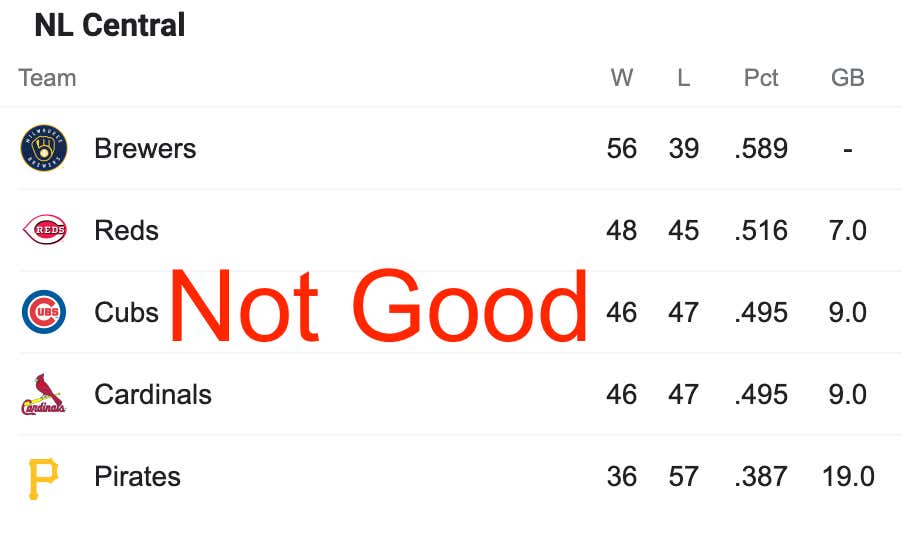 It's safe to say that historically speaking, I've had no problem being a sucker. So why start now? I've decided to open my heart and close my brain by giving the 2021 Cubs one more chance to steal my heart. I don't have another choice. There's way too much baseball left.

And that's knowing coldly that KB is about to be playing for another team. Whatever. Let's just win 9 of the next 10 and worry about that part later. For now he's still on the team and tonight we play the Cardinals, an equally underachieving club with thin starting pitching that's also waiting for the superstars to take over. At 46-47 each, you imagine this is legitimately a make or break series for both clubs. 46-50 one way and 49-47 the other looks a lot different. Why can't the Cubs get hot?

I'll answer that. The pitching staff has regressed to uniform mediocrity after carrying an inconsistent lineup the first 25% of the season. That's started to slow and the offense hasn't caught up. 10th in runs. 9th in OPS. 13th in on base. Absolutely brutal for that kind of lineup, and it's actually gotten worse over the last month. So that's plenty of good reason to assume this squad is going nowhere.

At the same time, the Cubs have been alarmingly good in their Wins in the first half+ which sounds self-explanatory but stay with me. When the Cubs win win, they roll. They outperform everyone in the NL central offensively in games-won and to be fair, they're not shitty offensively compared to their peers in Losses. This gives me a ton of faith the lineup can get flaming hot. So really, it sincerely just comes down to the starting pitching getting hot. That sounds impossible but here's why it's not.

There's 13 very winnable games over the rest of the month. I would hope that the Cubs are in the same camp as me and praying to everything that is sacred and holy that they win 11 or 12 of those games. Please. Because somewhere deep inside me I will always be the hopeless baseball fan that things the Cubs can make a decent 2nd half run. Not for nothing, Joe Maddon made that an obvious and consistent reality during his stretch. No reason to think we can't run back some of that magic one more time.

I've seen crazier things happen. Basically every baseball season I can remember has some outlandish 2nd half run that captures the hearts and minds of baseball fans everywhere. Consider this my public appeal to the baseball gods that they select the Chicago Cubs to be 2021's team of destiny. We're about 6 weeks away from Illinois starting their improbable run at a Big Ten championship and it would be great if the Cubs could bridge that gap with a 20-game push in the win column.

In the meantime, take advantage of what I'm calling the sharpest exclusive ever offered on the Barstool Sportsbook