Jimmy Ivan Jennings, 26, was stuck in standstill traffic with some friends for over two hours due to a multi-car collision, when he decided to jump off the Atchafalaya Basin Bridge as a joke to kill some time.

“We were bored inside the truck. ... I looked down (at the water), and it didn’t seem too far,” Jennings told the NY Daily News. “As soon as my fingertips came off that side, I was like, ‘Oh my god, this was the stupidest idea.’”

Instead of being able to quickly swim to shore and walk back up to the car as he planned, Jennings injured himself and quickly got caught in the current.

In an interview following his rescue he went on to detail the several-hours long ordeal including:

- Finally getting to shore, discovering an ATV & trying to ride it to seek help only to realize he was on an island

“It was crazy to do what I did,” Jennings said, adding, “I don’t even want to swim anymore.”

Here's the full video of the jump that ruined swimming for the lad:

The way he begins to flail lets you know right away he knows he's made a mistake, and the slap when he hits the water… you feel it a little. Thankfully Louisiana men are just built different (shoutout Mintzy who would have also absolutely survived the fall): 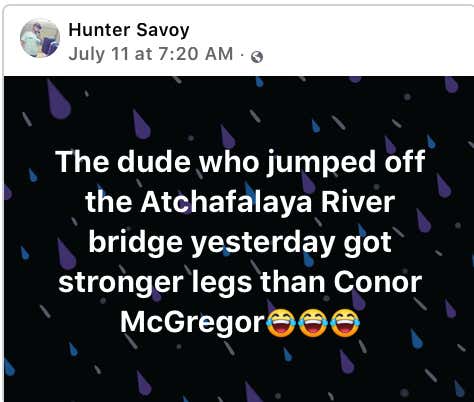 According to family lore, one of my uncle's buddies jumped off the Townsends Inlet Bridge connecting Sea Isle City to Avalon in South Jersey back in the day as a goof because he didn't have the toll money, which was probably a nickel at the time. (Am guessing beer was also involved.) When I was a kid this sounded like a wild, death defying feat but looking at the bridge now & comparing it to Jennings' leap it was probably just refreshing… Either way a hard pass from me.