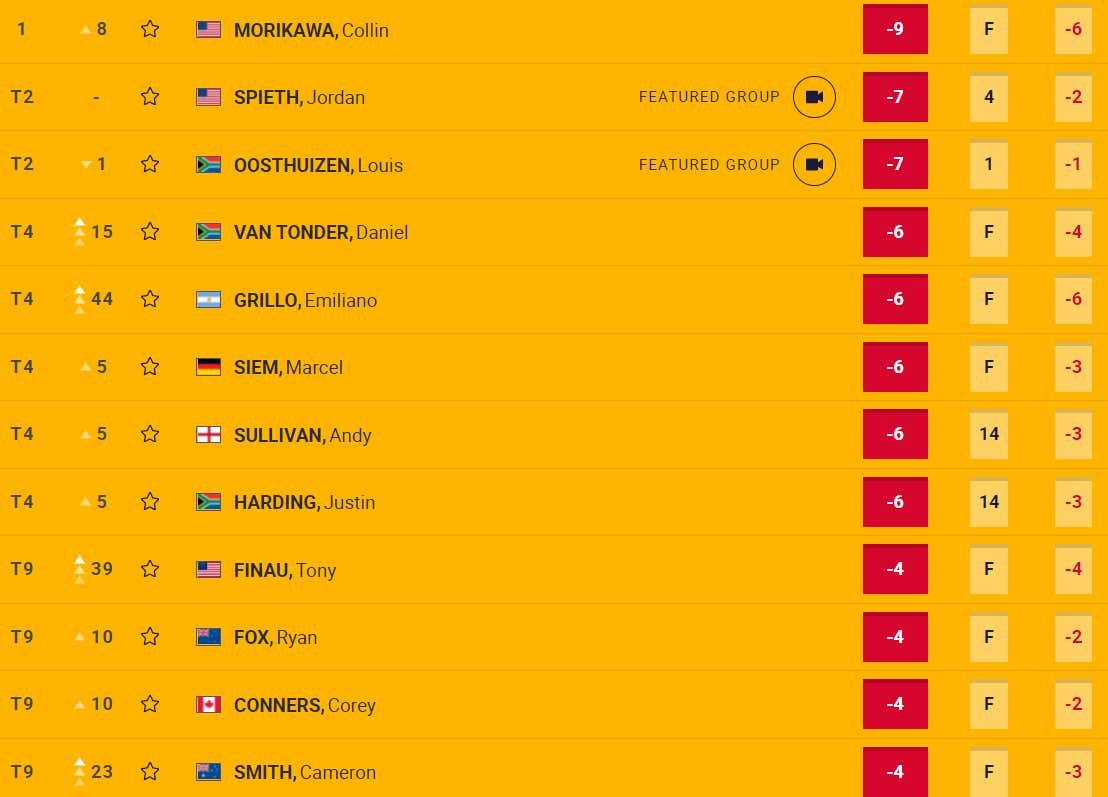 (leaderboard and betting board as of 10:30 AM ET on Friday. Download the Barstool Sportsbook app TODAY)

Hot start for the morning wave today. Wind continued to be down, much like it was for yesterday's morning crew. There can be a lot of luck involved with tee times at Open Championships because of the weather, but it looks a lot like it's going to play out pretty fair and even for the field this week. I'd say that's a good thing.

Ton to get to, so let's roll, starting with the obvious…

Kawa came out firing from the jump today and never looked back. He's capable of going low in any given round if his putter is just decent enough because his approach game is far and away the best in the game. But today his putter was en FUEGO. The guy couldn't miss inside 15 feet for most of his round. Collin had started to employ an arm-lock method on the greens earlier this year. After really not making anything last week at the Scottish Open, he ditched it this week to go back to a more traditional grip. The results speak for themselves.

It's stunning that this is Collin's first Open. It feels like the guy has been a factor and a big name on Tour for years now, which says a lot about the type of player that he is. But this is also a tournament whose identity is experience and ingenuity. Rarely does a young player just show up and play 4 rounds of great links golf. Collin himself said going into the week that there are still plenty of types of shots that he needs to learn how to hit to win a tournament like this one. It was almost as if he didn't expect to be in the mix, but rather use this week as a learning experience to contend at future Opens. Now he's got a commanding lead midway thru day 2 and feels poised to run away with it. I'm pulling for the guy because he's easy to root for.

Holy bogeys and birdies. Absolute roller coaster of a round, with a strong -5 finish in the last 7 holes. He even almost holed out on 18 on his approach to hit that legendary 63 number in a major championship.

For the more casual sports fan, Emiliano Grillo is a Tour veteran who has just kinda hung around for a while. He's 28 years old, and I think there was some promise early in his career that he was going to become a star, but hasn't really broken through in anything notable. Ball-striking is his forte, and he put on a clinic on the back 9 today. He's never contended in a major (0 top 10's in 18 tries), so we'll see if he can stick.

If there were to be a journeyman utility infielder in golf, Marcel Siem would be it. 41 year old has been around forever and has done nothing all that remarkable besides just hang around for a couple decades. Quite frankly, this might be who Grillo ultimately becomes in a decade or so. But Siem is a big personality and he's lovin every second of the limelight this week. Don't see many man-buns out on Tour these days either. Fun stuff.

DVT was out in the 2nd group this morning at 1:46 AM ET. Even most who got up early to watch the Open missed most, if not all of his round. He's the 87th ranked player in the world and has spent most of his career on the Sunshine Tour down in South Africa. Guy won 4 out of 6 events after the COVID break on that Tour and started making some starts over on the European Tour just a few months ago. He won the Kenya Savannah Classic (who could forget it) in March and that qualified him for his major championship debut at the PGA at Kiawah. Now he's in the mix thru 2 days at The Open. Doubt he sticks, but South Africans tend to play well in links-style conditions. We'll see.

Tyrell Hatton Is On One, Yet Again

As I blogged about here. (plz give me pageviews)

The Cut Sweat Is On

As I type this out, the cut is at +1 with 78 players making thru. Earlier this morning it was +1 with around 88 players inside the cut. That suggests that the cut line is trending more towards moving backwards to +2 rather than forwards to even. With wind potentially picking up and conditions drying out a bit, I expect that to happen by day's end. But it's gonna be close and something to keep an eye on for sure. Right now there are big names like Rahm, DeChambeau, Westwood and my guy Big Jon Thomson on the right side of the line at +1 and other names like Molinari, Hatton, Leishman, and Stenson sweating in the clubhouse at +2 with matters out of their hands. Should make for great drama.

Let's see if Spieth, Oosty, and others can close the gap on Morikawa. Jordan is already off and running with birdie at 1.

Enjoy the rest of Day 2 of the Open Championship.

Hey while I have ya here… one of the best things about the Open Championship is that us Americans get to wake up early, watch golf in the morning and early afternoon, and still have time to get out there on the course and play a round ourselves. I'm playing a couple twilight rounds out in Ocean City, MD this weekend and there's no way I'm booking my rounds with anything other than the Barstool Golftime app. Do yourself (and me, if you want more blogs from yours truly this is a great way to support me) a favor and download that TODAY. Best tee times available and an absurd amount of courses and you pile up great rewards along the way. Do it.