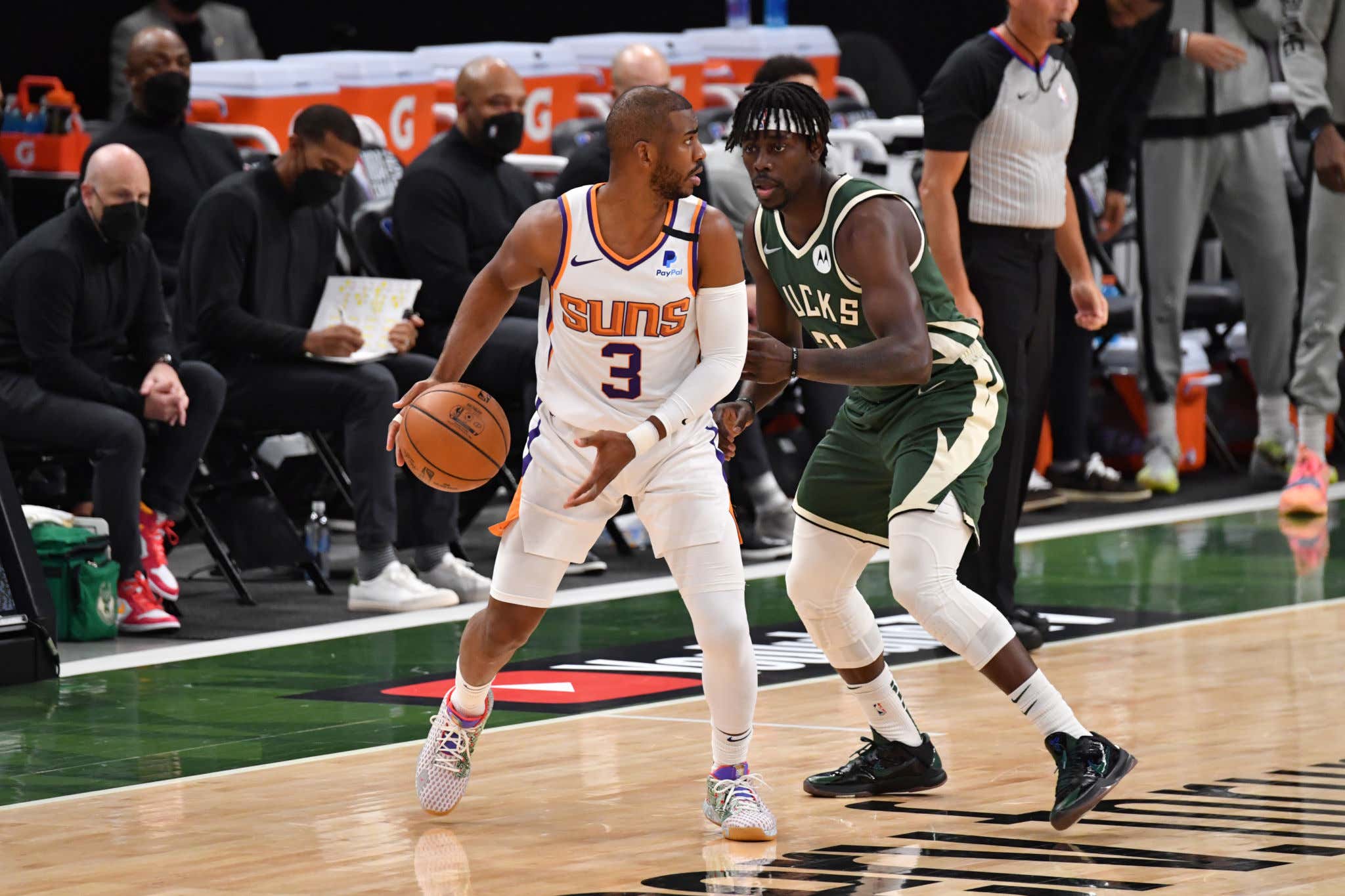 It's crazy how quickly a series can change for a player. When these Finals started, it looked like Chris Paul was finally on his way to his first ever title. He was playing at such a high level through two games (27.5/4.0/8.5 on 56/58% splits) that you had every reasons as a Suns fan to be over the moon. His midrange was working, he was closing out games by himself, everything you think of when talking about the Point God was present to start the NBA Finals.

But as we know, the NBA Finals are not 2 games long. Now, ask any Suns fan if they are nervous about Chris Paul and I don't know how they could say no. Coming off a brutal Game 4 (10/4/7 with 5 TOs on 5-13 shooting), maybe you want to point to his potentially fucked up hand. I'm sure that's a factor on some level, but for me the real reason is what Jrue Holiday is currently doing on the defensive end. He's picking up Paul basically at 94 feet and has made his life a living hell. There's a reason essentially every NBA star says that Holiday is the toughest on ball defender in the league. I thought it was really interesting to hear Holiday talk about defending Paul after last night's huge win

The numbers are pretty staggering when you dig a little deeper. It's one of those situations where the stats also back up what your eyes are seeing.

So far in these NBA Finals, Jrue Holiday has been the primary defender on Paul for a total of 78 possessions. He's forced Paul into 7 TOs which might not seem like a ton but is actually pretty impressive considering Chris Paul went nearly the entire playoffs without turning the ball over. Look at these numbers!

Things are entirely different when you go from the Facundo Campazzo's of the world to the Jrue Holiday's. When the Suns don't turn the ball over, they are nearly impossible to beat. It's no coincidence thought that last night, a game in which they had 17 TOs leading to 24 Bucks points, (Paul had 5 TOs), that the Suns ultimately lost.

So far in these playoffs, Jrue Holiday ranks in the 89th percentile in guarding the P&R ball handler while holding them to just 41% shooting. Players score on Holiday just 37% of the time in that set. That's huge considering P&R is one of Paul's greatest strengths. If I were a Suns fan, I wouldn't be too concerned about the CP3 shooting. That'll come back around, especially once they go back to PHX. The concern though is the fact that he has 15 TOs in the last 3 games. The concern should be that the Bucks seem to have found a way to make his life tougher, and perhaps that is impacting his legs/ability to shoot the basketball down the stretch of these games. Paul is shooting just 38/28% in the fourth quarter of these NBA Finals and that doesn't feel like an accident.

The reason you're nervous as a Suns fan is mostly due to Paul's playoff history. It's only natural. The Bucks appear to have found a formula for limiting his production and forcing him into the type of mistakes he hasn't really made during this entire Suns playoff run. He hasn't really looked this bad since he was dealing with his shoulder injury against the Lakers, but since Game 1 vs DEN in the beginning of June he's been lights out.

As we know, the Suns go as Chris Paul goes. Even with Devin Booker looking more and more unstoppable as the series goes on, Chris Paul is the head of the snake. You eliminate him, that's your path to an NBA championship. Now it's on Monty Williams to figure out a way to help his Hall Of Fame point guard. They have to find ways to get Chris Paul out of the jail that Jrue Holiday currently has him in. If they don't, he might never actually win that elusive ring.