These exclusive fries are made from Chipperbeck potatoes blanched in Dom Perignon Champagne and J. LeBlanc French Champagne Ardenne Vinegar. The fries are then cooked three times with pure goose fat from cage-free geese raised in Southwest France.

The process to create these elevated fries does not stop there. The fries are then seasoned with Guerande Truffle Salt which is hand-harvested from Guerande, France, and then the fries are tossed in Urbani Summer Truffle Oil. They are topped with shaved Crete Senesi Pecorino Tartufello made of milk from sheep that are grazed on the clay-rich hills of Crete Senesi and then black truffles foraged from valleys and forests in Volterra and Miniato, Italy are added. The fries are also topped with shaved Black Summer Truffles from Umbria, Italy.

The presentation is also quite the spectacle as the fries come on a Baccarat crystal Arabesque plate and bowl — and are sprinkled with 23K edible gold dust.

First off, I'm not calling the folks at Serendipity 3 liars, but show your work guys.

Are we just supposed to take your word for it that the truffled pecorino comes from "milk from sheep that are grazed on the clay-rich hills of Crete Senesi and then black truffles foraged from valleys and forests in Volterra and Miniato"?

I was born at night, but not last night.

I know how hard it is to get Wisconsin cheese right now, with collapsed supply chains, and I live right next door. I cannot begin to imagine the heroes quest farmers of this cheese would have to go on to get this stuff to your joint in NYC.

Instead of your two hotshot culinary mad scientists posing for the PR pics for this monstrosity's announcement, lets get the poor schlubs sourcing this stuff.

Secondly, you couldn't have done a better job presentation-wise?

When I dream of french fries, here's what pops into my head. 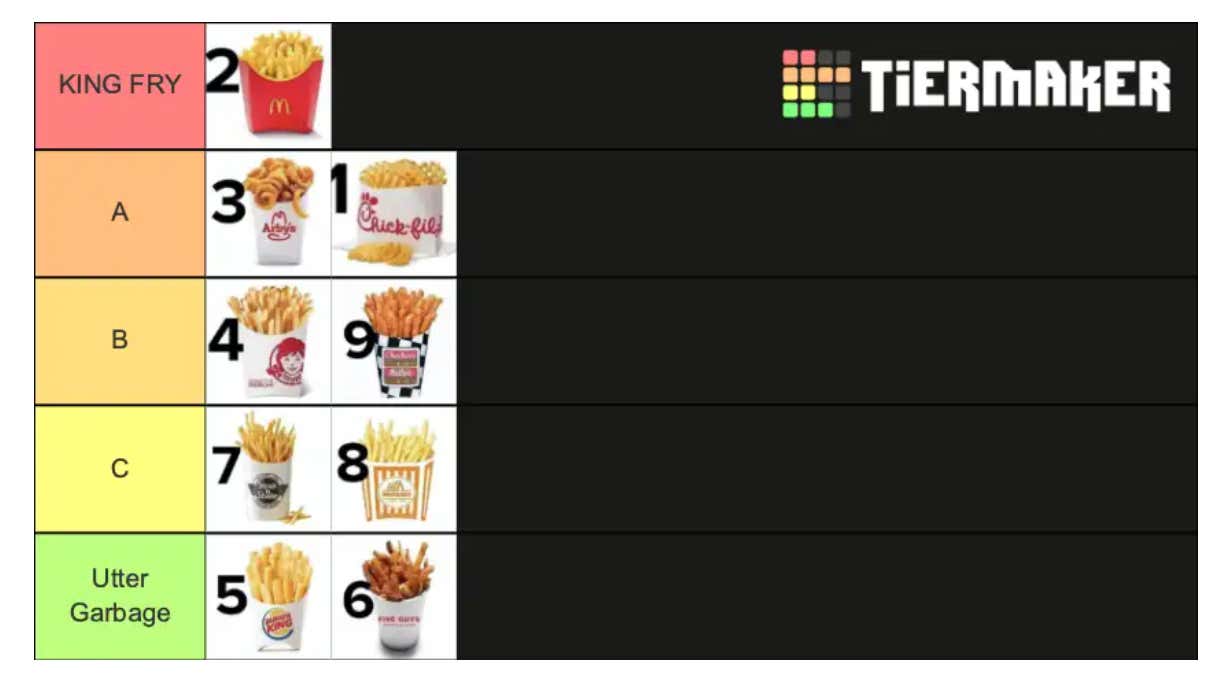 In that order. Sub in Portillos for Rally's and we're buono.

I'm not trying to get some plate that looks like Peter North just finished all over them.

Also, nobody wants to dip these things in your fancy mornay sauce. Give us ketchup. This is America.  That Swiss raclette is fucking $25 a lb right now. Stop being such try-hards and hit us with some Sir Kensington's or Simply Heinz.

And last but not least, cool it with the edible gold leaf horse shit. It doesn't affect the flavor, it just boosts the price tag. You could lay entire leaves of the stuff on the plate rather than flake it and make it $5k French Fries.

This plate looks like what is in that styrofoam container in your fridge from last weekend that you forgot about. You pop it open and low and behold, it's loaded fries from Fado that had a turbulent Uber ride home last weekend before sitting on the bottom shelf of your Kenmore.

The restaurant is home to the Golden Opulence Sundae, a dessert that has to be ordered 48 hours ahead of time. According to CNBC, the treat, “Comes complete with three scoops of Tahitian vanilla ice cream covered in 23-karat gold leaf, as well as almonds, caviar, and a sugar-forged orchid that takes eight hours to build. The dish is served in a $350 Baccarat crystal goblet (lined with more than 23-karat gold leaf), with an 18-karat gold spoon on the side.”

In closing, if I'm high on life and looking to drop $200 on a single menu item, I'm heading to Mastro's or Chicago Cut and ordering one of those A5, 50 year old dry aged ribeyes that antagonize you on the menu every time you go there. Not this monstrosity.

p.s. - the Frrrozen Hot Chocolate goes hard. If you know you know.