Let me set the record straight for the hundredth time: I don't tier for fun. Tiering, to me, is an honest day's work. There are people around the globe constantly searching for answers to myriad questions. It's a confusing time to be alive. Guidance one can truly trust is at a premium. And like our pal Lady Gooch here said, this is ultimately for science. There are humans living among us right now unaware of how good fries are at certain establishments and are hiding in the shadows of society thinking trash is acceptable. Thankfully, that cloud of uncertainty dissipates today.

(Also, I don't want to hear about why such and such restaurant didn't make the cut for this tier. Please don't email me, "What about Snmarkos in Poughkeepsie? They've got the best fried potatoes ever!" I don't care. The cosmos decided these were the worthy nine in need of tiering and as such all that will be tiered today. You're welcome and God bless.) 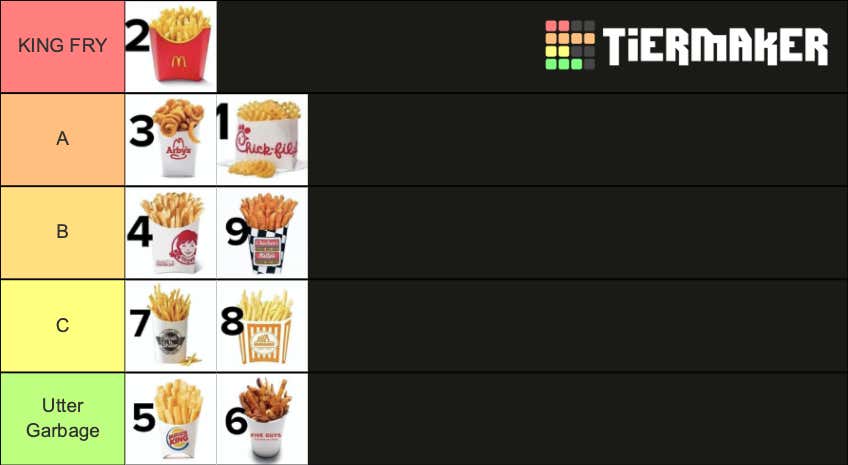 Not up for debate. Well, none of these tiers are ever up for debate. You can't debate facts with nonsense. But especially here, today, in this tier? If you don't have the Golden Arches atop your fry rankings congratulations on being an asshole. McDonalds as a whole doesn't get enough respect and I don't understand it. It's like trying to say Michael Jordan is just ok. McDonalds is the best fast food chain in the game and the numbers back that up. You want a burger? They got you. Chicken? No problem. "Milk" Shake? Be out in five. And the fries are the glue which hold the entire operation together. Well, that and the elaborate property-buying scheme McDonalds really makes its mint on. But for the food these fries are an American icon. It would be disrespectful to have them share a tier with anyone else. "Yeah but Coley they're no good if you let them get cold!" What are you, 4? Who the fuck lets them get cold? They should be gone by the time you're pulling out of the parking lot. That's a you problem not a them problem.

I don't know what Arby's did to people to make them so hated. I'd catch less heat online for murdering a man than I would if I posted a picture at Arby's. Arby's has always been good money to me. Some of the best commercials and condiments in the game and it's been that way for some time now. And the curly fries? Buddy. You'll never catch me turning down an Arby's curly fry. Not today, not ever.

And if anything this tier just goes to show that innovation and individualism goes a long way. These are two companies who knew they couldn't take on the King so they didn't even try. I respect that and they get rewarded for using their brains. Chick-fil-A waffle fries are a 9.5/10 on the fry scale. I know there will be a lot of clamoring and campaigning to bump them up to the King tier but there's literally never been two Kings. Kings are like quarterbacks. You get two in the film room and all of a sudden you've got nothing. Chick-fil-A waffle fries are a strong representative of the A Tier and would make a fine king one day if McDonalds somehow disappeared from the face of the Earth. Plus most of the time they end up giving you a full fried potato in your carton of waffle fries which is always a nice treat.

Wendy's perception is a complete 180 of that from Arby's and it's something about society I will never understand. Wendy's is fine. It's FINE. Middle of the pack. Their best attribute is that they don't fuck up the easy shit. They're a consistent number three starter who have a 15-year career in the Bigs. Never the ace, maybe snuck into a couple All Star Games but probably a fringe Hall of Famer at best. And as such their fries are just ok. Standard fry, not much fanfare or pizzazz. Gets the job done. Which is how I'd also describe Checkers/Rallys: they're fine. Just a sturdy, all American french fry. Not much to write home about but you're not complaining, either.

I'm not even going to talk about Steak & Shake because I know the entire state of Texas is considering seceding again because of this ranking. Whataburger is cool. You'll never complain about the drinks at Whataburger. You could break someone's neck with a timely attack using one of their burgers. The Burger is, in fact, good. The fries? What are we even doing here, Texas? Big bad Texas and their tiny, toothpick fries. Get real. What a joke. The Cowboys will not win a Super Bowl until this problem is fixed.

We'll get to Five Guys in a minute. I want to talk about Burger King for a second. Burger King had it. They fucking had it. They had their fries figured out to start this millennium. They had the spicy chicken sandwich and a quality, hearty fry. Pair those with a Rodeo Burger, some Chicken Fries, and a Simpsons Movie promotional watch and you've got good eats, friend. And, inexplicably, The King went rogue. Burger King fries used to be such a treat because they were able to provide a curveball McDonalds never saw coming. McDonalds has the glorious "bag fry" we've all come to know and love. It's a staple to the fry eating experience at McDonalds. No matter what you were guaranteed at least one bonus fry somehow longer than the straw you were given for your Orange Hi-C. Burger King could never match that head-to-head so where did they pivot? Bonus ONION RING. Good Lord. You never fully wanted to commit to an entire order of rings but that inexplicable free onion ring sample? Glorious. They had the recipe and blew it which is why they now sit in the basement. I have hopes they can get back to their roots but who knows, it may be too far gone at this point.

Burger King shares this basement with Five Guys. If you're one of these "Five Guys freaks" I see on the message boards: eat my shorts, bro. Your whole crew is wack. Five Guys doesn't even like their own fries. That's why they give you so goddamn many. A true Five Guys diner doesn't even consider the fries once they step to the register. You'd be lucky to get out of the building with a bag of fries as it disintegrates from the grease overload with every step you take. Five Guys might as well not even use potatoes since the taste is so indistinguishable due to the amount of hot oil in every square centimeter. Just use old, stale buns you were planning on throwing out and save yourself a couple hundred thousand annually. No one would ever know a change had even been made.