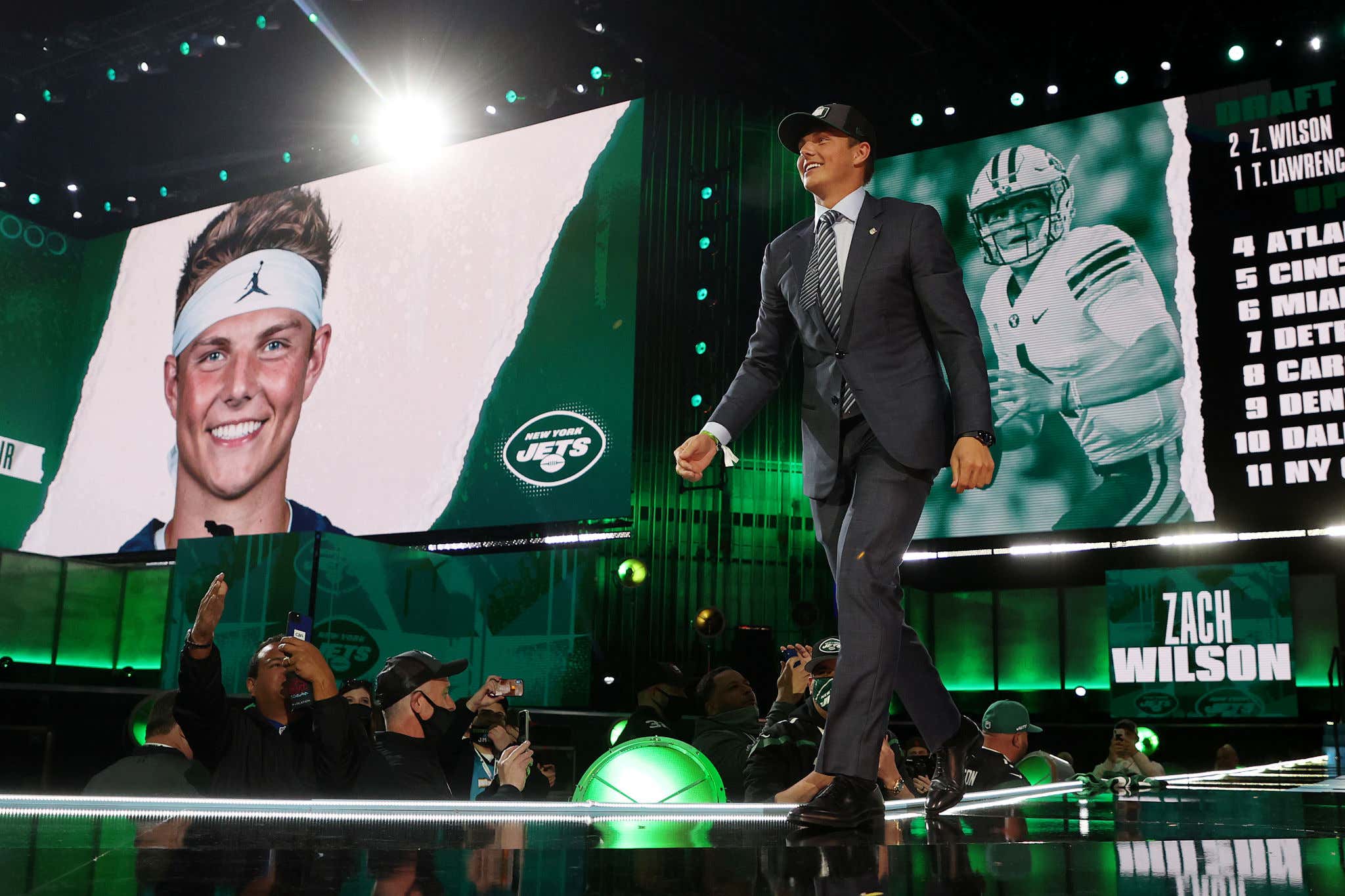 I can't remember the last time the Jets had a quarterback that didn't I didn't find fascinating to some extent. The way ornithologists are into certain bird species or bibliophiles love adding some rare novel to their book collection or gear heads are partial to a particular classic car, Jets QBs are just my thing. I never get tired of finding a new one to dive into. And rarely do they ever fail to deliver.

Mark Sanchez with the ButtFumble. Geno Smith getting beaten up in his own locker room by a teammate. Sam Darnold seeing ghosts. The ridiculous one season of Brett Favre and his inability to keep the Li'l Gunslinger in his Relaxed Fit [tm] Levi's. It's always a treasure trove of blogworthiness from this one position on this one team.

And so far, even though camp is still weeks away, Zach Wilson is already living up to the proud legacy he has inherited. First, in the form of his mom Lisa:

… the overnight sensation who took the internet by storm:

And now we peel back the layers of Zach's proverbial onion to find out that his uncle - Lisa's brother - is one of the world's foremost airline moguls.

David Neeleman is not only one of the founders of JetBlue, but Chairman of Azul Brazilian Airlines and currently working on starting up a new US carrier, Breeze Airways. 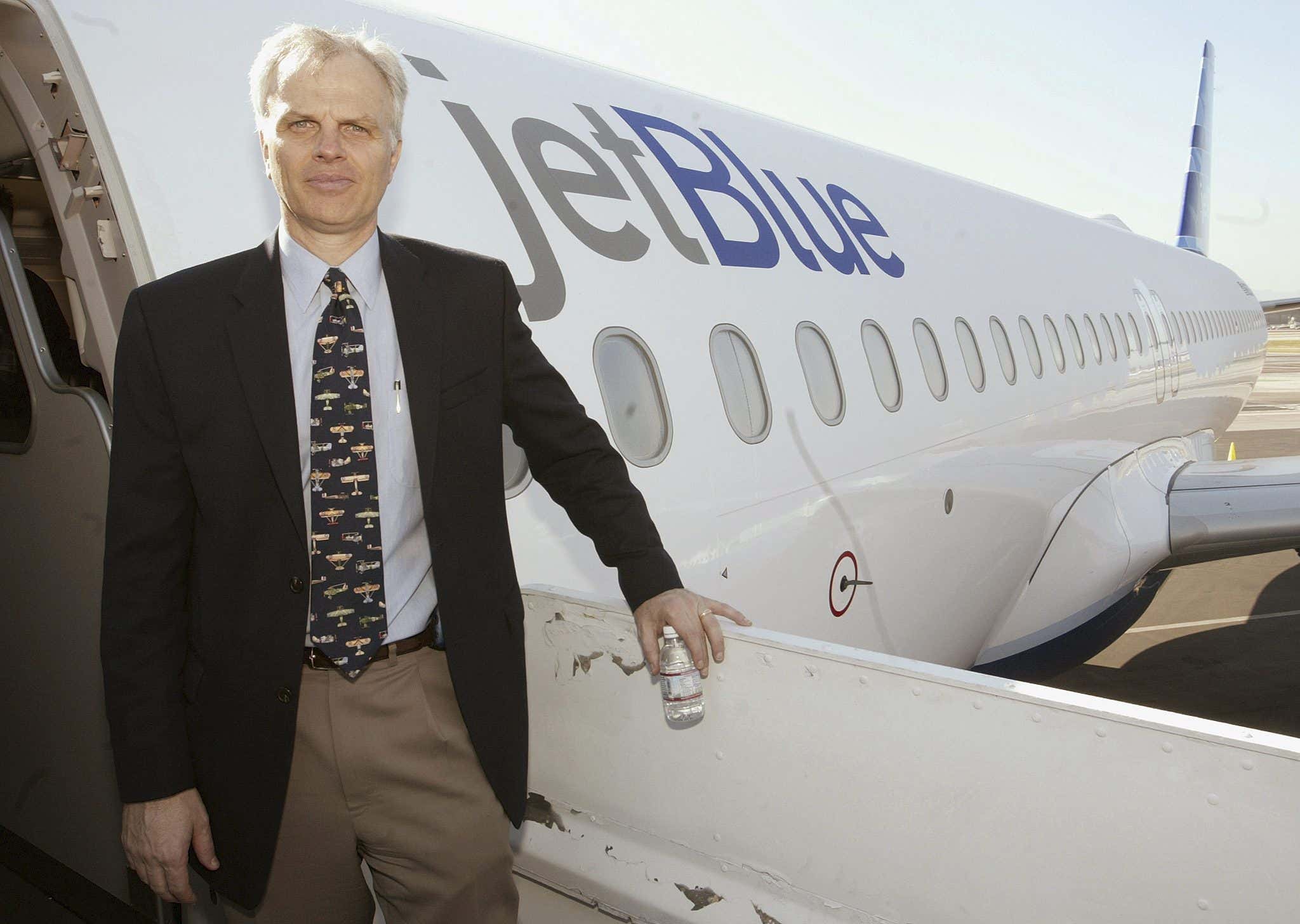 And according to the kinds of sites that measure rich people's financial dicks, he's worth $400 million.

Needless to say, Neeleman is a huge fan of his nephew. And wants fans who share his excitement to come join him on a charter flight to watch Wilson make his NFL debut at Carolina on September 12th. For a price:

Jets Wire -  Neeleman first wants to see the BYU-Utah game on Saturday, Sept. 11. Another one of his nephews, BYU LB Josh Wilson, is playing in that game. Then, the Jets-Panthers game on Sunday will be Zach Wilson’s first NFL game.

Neeleman had difficulty finding a way to get to Charlotte in time for Wilson’s Jets debut. So after looking endlessly for flights that would allow him to see both of his nephews play, Neeleman thought of something outside the box to get him to both games.

Neeleman is chartering or renting a 200-person JetBlue A320 plane. …

Neeleman is calling the event “Wilson Weekend.” Along with the flight to Charlotte, fans will get a private bus that will take them to and from the airport to the Sheraton Charlotte Hotel. Fans will also get a flight back to Salt Lake City following the Jets-Panthers game.

There are multiple packages that fans can pick from. Choices range from one to four people, which costs between $599 and $799. The packages include everything mentioned above but not tickets to both games or transportation to and from Salt Lake International Airport.

“Understanding the impact that Zach has had on BYU and the state as a whole, chartering a smaller jet wouldn’t do,” reads a blurb on the Wilson Weekend website. “For this reason, he is chartering an entire 200-passenger JetBlue A320 so that this once-in-a-lifetime weekend could be shared with many more.”

So to review: Get yourself to the airport at Salt Lake. Uncle David will fly you to Charlotte, bus you to the Sheraton where you get a one-night stay, then fly you back to SLC, and you get yourself home. As far as seeing BYU-Utah or Jets-Panthers, you're on your own. All for the low, low price of between 600 and 800 bucks.

Let's see. Call it an average of $700, times 200 passengers that's a total of $140,000. Which is less than Neeleman made in dividends and interest in the time it took me to do that math on my calculator and type these two sentences. And to repeat, Uncle David is the founder of JetBlue. Which I don't presume means he's entitled to free use of A320s any time he feels like taking in a game. It's not like Ray Kroc asking for a Quarter Pounder on the house. But you have to assume he's getting  the employee rate on this one. Meaning he's making a massive profit on this deal.

But hey, more power to him. Some rich guys who control jumbo jets use them for charitable causes, some use them as ways to fleece naive poors into paying for trips they could easily book for themselves in a couple of minutes. For cheaper. And with an actual ticket to an actual football game. You don't make $400 million without learning how to separate suckers from their money, I guess.

Lord help me, I already love having Zach Wilson in New York. This is going to be great.