A couple weeks ago, I made a joke about Daredevil in the 119th volume of Tommy's Thursday Thoughts. I didn't think much of it at the time, but eventually it would lead to a firestorm of hate from the superhero community. It's a war I never saw coming, and a war with no end in sight. I've gotten everything from "How about you actually pick up a comic, loser" to borderline cancellation attempts saying I'm insensitive to marginalized communities. Again, keep in mind this stemmed from a 26 second video about a superhero. Here is the full story of a war for the history books.

This was what I wrote in my blog two weeks ago:

"I think that of all the superheroes, Daredevil has to be the least effective, and it’s not even because he’s blind. But it’s because he only operates in Hell’s Kitchen. Like even Batman protects a whole city. Superman the whole world. The Avengers the whole universe. But Daredevil is just one blind dude covering like a 9 block radius on the west side of Manhattan. Even if you're in trouble in the East Village, that's out of his jurisdiction."

A simple enough joke. A lot of people like to mock Daredevil because he's blind. But I didn't go that route. It's too easy. I instead just poked fun at the fact that in every Daredevil movie, show, or comic, it's made a very big deal that he protects Hell's Kitchen. For anyone not from New York, Hell's Kitchen is a relatively small part of the city. Here's a rough outline from Wikipedia. 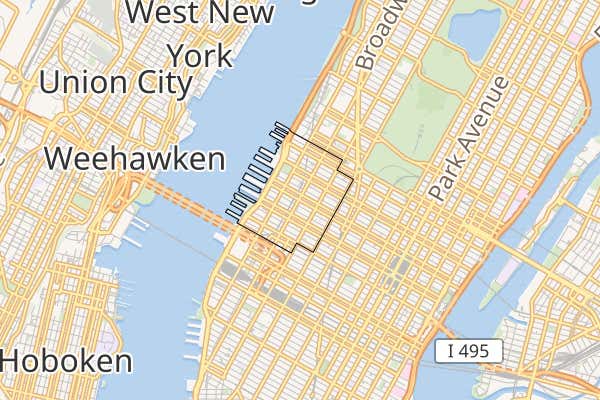 It's just funny to think about someone getting robbed 20 blocks south in West Village, and Daredevil being like "Sorry, that's out of my range. Best of luck though." How would he even get down there? He can't fly. He can't drive (due to the blindness). You can't really get on a subway in a Daredevil outfit, although I suppose there are weirder things happening on NYC subways. Get an Uber? Prices are inflated as hell right now and wait times are long. So it makes sense that he just focuses on this neighborhood where he can jump from building to building and shit.

But that's why I said he's the least effective superhero. Now him also not being able to see anything certainly doesn't help his case either, but again we're not focusing on that. Every other superhero operates in a larger area. Daredevil does nine blocks. Good for those people that live within those nine blocks, but if we're looking at some statistics of total people protected by the various superheroes, you have to imagine Daredevil is at the bottom of the list.

And don't get me wrong, I like Daredevil. I kind of loved the Ben Affleck movie even though it was trashed. Jennifer Garner was one of my first celebrity crushes. And I thoroughly enjoyed the Netflix show which was extremely well done. I don't read comics, but I'm sure they're good too. This isn't a knock on the storytelling of Daredevil at all. I'm just saying that if you're in trouble literally anywhere in the world outside of Hell's Kitchen, and you have your pick of all possible superheroes to come save you, Daredevil has to be at or at least very near the bottom of your list.

So I posted the video version of that Thursday Thought on TikTok. I actually debated it at first because I didn't know if there was a big enough TikTok audience that knew Daredevil well enough to understand the Hell's Kitchen thing. It turns out there are plenty of people on TikTok who understood and were not happy about it.

I will show you my video, some of the comments, and some of the response videos where people were FUMING.

And here some of the angry comments:

Yeah I hate when my imaginary fake superheroes get TOO BIG FOR THEIR BRITCHES AND SAVE THE FUCKING WORLD.

This was the constant thing that people kept saying - he's a street level hero who only operates on certain blocks. That, to me, just proves my point. 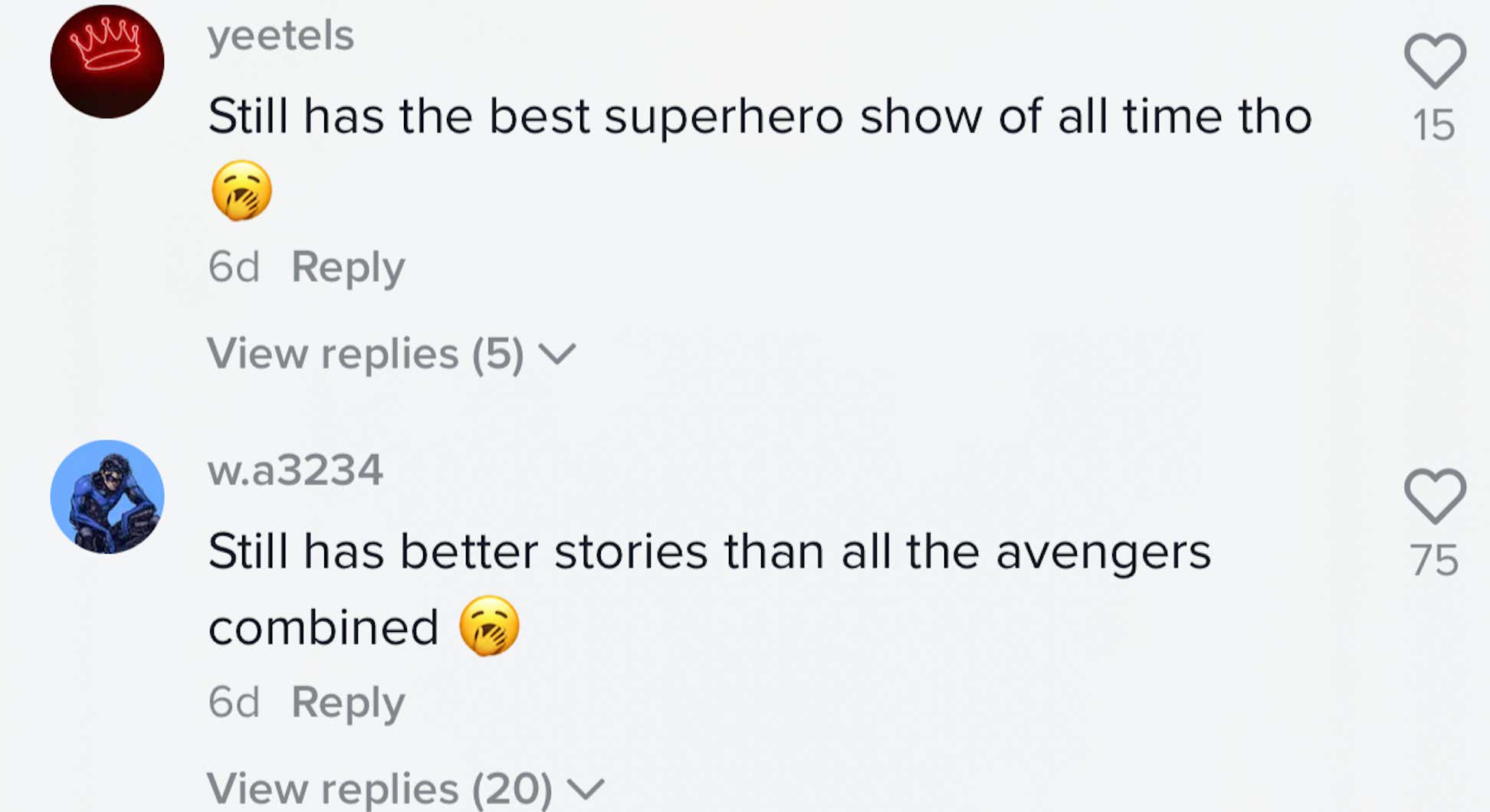 Hit with back to back yawn emojis. Tough.

A fantastic counterpoint by me.

These are all just reasons that they are better superheroes?

Love when my superheroes set up reasonable goals. That's what it's all about!

I really don't even know how to respond to this one. Does mxlpxl know that Daredevil isn't real? That he's a fictional character in a fictional universe? I don't want my superheroes fighting capitalists. I want to see them beating up bad guys.

This comment is a nice segue into the most ridiculous response video I got. A theme started where people turned my joke about a superhero into a larger point about marginalized communities and systematic oppression. Quite a reach. Here is the best one.

The whole video is so absurd that it's borderline must-watch territory. But the best part of it is the question she poses at the end.

"What is more noble? Stopping an alien attack on New York City? Or being the person that wants to make sure all the low-income people who lived in a rent-controlled apartment that was destroyed in the alien attack don't become homeless when developers want to take the opportunity to build luxury condos where they used to be?"

Uhhh… definitely the first thing. Saving the world is like the most noble thing a person can do. Priority numero uno. Everything else she's talking about literally cannot happen unless the world is saved in the first place.

Here was my full response.

As I said in the video above, even the people in this low-income building would agree with me. If they were about to get their faces melted off by aliens, and Daredevil showed up promising them good deals on rent should this all go south, even they would say, "Thanks Murdoch, but not fucking now. Can you go grab Thor or someone? The world is about to be destroyed."

Then we have this girl who accused me of being an ableist.

Again, my point is not about him being blind! It's about his geographical limitations! "I'd take a Matt Murdoch over Tony Stark any day of the week." Hey lady, let's see if you are still saying that if you're in trouble on the Lower East Side and Daredevil's going to need a 45 minute commute to get to you. Or you can instead have Tony Stark FLY IN THE SKY to save you. How is this an argument???

Some other TikToks from this very mad community. This guy really almost burst into tears.

I don't think this guy knows that Daredevil is a fictional character. He kept referring to him as "Matt" as if they had a high school chemistry class together. Then he starts talking about Daredevil's girlfriend becoming a heroine addict? What the fuck? Lois Lane never shot up.

"Superman can fly. Batman can drive. And fly." He said those things as like a mic drop to prove me wrong, when all he did was prove me correct. Those are reasons they're better superheroes! "Oh you think Daredevil is better than Superman? Well, Superman can fly and Daredevil can't. Ha! Take that!"

I need to know if this guy knows Gotham city isn't a real place. I need to get that answer.

This girl might murder me in my sleep tonight.

Look, I never expected to get into this underworld but I'm sure glad I did. My favorite part of working on the Internet is getting in the weeds with an obscure community and just trolling them. I've had it with the vape community, Texas A&M baseball fans, global warming activists, and others. I can now add Daredevil fans to the growing list.

Let's end with some funny tweets from people who are actually normal.

Stay safe out there everyone. And if you're ever in trouble, don't call Daredevil.