Daily Mail - A body confident mum was 'livid' to receive a 'bum note' tucked under her car windscreen wiper demanding she shut her blinds because her neighbour says their kids 'don't want to see your a** out'.

Alex Taylor, 26,  was stunned when she went to her car at 8.30am on Monday to discover the prudish ticking off after apparently being spotted in her undies in the window of her Chelmsford, Essex, home on Saturday night.

The mum-of-two had thrown a t-shirt on over a pair of French knickers while locking her door and turning the lights off at around 10.30pm before heading to bed - and apparently had a disgruntled audience. But the cheeky note has instead emboldened the size 8 car sales manager to strut around in her lingerie with the blinds open more often in the privacy of her own home.

The note read: 'It would be much appreciated if you could unleast shut your blinds when walking naked! Around your house… my kids do not and would not want to see your a** out on the show. Much appreciated, your neibours.' [sic]

Alex said: 'It's the most bizarre thing that's ever happened to me, I can't get my head round it. 'I wasn't walking around naked. I was wearing a t-shirt and French knickers - they covered a lot of my bum. 'To be honest they're lucky because normally I walk around in a lot less than that. I just went round as I normally do, locking up and turning all the lights off.

'They're lucky they caught me quite covered up on this occasion,' she added. I'm very comfortable in my own skin, I have no problem with the way I look.

'I'm not too sure what their upbringing is to think that that's an issue, but also to think it's ok to look in someone else's home and tell me how to dress.

Did anybody ever get caught with "their hand in the cookie jar" as a kid growing up and get forced to apologize or rectify the situation against their will? Basically like one of those Al Quaeda hostage videos where you denounce your country on camera even though deep down you really fucking love it, you just don't want to have your head chopped off?

For me it was when my mom was "cleaning" my bedroom when I was in highschool and found one of those sports teams garbage canisters full of alcohol buried underneath some footballs and baseballs.

I literally had one of these things-

in the corner of my room that I would stash half empty bottles of Bacardi Limon, warm cans of Natty Light, and anything else we could get our hands on over the weekend, in this thing, cover them with sporting equipment, and save them for the following weekend. I thought I was real fucking sly until one day I came home and my mom had them all lined up on the kitchen counter staring at me with her arms folded.

Rather than just yell at me, she decided to "teach me a lesson" and make me pour each and every ounce of alcohol I had collected down the sink drain in front of her and my little sister.

Holding back tears, I obliged. And as the sweet aromas of warm sprite mixed with Svedka hit my nostrils, I thought of how many man-hours recruiting homeless people, and college kids at Belmont St. liquors went into acquiring everything I was now just tossing down the drain.

That's basically a long-winded anecdote to describe what actually happened here. These weren't some kids gawking at some milf's butt cheeks next door.

This was a husband. I've never been more sure of something in my life.

This bitch's husband, probably had an entire morning ritual that had been going one for months. Get up before the wife and kids, walk the dog, make some coffee, and sit in front of the window waiting for (checks name) Alexandria to come downstairs to her kitchen in nothing but a tiny t-shirt and her "knickers".

And he woulda got away with it too if it wasn't for those meddling kids of his.

Guarantee his kids cam sprinting downstairs one day, with mummy in tow asking him what he was doing with his nose pressed up against the window.

From there we know how the rest of the story goes.

Wife throws a fit, guy doesn't hear the end of it for a fucking week straight, and he's forced, at gunpoint (metaphorically speaking) to write this hostage letter and leave it on the neighbors with the nice ass' car windshield. 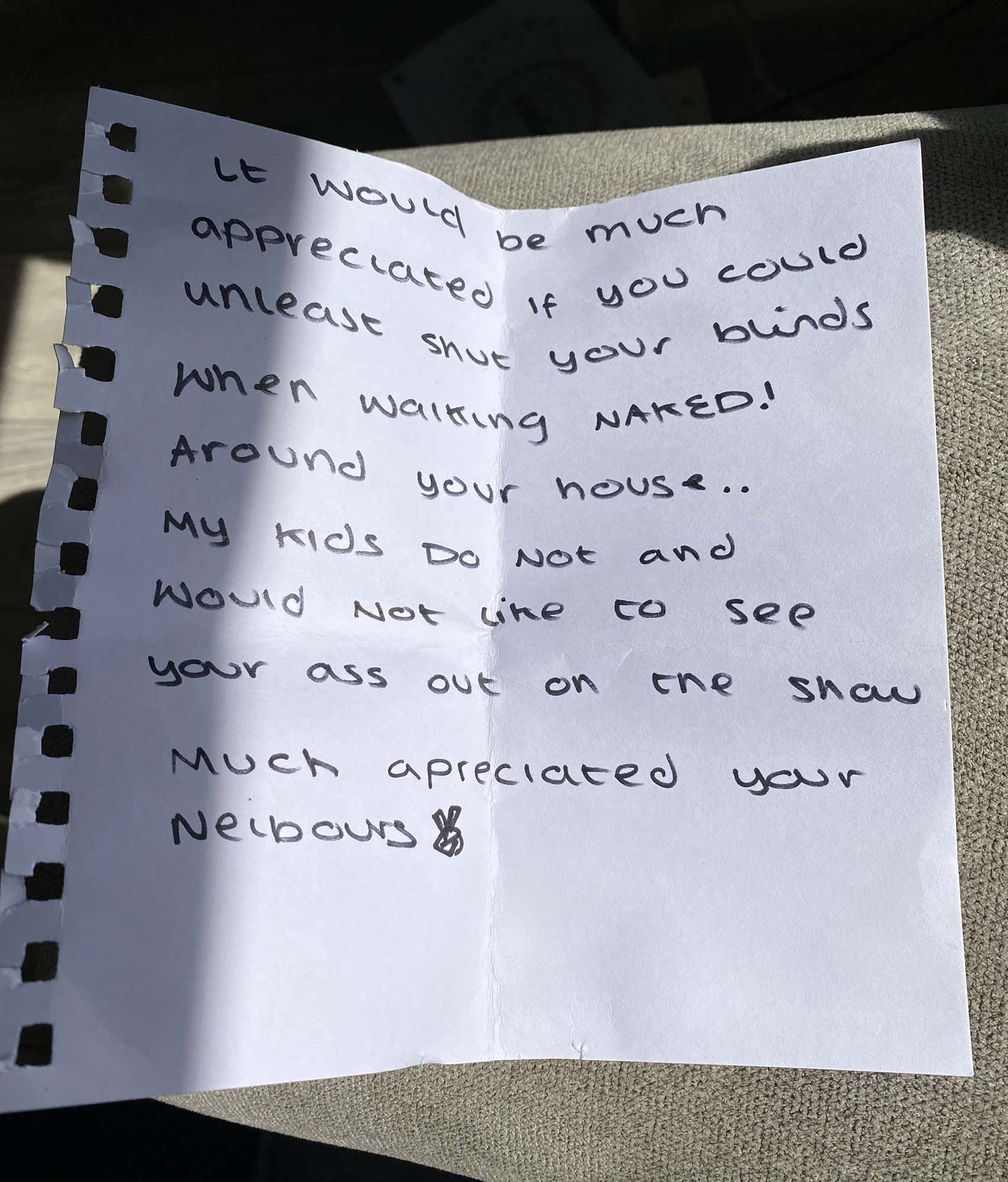 The worst part is abiding by the terrorist (his wife's) demand doesn't even earn him any goodwill. Poor guy will be in the doghouse the rest of his fucking life.

He should have just let her chop off his head.