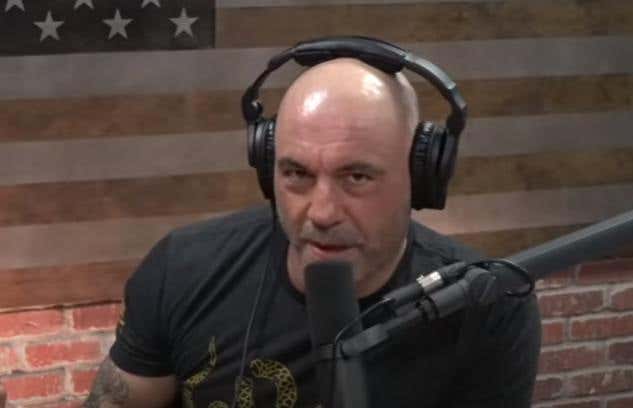 Reasonable people can have differing opinions on Joe Rogan. You can't get to where he is - with the No. 1 podcast in the country, doing 15-20 hours a week of giving opinions and often standing on the third rails of topics during the most divisive time in most of our lives - without being a little polarizing.

Personally, I'm a fan. And have been ever since I first saw him do stand up in person, at a showcase I was in at Nick's Comedy Stop in Boston, after he had already been blowing up in New York and was back in town visiting and doing a few sets. (As a personal aside, my sons have never been the slightest bit impressed with anything I've ever done except for when I told them I'd opened for Joe Rogan a couple of times.) Even back then in the 90s, he was fearlessly making jokes about subjects that would horrify half the audience. His bit about TV executives telling Corky that Life Goes On was getting canceled comes quickly to mind. But most importantly, was always fucking hilarious.

Which is what I like about his podcast. That and the fact that he regularly has on people who disagree with him on a range of subjects, they challenge each other, go back and forth, exchange opinions, and at the end of the show, they invariably still disagree, but no one's called anyone a Fascist, a Marxist or a Nazi. Instead, they had one of those things used to exist but is on the endangered species list right now, an actual conversation.

I like to think we can bring that art form back from the brink of extinction and shows like Rogan's - and of course every Barstool Sports podcast, supported by our amazing sponsors whom you should doing business with - can help. But apparently we've got a long way to go:

Source - “The Joe Rogan Experience,” America’s most popular podcast in 2020, is upsetting some Spotify staffers, according to a report. …

“I’m personally bothered by his transphobic comments and am concerned with the way he might spread misinformation,” one Spotify employee wrote last fall on an internal networking channel on the app Fishbowl, Insider reported Tuesday.

A former employee told the publication that, during his time at Spotify, the decision to sign a deal with Rogan was the most contentious one the company made.

However, another employee told Insider that it’s only “a loud minority of people who are outraged” at Rogan.

While only a subgroup of staff may be upset, their numbers were sufficient to merit a town hall meeting in September to address that they felt Rogan’s show was at times anti-transgender, the Wall Street Journal reported in October. A request by some staffers for “The Joe Rogan Experience” to receive editorial supervision was denied by the company and Rogan subsequently retweeted a video mocking the employees for being oversensitive. …

“In the case of Joe Rogan, a total of 10 meetings have been held with various groups and individuals to hear their respective concerns,” Spotify CEO Daniel Ek said in a September meeting, Vice reported at the time. “And some of them want Rogan removed because of things he’s said in the past.”

Imagine the balls you have to have to be a staffer at Spotify and think that, because the number one talent at your company has opinions that differ from yours, that it's management's duty to reign him in with "editorial supervision." Which can only be code for, "edit out anything that's said that I disagree with."

What kind of a raging narcissist to you have to be to demand that and expect your bosses to go along with it? How the fuck have we created a world where employees of a company think the right to have an opinion is less sacred than their right to be protected from opinions they don't like? You don't have to agree with everything a talk show host says, or some of it, or even any of it, for that matter. I certainly don't agree with all of Rogan's takes. But a key part of adulting is being able to listen to what's said, process it, and use it to hone your own opinions. You should stop sticking your fingers in your ears and doing the "La la la! I'm not listening! La la la!" thing by the time you grow your first pube.

Not only that, but this staffers whole world view is so self-entitled that they forget their place in the company versus Rogan's. Without knowing a thing about them, I can promise you that when there's a major weather event in their area and FEMA tells "all non-essential personnel" to shelter in place, they're staying home. Hell, if any of them get T-boned by a garbage truck on the way to work one day, Spotify stays open for business. But if Joe Rogan comes down with laryngitis for a week, it costs the company millions. But instead of explaining that and telling them to keister their indignant complaints, management burns thousands of calories and otherwise productive work time trying to placate them.

I'm trying to put myself in their shoes, and there's just no way. If say, I objected to the way the Pardon My Take guys conducted one of their signature humorous, light-hearted interview or was offended by KFC's shameless support of the Mets and demanded my bosses start exercising some "editorial supervision" to spare my feelings, I think the total time Dave and Erika would spend on my complaint would be however many seconds it takes to type "WTF are you talking about?" And there would be no follow up email. Because, in spite of what you hear about this company sometimes, we're goddamned grown ups.

Which I guess makes us a rare breed in the once proud field of American business. Along with people who have opinions and can accept those of others. Come to think of it, successful media outlets like ours and Joe Rogan's are pretty rare too. And getting rarer by the day. My guess is that is not a coincidence.