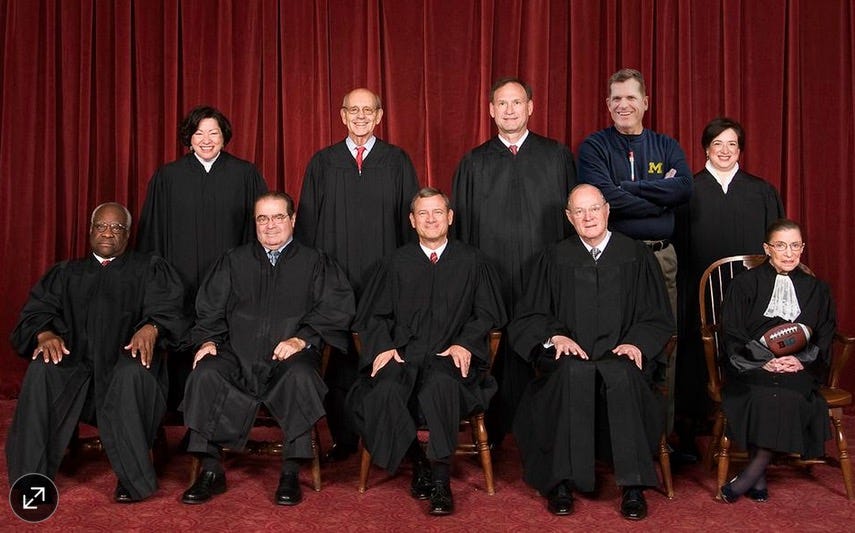 WSJ – A software engineer named Nick Harris was visiting Washington, D.C. one morning when a stranger outside the Supreme Court asked him for directions to the White House. It was only a brief interaction, and yet Harris remembers it well.

“It was very odd,” he said. “Like, why am I running into Jim Harbaugh at the Supreme Court?”

Then again: Why not?

The surreal off-season of Michigan’s new football coach has reached the point that there is no place on the planet where Harbaugh could show up and surprise anyone. He has popped into campus Ultimate Frisbee practices, played catch on Paris’s cobblestone streets and picked organic bananas in Peru. He also hung out with half of the Supreme Court of the United States.

On that morning, Harbaugh had been strolling the halls of the nation’s highest court, where he says he scored meetings with five justices.

It was a tour that every law student dreams about. Harbaugh shook hands with Justice Anthony Kennedy. He snagged a picture with Justice Ruth Bader Ginsburg. “Very dynamic speaker,” Harbaugh said in an interview last week.

In his return from the NFL, Harbaugh has provided near-daily reminders that he isn’t like anyone else in college football. Everyone else in sports wants to meet the president. Harbaugh is the guy who goes to see the Supreme Court.

The American legal system is the best in the world. Today, it got a little better. Just knowing that the brilliant mind of Jim Harbaugh was wandering through the halls of the Supreme Court analyzing it all, personally sitting down with each justice to go over the effective and the ineffective aspects of the operation. Dishing out advice, Bear Bryant books and pitching Michigan football:

He gave Justice Elena Kagan his heavily underlined book about legendary Alabama coach Bear Bryant. She then asked him to sign it.

Harbaugh also sat down in the office of Chief Justice John Roberts. “He showed me the Declaration of Independence written in stone,” he said. “Very memorable.”

But he really hit it off with Justice Clarence Thomas. Harbaugh says he tried to sell Thomas, a noted Nebraska football fan who drives his RV to Huskers games, on adopting Michigan as his second-favorite team. “I got the feeling it would be a distant second,” Harbaugh said. (The justices declined to comment on Harbaugh’s visit.) Harbaugh, however, was smitten with the Supreme Court’s quietest justice.

Let’s just say America is in a hell of a lot stronger place right now than it was before.

Harbaugh and his dad Jack even have been guests of Judy Sheindlin’s show. He’s also played gin with her, too. “She’s much smarter than me, let me tell you that. And she’s a much better gin player. I’d hate to be compared to Judge Judy.” [FTW]

Not just a football coach, no no no. Exactly the kind of fresh voice we need around SCOTUS to keep them on their toes. I only hope that Clarence and Kagan took all his points to heart – Power-Coast offense and judicial review, that’s what Jim Harbaugh does.

PS – “He’s just being Jim Harbaugh” – the most fitting motto ever.