I am not even mad at Cosby for what just happened.

(Of course, I still hate him for all the rapey shit... Don't be an idiot.)

He was guilty as fuck, but he was also a wealthy man who desperately wanted to get out of prison, so he bought his way out... I bet that old cocksucker is not even blind.

I'm mad at the system for letting him pay for a crack just big enough to slip through.  However, if I had the means, I would pay out the nose to bend the law in my favor also… So would you.

As a matter of fact, I have paid out the nose in order to avoid smaller punishments like points on my license for speeding or suspension from trading for front-running customer orders… On both of those occasions, I was 100% guilty of speeding and front-running, but that didn't stop me from trying to defend myself by any means necessary.

So it happened… Cosby did it, but he's free.  Throw that on the pile with OJ's tee times and Epstein's noose.

What I don't get is the public support from others. 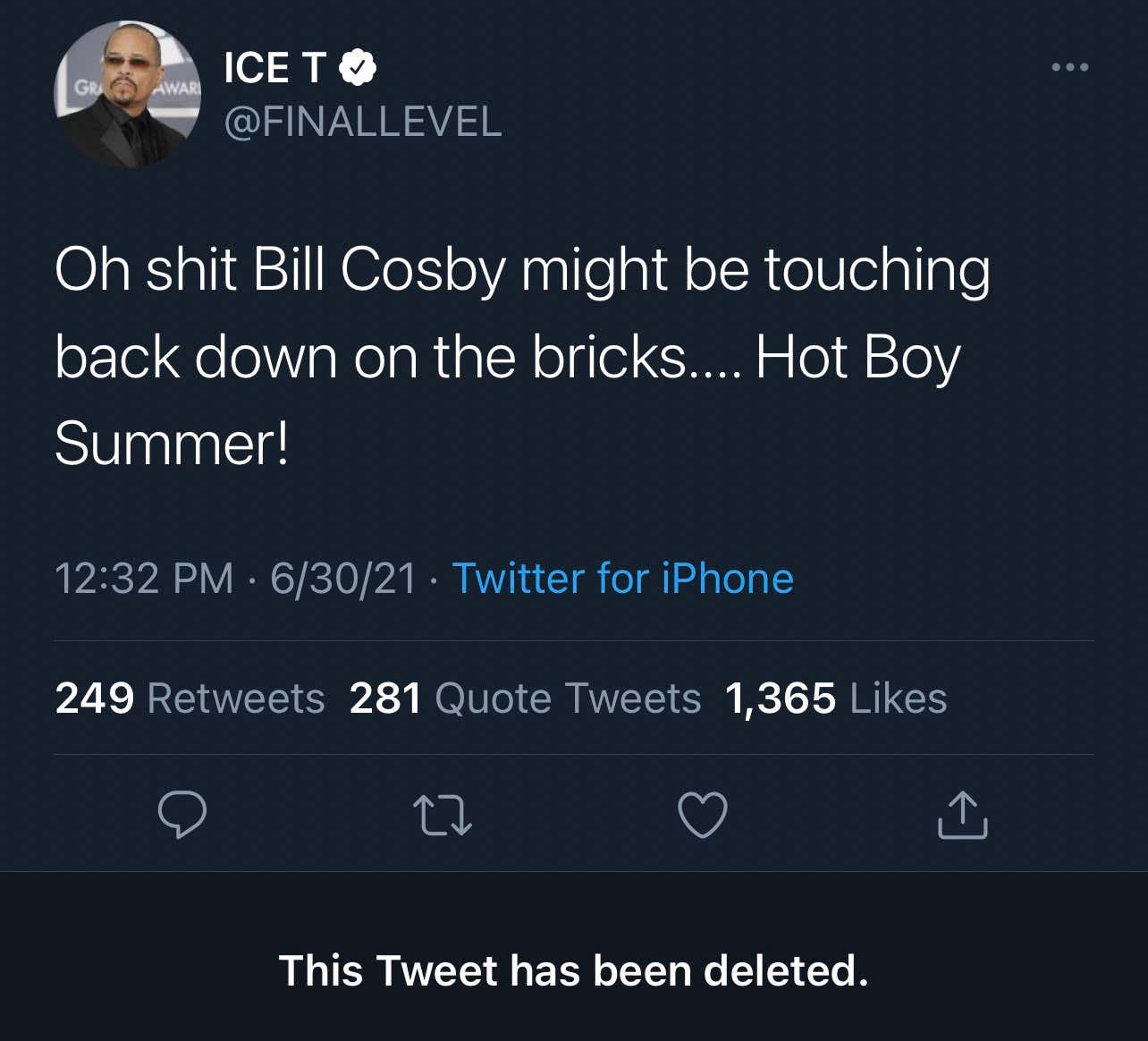 In the criminal justice system, sexually-based offenses are considered especially heinous. In New York City, the dedicated detectives who investigate these vicious felonies are members of an elite squad known as the Special Victims Unit. These are their stories.

Maybe Ice T was just trying to be funny, but in the age of unnecessary cancellation, I think there are some people you just have to treat like kryptonite, and "Pill" Cosby is definitely one of them.

Now check out this cunt…

Last month Rashad was named dean of the Chadwick Boseman College of Fine Arts at Howard University, and I am not sure how Howard University gets down, but I am pretty damn sure the dude who played Black Panther would've been smart enough to realize that the Pennsylvania Supreme Court’s decision to release that old rapist in no way exonerated Cosby of the charges against him.

And the fact that she used the word "miscarriage" in a tweet that is directly linked to a disgusting old man forcing his flaccid cock into DOZENS of drugged-up women for the express reason of filling them with barely motile sperm makes the term "miscarriage" seem particularly inappropriate.

This is not a call to cancel Rashad now… I really haven't given a shit about that bitch since she let Apollo fight that big Russian knowing full well he would be killed.

(Coincidentally, that's how I feel about Cosby.)

But it is a call to Phylicia, and Ice T, and whoever else wants to voice support for a guy who may have been wildly entertaining at one point, but is now wildly despicable that maybe you guys should go against your better judgment and just shut-the-fuck-up this time around.