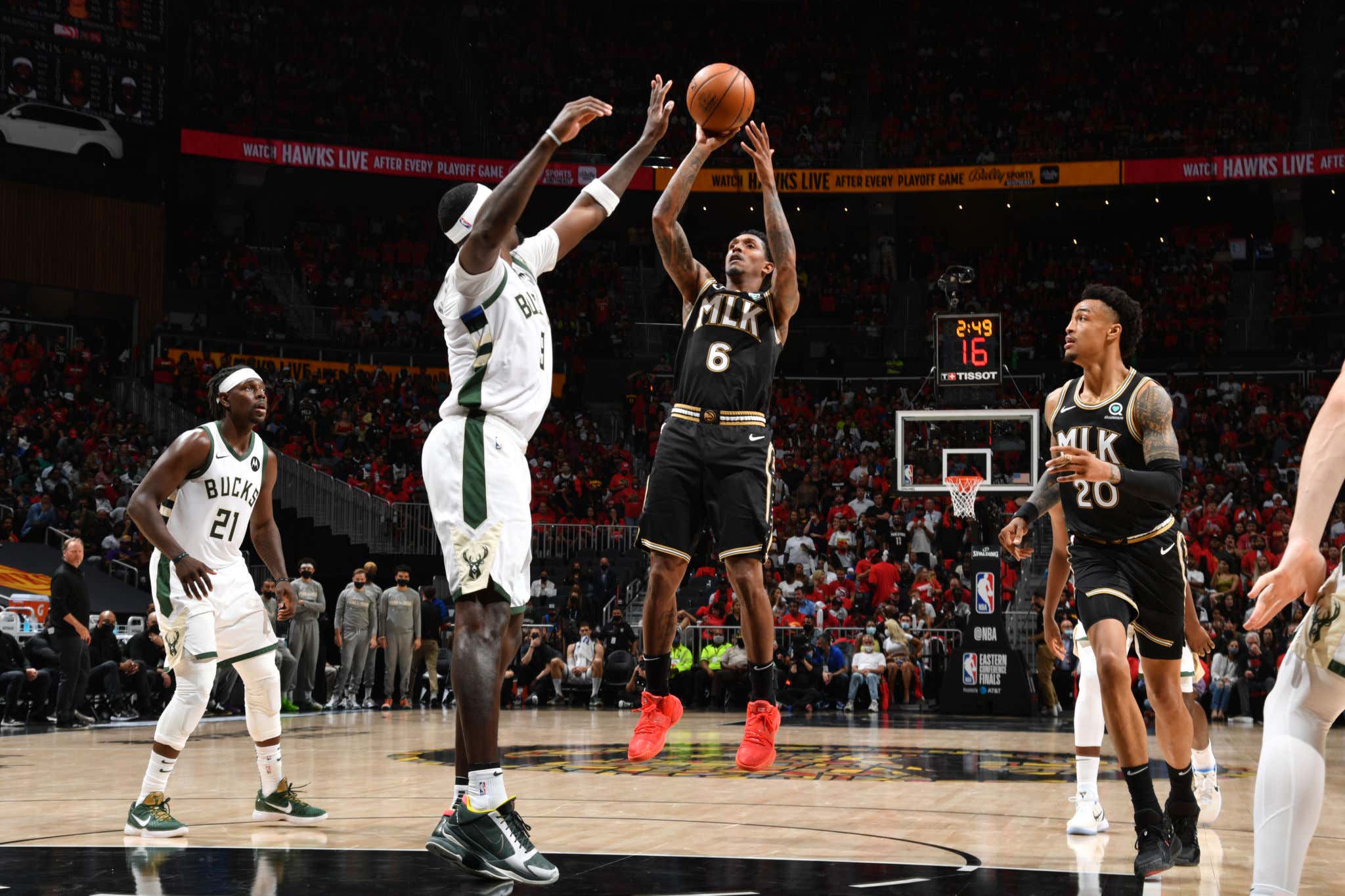 The Trae Young news was supposed to be the kiss of death. How could a Hawks team whose success is so dependent on the brilliant play of their star point guard manage to salvage their homestand and beat this Bucks team? The same Bucks team that had won the previous two games fairly easily? It sucked. Injuries have fucked this entire postseason up and little did we know it was just a sign of what was to come. But just like they've done a billion times during this magical postseason run, the Hawks responded to the challenge. Only an idiot would count this team out right now, Trae Young or not. Doesn't matter if they get down 25 or some shit to a #1 seed or are playing a #3 seed without their best player. This team finds a way to gut it out. The second you write them off it only enhances their powers.

Listen, the Hawks did not trail for a single second in this entire game. Not one second. It was only tied twice all night, and that came in the first quarter. When I say the Hawks dominated this game I truly mean it, it's not hyperbole. They set the tone early and never let their foot off the gas. Safe to say it's your night when you're getting plays like this

I've seen that shot before

So what the hell happened. Well for starters, there was one person who saw this coming and his name was Draymond Green

This is wild because historically, Lou Williams kinda stinks in the playoffs. For his career he averages 11 points on 39/27% shooting in the postseason. This year he's putting up a massive 6.5 points a game. He had 13 total points this ENTIRE SERIES heading into tonight. I actually looked it up and can say confidently that this was his 3rd best postseason performance of his career (G2&5 vs GS in 2019). So it was not exactly a given that Lou Will was going to carry the Hawks the way he did tonight. This is why when Draymond talks basketball, you listen.

as well as some great minutes from K'Von Huerter and Cam Reddish. I'm interested to see what Cam Reddish could bring to this series. He has great length and is going to be important for that second unit as long as Lou Will continues to start with Trae out.

Of course, we have to talk about Giannis' injury. Another star player who is probably going to miss at least 1 playoff game. That total would then be 11 guys who are #1 or #2 options to miss at least 1 game this postseason. It looked brutal in real time

and now we all sit and pray the MRI is clean. Here's the thing though. The Bucks really struggled long before this injury. Their offense was just so bad tonight. Brutal turnovers, Khris Middleton crashing back to earth after everyone called him a Batman, Coach Bud having no fucking idea what he's doing per usual, Brook Lopez getting eaten alive, just a disaster from everyone involved. It has to be so frustrating as a Bucks fan to see your team look so good one night and then look like a team that has never played the sport of basketball the next. I know how they feel to be honest. I spent the majority of the year watching and rooting for the most frustrating team to ever walk this earth, so I get it. Their offense looked horrendous even with Giannis playing and healthy. It's so bizarre. This team gets to the playoffs and all of a sudden cannot make a three. After being one of the best three point shooting teams in the entire league!

It sounds weird to say and even weirder to type, but I feel like the Bucks are built better when it comes to surviving without their best player. This Hawks team is sneaky deep as hell. They have guys on either unit that can light you up and carry a game. I'm not sure the Bucks have that. It's insane that at this point of the season you feel more confident in the Hawks than you do a Bucks team that has been here before. They've been dominant for the last few years, except for when it matters most.

The whole injury aspect of this series sucks, no two ways about it. But watching these Hawks take down giant after giant no matter who is on the floor has been so much fun to watch. Much like the Suns, you get big time team of destiny vibes from this group, and now they sit just 2 wins away from the NBA Finals as a 5 seed. What the hell is going on.