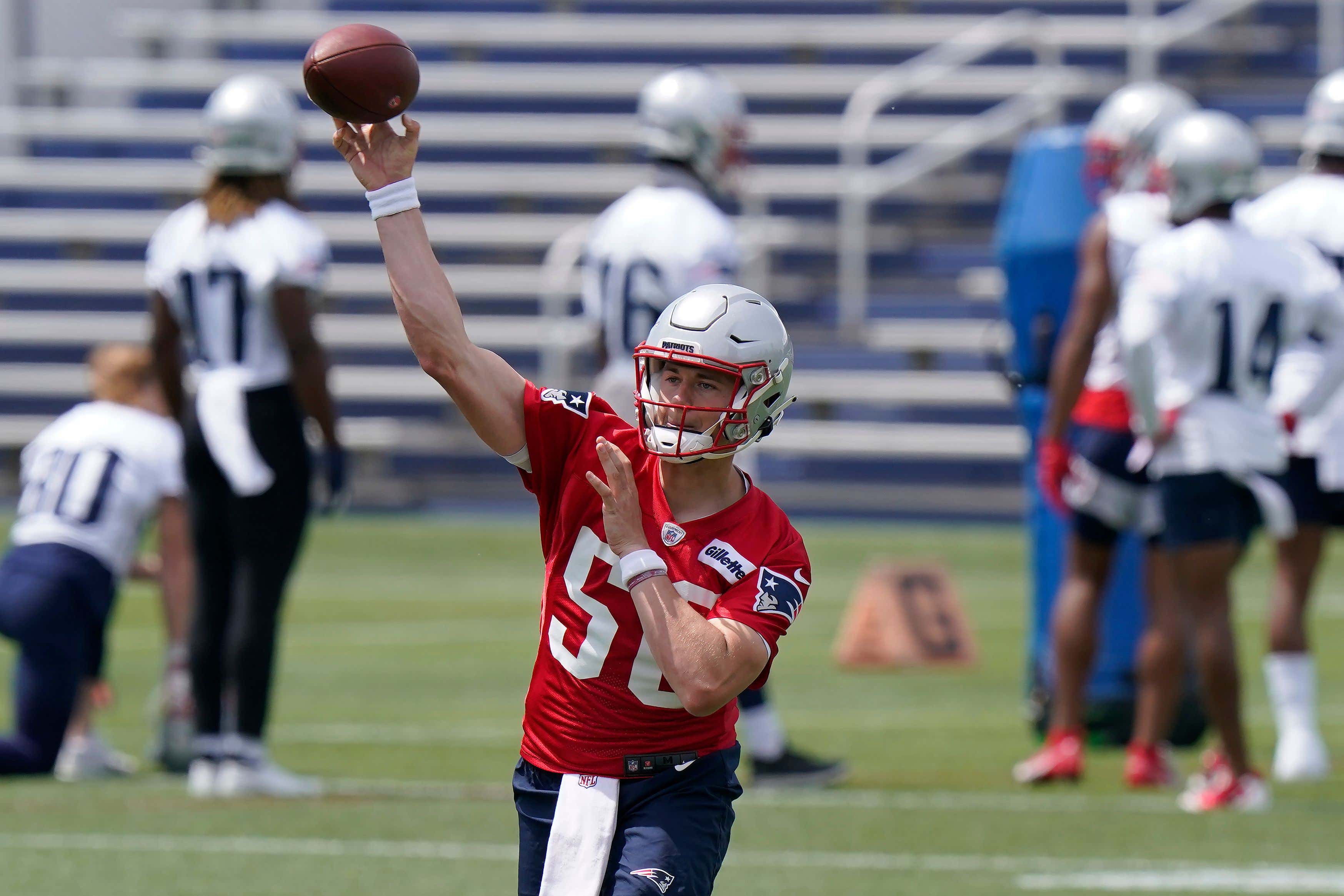 In the social circles I travel in - and even when I'd end up talking to someone I didn't know - the go-to conversational icebreaker in 2020 was always some variation of, "How are you holding up?" Depending on who I was talking to and what non-verbal clues I could pick up from them, the unsaid part of the question was either, "with the quarantine" or, "… now that Tom Brady is gone."

In 2021, that's been replaced with this one question, "So what's gonna happen?" And it's subject to only one interpretation. I've gotten it at stores, the gym, bars, cookouts, online and at Patriots training camp. And no matter who's asking, they're asking about Mac Jones and when he's going to take over as the starting quarterback.

It's only natural. On so many levels.

One, it's been so long since this franchise drafted a QB in the 1st round, you have to be old enough to remember hearing "Whoomp! There It Is" as a Top 40 hit, long before Tag Team sold out to Big Insurance.

Two, everyone loves a good quarterback controversy. And the last time we had one around here, science was telling us to eat lots of bread, Rudy Guliani was America's Mayor and I'm pretty sure you could smoke in the hospital birthing unit.

Three, Cam Newton had five passing touchdowns in his first 14 games last season and was benched three times. In a terrible year for America, nobody in the country was more accountable for his shortcomings or took more responsibility for his failures. We have a lot of leaders who should've followed his example. But unfortunately, he had a lot of practice.

So yes, New England is ready for a change.

I say all this because the more I think about what's transpired so far in the Pats offseason, the more I see a masterplan at work. I see Bill Belichick bringing Jones along in just the right manner, at just the right speed, pressing buttons and pulling levers to get his franchise QB ready for September.

Even with a relatively small sample size of practices for the media, you can extrapolate from those and see a bigger picture emerging of a mentor-mentee relationship between Bill Belichick and Jones. Obi Wan to Luke. Yoda to Luke. Miyagi to Daniel. Morpheus to Neo. Stifler's Mom to Finch. Granted, that last one isn't entirely applicable. But you know she taught him technique, ball security reading defenses, going through progressions, when to improvise and so on.

And I think the mentoring began even before OTAs, when Belichick brought back Brian Hoyer. Like I wrote last week during minicamp. Hoyer is getting barely any reps. He's her in a role as a hybrid player/coach. And it's not so he can be there for Newton or Jarrett Stidham. It's as an extra voice on the field and in the meetings. Someone with the professional approach and understanding of the system who can both metaphorically hold Jones hand as he goes through freshman orientation, but also to be a buffer in the quarterback room who's not trying to take anyone's job. He's certainly not here for the way he lit it up at Kansas City in his one and only start in four stints in New England.

Next, what my eyes told me at the two practices I've been to is that Jones has gotten extra stuff thrown at him the others haven't. Sometimes in terms of how many reps he gets (last Tuesday he had fully half of the 50 throws all four QBs combined took), but in what the defense is showing him. I can't prove it scientifically, but Jones has faced a more intense pass rush than the others. And that is by design. These have been non-padded practices. Full contact is contractually verboten. Meaning pass rushers are essentially unblockable. And quick-twitch edge rushers like Josh Uche can be in the backfield every snap, if that's what the coaches want. And against Jones, they've wanted it.

He's getting the tough love the others do not. Because it's the closest thing to Trial Under Fire they can give him without violating the CBA. While Newton and Stidham are left free to reacclimate themselves to route combinations and Hoyer drinks water on the sideline, Jones has been forced to quicken his decision making process. Swinging a weighted bat, so to speak.

As a result, Jones struggled in the last practice of the spring.

Which, if I had to guess - and I do, because I started down this path when I began the blog - delighted Belichick. I think it's no coincidence that Jones was given the most reps and the most challenges when the media was allowed into practices. So on Tuesday, the kid gets built up. On Wednesday, he's torn down. He goes off for a few weeks with coaching points, mistakes to think about, lessons to be learned. And yes, his confidence shaken a bit. So that he goes home an works on the things he needs to work on, instead of with teeming with misplaced self-assurance. Which an important step in the process for a guy who just put together one of the most successful seasons ever in the NFL's D-league.

On that point, I refer you to an interesting piece from my old WEEI co-worker Christopher Price in the Boston Globe, where he looked into how Bill Parcells handled that aforementioned last 1st round QB:

“I promise you I will not throw him to the wolves,” Parcells said of [Drew] Bledsoe. “He will not play until he is ready to play.”

Parcells also wanted to see how Bledsoe would respond to his coaching.

“We kind of figured Drew was the No. 1 pick, so the coaches will give it to him,” fullback Sam Gash said recently. “But that wasn’t how Parcells did it. I don’t know where he started on the depth chart, but I remember Parcells just being on him every day, just needling at him all the time, trying to get him off his rocker and see how he would respond to tough situations. He was an even-keeled guy. I mean, he would get pissed, but he handled it all."

If a guy can't handle getting bullied by early 90s Tuna, then it's best to find out right away he is not your future. By the same token, if your 2021 top pick can't hack being pressured in 11-on-11s in June or getting dissected in the film study at team meetings, how can you expect him to handle what Brian Flores is going to be shooting at him with interlocking fire in Week 1? This is the process. One that Jones should and will handle. Which is what Belichick undoubtedly talked about at length with Nick Saban over their many summit meetings plotting world dominance.

And by all accounts from writers with access to the inner workings of the team, that is precisely what is happening. From Mike Reiss:

When Jones had it going, the passing game most closely resembled what it had been for the better part of the past two decades from a timing, rhythm and accuracy standpoint.

And while there were some predictable hiccups along the way … it seems safe to say there isn’t another rookie quarterback over the past 21 years who is as far along as Jones is in the system this fast.

Mac Jones’s progress is worth noting. And the feedback I’ve gotten on Jones is that he’s what the Patriots thought they were getting when they took him 15th—which is to say he’s a heady field general, if somewhat limited physically. But I would not make much of who he’s lined up with during the spring. More than a couple of people who know that program well, both in reference to Jones and other guys, have mentioned to me how Bill Belichick works reps this time of year. And really, it reflects that the Patriots aren’t in a spot where it’s “competitive” for jobs yet. Belichick uses May and June for teaching, fundamentals and conditioning, and mixes and matches players throughout. … And my sense right now is that Jones has done enough in the spring to merit a real competition with Cam Newton in the summer.

In the early going, Jones has been taught, promoted, tested, corrected, pushed, taught some more, admonished, praised and no doubt at times frustrated. To put a word to that: mentored. By one of the great master manipulators in the history of the sport. And now there's no other way to look at this than the QB1 job his his.

All he has to do now is keep working his ass off and go take it.

I should probably print this blog out and carry it with me at all times this summer. But to that to me is, "what's gonna happen."