This week on The Dog Walk, we snake drafted Chinese Food shit. Before we get to the draft, it's pretty well known amongst the other Barstool Chicago guys that I don't like Chinese food all that much. I don't dislike it whatsoever, but I don't go out of my way to order it all that much. 1-2x a year where I'll pig out on fried rice, goons, egg rolls, etc. That's it. I just don't crave it in the "holy shit I could go for some Mexican food" or "holy shit I could go for some pizza right now" type of way. I know I'm the outlier there but whatever, it is what it is.

In fact, Ed even asked me prior to the draft if I could make it work: 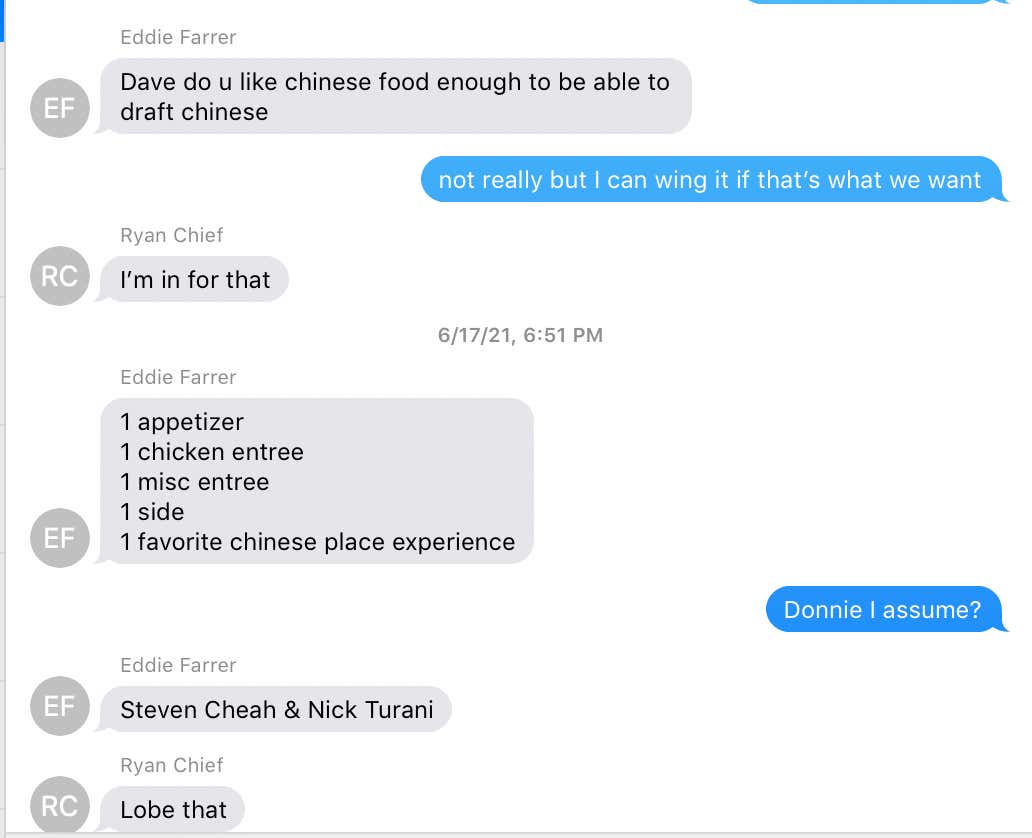 I wasn't going about to sit out a draft where I could make fun of Nick and his two dads for an hour plus. I was going to suck it up, even if I knew for me personally, it would be slim Pickens. Literally any time I order Chinese food, I order chicken fried rice, egg rolls and crab Rangoons. I don't go with General Tso's chicken or anything else. Never ever. Again, not that I dislike it, but if I'm gonna go balls deep in an order of takeout, more often than not it's gonna be Mexican food or pizza. Just how I roll.

But I got caught with my hand in the fortune cookie jar in the last round. Not to spoil picks, but I googled "best Chinese food entrees" for my misc entree category and saw a pic of Szechuan pork. Looked delicious. It looked so delicious that I drafted it, as a matter of fact.

1. No, I've never had it before
2. Anything else I would have drafted had already been drafted or I wouldn't have ever consumed it anyways because I eat Chinese food that infrequently

So I did what any man of integrity would do: I interrupted the entire podcast, called up the nearest Chinese food joint, and ordered Szechuan Pork.

The issue with ordering from Chinese food places is that you have to speak to Chinese people who don't speak the best English. Sometimes an order can get messed up by no fault of anyone's. Just how it is. As you can imagine, in an attempt to do what was right for the sanctity of the Chinese Food Snake Draft, my order got messed up. Instead of getting an order of Szechuan Pork, I got an order of Yu Change pork or something like that:

As you can imagine, it was pandemonium in the new Barstool Chicago HQ. All Hell broke loose. It was expletive after expletive and friendships were lost. That's just the game you play when you snake draft different things on a weekly basis, so I'm not even really mad at it. In fact, I did what any normal red blooded male that throws 91MPH and runs marathons would do - I ate the Yu Chang pork, an egg roll, a goon, and some chicken fried rice.

And it was delicious.