WARNING: THERE ARE SPOILERS THROUGHOUT THIS WHOLE THING. DON'T READ BEFORE WATCHING!

The episode starts with a TVA team searching for the variant in Oshkosh, WI in 1985. The team, like the last one we saw, was attacked and defeated by the variant. This time, they use some sort of mind control on the TVA team leader and use them to defeat the entire team. Loki goes with Mobius and the new team to investigate the site of the ambush, and seemingly stalls as the timeline grows more instable. They wipe the scene and leave, knowing nothing other than the variant left with a hostage.

Loki does some research to find out where the variant may be hiding, and comes to the conclusion that they must be hiding in points in time immediately preceding an apocalypses. Essentially, whatever the variant does in that point has no detectable effect on the timeline because that area is destroyed anyway. Him and Mobius test the theory by fucking around in the timeline before Pompeii, and realize that it doesn't have any effect, proving Loki right.

Loki and Mobius use this knowledge, combined with the Kablooie candy left behind in the cathedral in episode 1, to find out that the variant must be in Alabama, 2050 hiding out in a superstore that is about to wiped out by a hurricane. They go to the superstore, and the variant ambushes Hunter B-15, taking over her body and having a cryptic conversation with Loki. The latter says that he is just using the TVA for his own means, and says he purposely misdirected them and has a plan to overthrow the Timekeepers. He offers the variant a spot at the table, but the variant declines, saying they have no interest in ruling the TVA.

They have a little bit of a fight, with the variant stalling for time before setting off all of the reset charges they have collected at once, bombing out the entire sacred timeline. The TVA scrambles to react and goes into DEFCON 1. The Variant than reveals their true form, a blonde woman. She then opens a time gate and leaves, but leaves the door open. Loki has a chance to stay with Mobius, but walks through the door to chase after the Variant.

I loved this episode. It was very tight, funny and had some incredibly well done dialogue (especially compared to the previous two MCU series). Like with the last episode, we get what we love out of Loki, which is that smartass arrogance with some dry humor. We also get some more emotional depth with him going over the apocalypses files and seeing the actual events of Ragnarok. The world building they have done with the TVA has been outstanding, and I think the mid-century modern vibe has worked fantastic as a general vibe.

One aspect of this show that has been flying under the radar is how fantastic the music has been. It has really heightened a lot of moments, both suspenseful and emotional, and brought them to a level above what they may have been. props to Natalie Holt

Lady Loki: After the reveal, the prevailing theory is that the Variant is Lady Loki. In the comics, the spirits of the Asguardians find human hosts after Ragnarok, and Loki's spirit inhabits a woman's body. Later on, the character is simply presented as gender fluid.

The Locations: Here is the full list of when and where the bombings were: 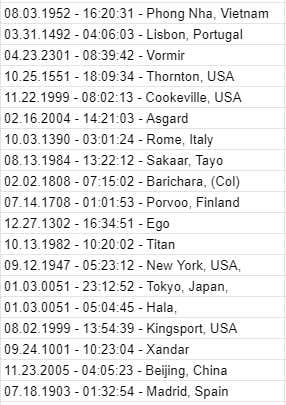 I googled all of these earthbound locations to figure out if something was going on, but there wasn't much there. I did see that in the MCU world, the Submariner (who will be the villain in the new Black Panther movie) stopped a villain named Tinfish from resurrecting the Nazi Party in New York, 1947. As for the other locations:

Vormir: This is the planet where Thanos and Hawkeye both get the Soul Stone.

Asgard: This is obviously the home of Loki, Thor etc. It was destroyed in 2017 MCU canon.

Sakaar: This is the garbage dump planet that is run by the Grandmaster, Jeff Goldblum.

Ego: This is the planet that is also Kurt Russell aka Peter Quill's dad in Guardians of the Galaxy Vol. 2

Titan: This is the former home of Thanos, and the site of the major fight sequence in Infinity War.

Hala: This is the capitol planet of the Kree Empire, and we saw a bit of it in Captain Marvel.

Xandar: This is the planet where most of Guardians of the Galaxy takes place. Thanos killed half the population of the planet and collected the power stone from them before the events of Infinity War.

There is one point where they linger on a pen that Ravonna has, and Mobius points out that it must be from "Her other favorite analyst", his second time using that phrasing. The pen says "Franklin D. Roosavelt High School", but I can't find the connective tissue there to the MCU.

My biggest theory, which has carried over from the first episode, is that the TVA is bad. Everyone in the TVA seems to walk on eggshells where they are concerned, especially Judge Ravonna. In the comics, the Timekeepers were created by the last director of the TVA before the heat death of the universe, but the first iteration of them turned out to be evil. They were defeated and replaced by good versions, but the bad versions would show up later on and pose as the real timekeepers to wreak some havoc and battle Wanda Maximoff. We may be dealing with evil timekeepers, or the timekeepers may not even exist. I don't know, but we'll find out!

In one of the foreign language credits, they credit Sophia Di Martino as "Sylvie". This sort of reveals that she is not, in fact, Lady Loki. It implies she is Sylvie Lushton aka Enchantress. Lushton was a regular human living in the town that became Little Asgard after Ragnarok. One day, she woke up with powers that were gifted to her by Loki without her knowledge.