The woman casually filming on the left asks a security guard casually filming on the right if they should call 911, to which he responds with the most indifferent shrug possible without even looking at her. The thief, who took the time to flip the kick stand up & everything, continues to fill a trash bag with store items. I mean... what a wild shot: 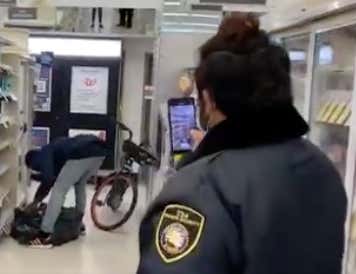 Security guy then makes a half-hearted one-armed grab at the trash bag while continuing to film with his other hand, and the thief gets away (excellent form keeping his head down & momentum up) with all the loot (face wash? shampoo? shaving cream?). 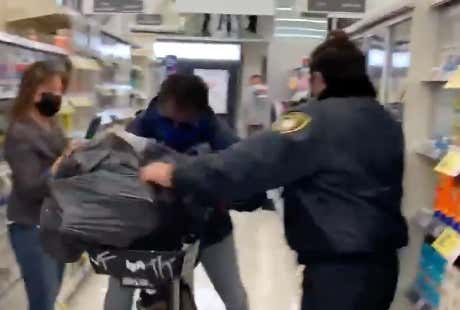 His pedals hitting the automatic door on the way out gives him more trouble than any bystander did, and he seems to take his sweet time figuring out which direction to go. Adding to the scene, he's on a city share Lyft bike as he commits this crime, which I'm guessing won't ever make it's way back to a bike dock.

As is to be expected, the comments on the video (nearly 3.3M views as of this blog posting) are an absolute shit-storm.. Whatever your beliefs you'll find something in the subsequent threads to piss you off & make you roll your eyes. Highly recommend if you're bored on the toilet or something.

As for my own thoughts on the security guard, he's probably seen enough at that store to do quick calculations on what he gets paid & know it's not worth the fight. For all I know his presence is just supposed to be a deterrent & the protocol is to film for the police or something. Plus, I wouldn't want to risk being harmed for skincare items either, not even if it were Olay Regenerist Age Defier, which I desperately need. I just hope he gets a solid TikTok out of it at this point.

**UPDATE: It's been brought to my attention that, according to the patch, the person in the jacket is not a Walgreen's security guard but an inmate security guard (OR they're just a person who really loves security guard jackets and found a sweet one at Good Will or something and they aren't a security guard at all. Who's to say). But that was my mistake for assuming & being too lazy to squint a little harder at the patch. I was wrong. Whatever the case, still just an absurd scene.