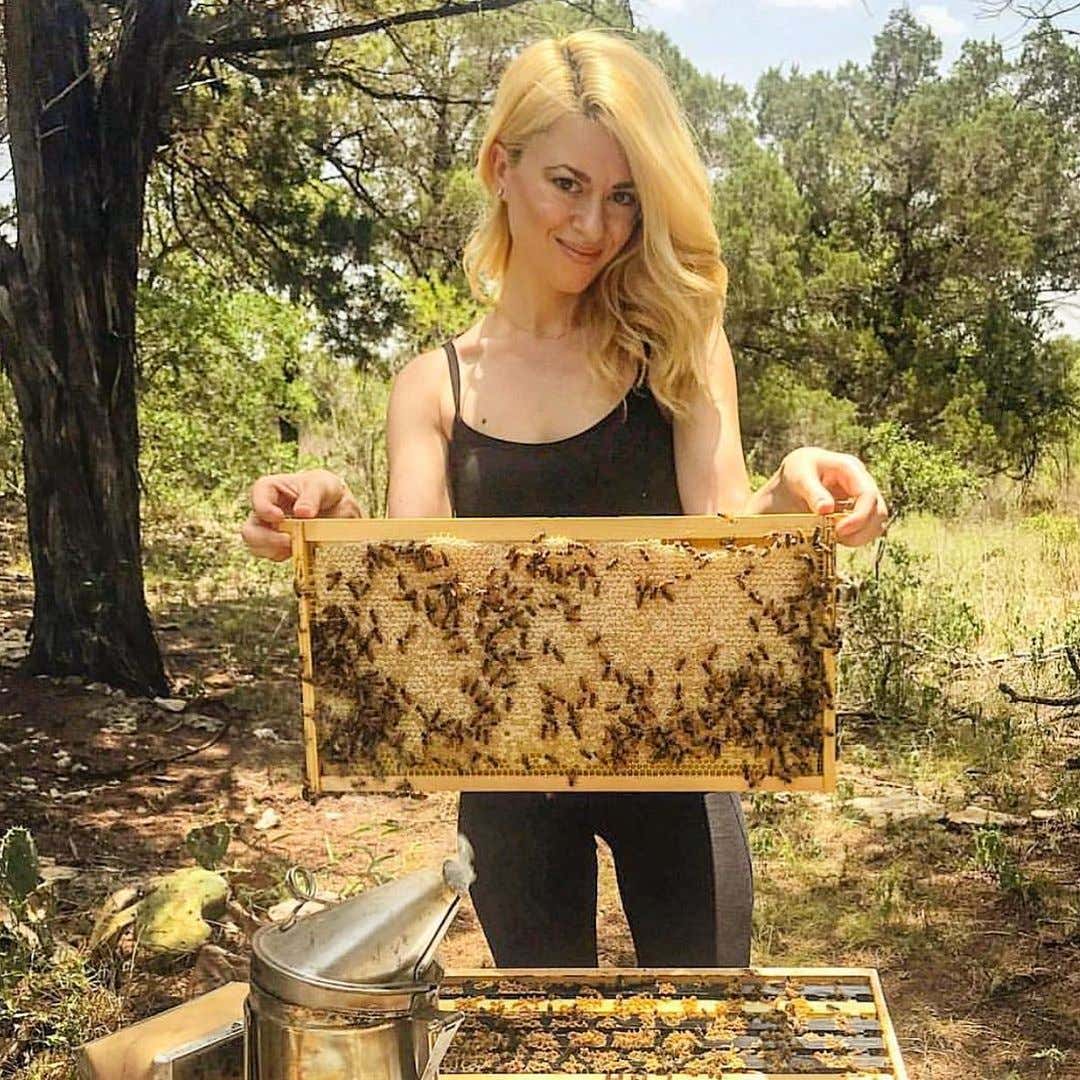 If you had bet me in 2009 that 11 years later I'd be writing the sentence "Smokeshow Bee-Keeper With 6 Million Followers Under Attack From Bee-Keeper Tik Tok (explanation of what Tik-Tok will be) For Not Wearing Correct Protective Gear, Staging Videos," I would have put my life's savings on it, on the spot. Nope, no way.

And that is how you'd be about $131* richer right now. Because now it's 2021 and I really couldn't imagine writing about anything else.

So what's the deal? Why does Erika Thompson, aka "texasbeeworks" on Tik Tok — whose positive energy leaks through the phone screen in every video as she works to save the bee population (which is diminishing at an alarming rate) out of the goodness of her heart — find herself on the defensive needing to fight back in the media about her beekeeping?

First let's meet her by watching her hype video:

People always ask me how I got started keeping bees, and my answer is always the same, "I just really love bugs!" ⁣

⁣Growing up, I spent a lot of time in my backyard with a net and a mason jar catching and collecting any insect I could find. My (amazing!) mom wouldn’t let me have a pet for the longest time, but I was a huge animal lover so I tried to keep the bugs I caught as pets…which didn’t always work out that well.⁣

My love of insects continued into adulthood, and when I saw the opportunity to take a beekeeping class, I signed up right away. I actually had no intention of becoming a beekeeper and I really just wanted to learn more about honeybees as a species. But as you may have guessed by now, I walked away from that class completely fascinated with bees. I began reading every bee book I could find and spent hours online researching honeybees. After months of preparation, I started my first hive in the spring of the following year in my backyard. ⁣

As my obsession with bees grew, so did the number of hives I kept. I started Texas Beeworks as a way to sustain my passion and keep more bees…and the rest is history!

Her most iconic moment came recently, as she came across a hive that didn't have a queen, meaning it was doomed no matter what she did.  Unless…

My knowledge of beekeeping is about 2 hours at this point, and even I know what I just witnessed was a pro's pro at the top of her game. As if the bare-handed scoop (!!!!) move wasn't enough…girl had a spare queen bee in her front shirt pocket. 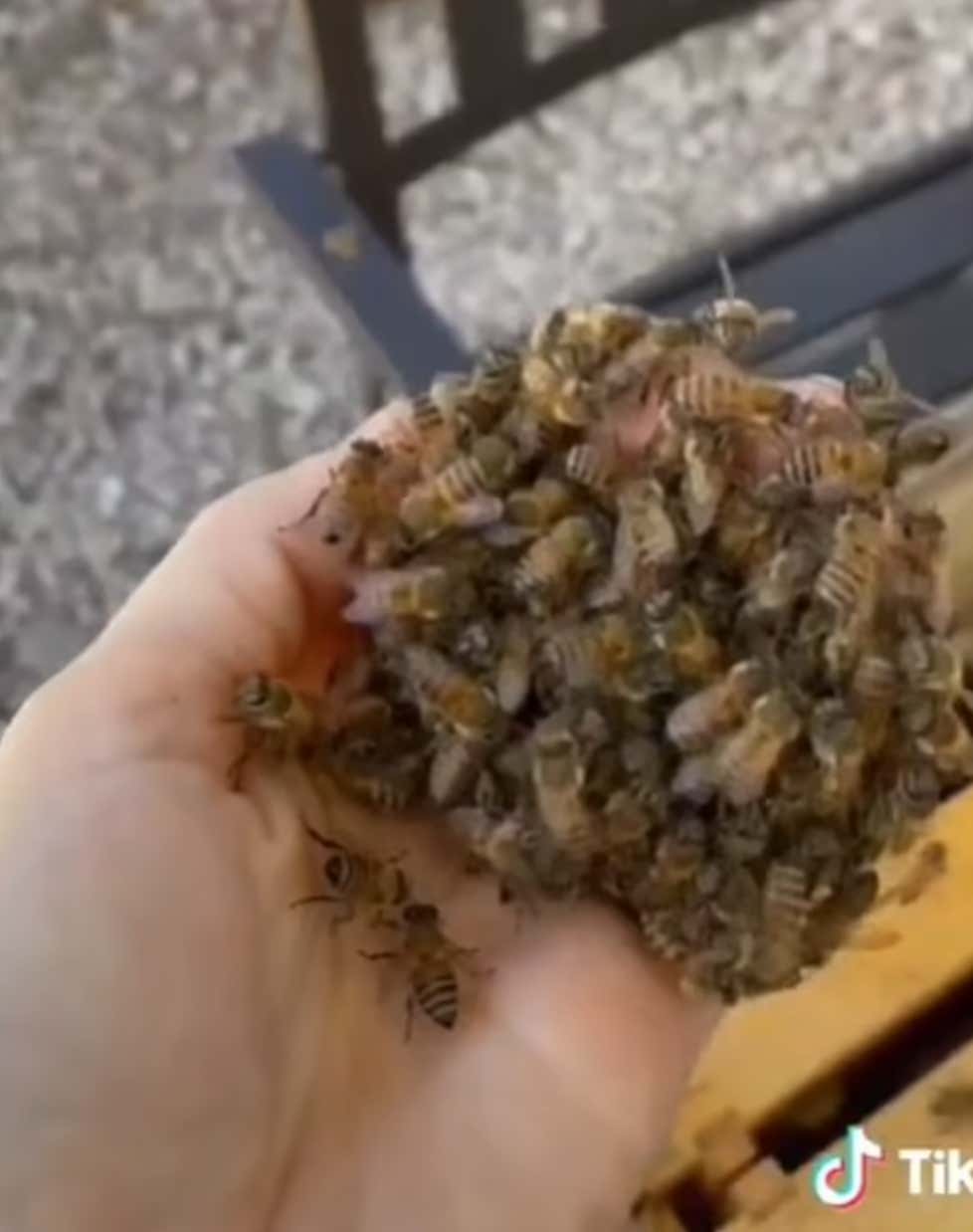 But you know what they say, you're nobody until somebody hates you. Or, they don't boo nobodies. Take your pick. Because it wasn't long until a lesser-known but equally as passionate beekeeper came for her throat:

Daily Mail -- After going viral with her TikTok beekeeping videos, Erika Thompson is defending herself after some have alleged she is a 'fake beekeeper.'

Thompson's TikTok video where she was seen scooping a 'queenless bee swarm' under an umbrella garnered over 23 million views.

However, another bee rescue claimed Erika's actions were dangerous and claimed she was not, in fact, rescuing the bees, which she responded to in a new Instagram post.

Slate (who else) interviewed some professional 'keepers who criticized some of her technique, but leading the charge was one woman in particular: @Lahoneybeerescue.

Lahoneybeerescue hates Texas Erika SO SO MUCH, and she didn't hesitate to let the whole world know…even dropping the hammer on her with the worst accusation on Twitter…."Trump supporter."

(For the record, nobody found any evidence of this on any of her social media, and her follows include "POTUS Joe Biden" but not Trump, as if any of this really matters.)

As a now-viral creator who does include educational information about bees in their videos, Texas Beeworks has the power to influence how their viewers interact with bees in real life, and that can be life-threatening. In a May 22 series, TikToker and bee professional @lahoneybeerescue notes that it’s nearly impossible to tell the difference between killer bees and less defensive bees without antagonizing them, something Texas Beeworks does not show in their videos. Bees are also reactive toward dark colors, like black and brown, making Thompson’s all-black uniform a dangerous example to follow. According to the beekeeping website bee hour, bees evolved to defend their hive from wild animals who usually have dark fur. This is why beekeeper suits are all white. And, of course, exposed skin risks stings. Basically, the masses should not think they can interact with a bee hive in the same clothes they wore to Target.

As a result, @lahoneybeerescue accused Texas Beeworks of being “fake.” “You can come in the comments and bitch at me and say that I shouldn’t be coming after other women and I’m not supporting her and whatnot,” they say. “No. I’m straight up calling her out and saying what you do is fake.” The videos were taken down after fans reported their account but were reuploaded to Twitter. @lahoneybeerescue has since had their account restored

“Even if she’s going in with the suit and doing the entire removal herself, she then takes off the suit and poses as bee removal Barbie, holding little bits of comb, wearing inappropriate clothes with her hair down, and it’s fake,” LAHBR says in another video from May. “She’s faking the job. That’s not what it looks like.”(Vulture)

It was headshots like that that Erika sat back and took while the media perpetuated the claims without getting her side. To think all this time, the swarm she had to worry about wasn't the millions of bees she was barehand scooping…it was her rival LA beekeepers  with the aid of the mainstream-media complex.

'Recently, a series of untrue and hurtful attacks was made about me and my work,' Thompson began.

'Then, journalists chose to support and reward this online harassment by perpetuating a false narrative without taking time to check the facts,' she added.

'It’s a sad day when people see a woman doing something that’s so outside of the norm, they assume there’s no way she can actually be doing those things, and if she is, she must be getting help from a man, Thompson continued.

We all learned a valuable lesson today: there is no industry you can go into or switch to that is less toxic than where you are now. Even Beekeeper-Tok will put you on SSRIs.

Slate spoke to two beekeepers who addressed the criticisms against Thompson, like wearing dark clothing: “Bees tend to dislike dark colors more than light colors. But I wear blue jeans most of the time,” said Michael Bush. And what about Thompson keeping a queen in her pocket?

“Pretty often, I have a whole pocket full of queens,” said Bush.