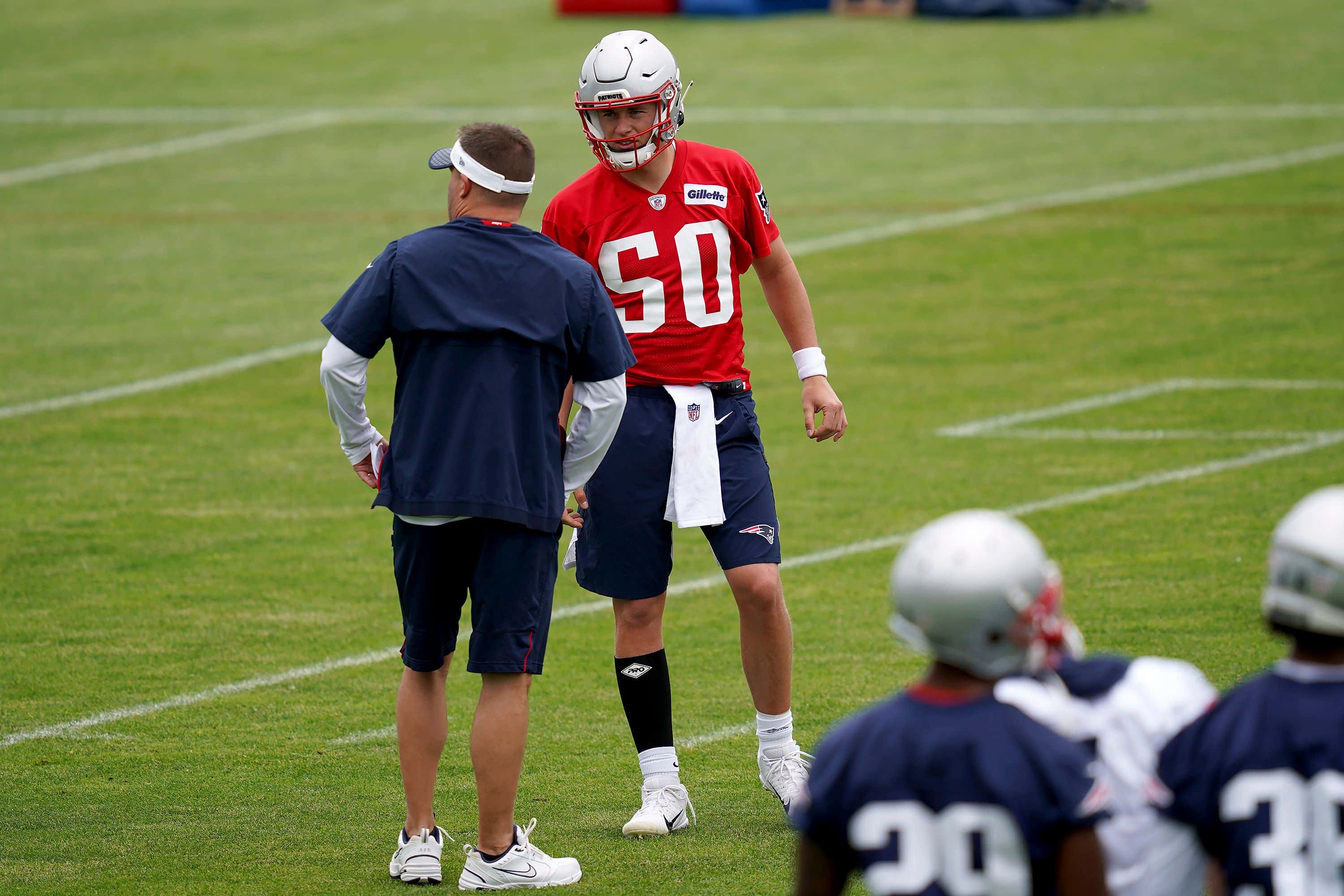 Let me add some perspective to that practically Buzzfeedish headline an define my terms. When I say "former glory" of course I'm not talking about the peak years like 2007 or '10 when they were absolutely cutting a swath through the league like Patton's army across Europe in 1944-45. But something approximating where they were between say, 2014-19. Consistently in the Top 7 in points scored.

Allow me to elaborate, since that is pretty much the whole point of blogging.

As I've referenced before, a few years ago Nick Saban said that, with prevalence of spread offenses, defenses have had to adjust by getting so much faster and smaller, that eventually someone is going to load up, bring back the Wishbone, and there'll be no one with the size to stop them. My words, not his: With the rest of college and pro football zigging to base nickel and hybrid safeties replacing linebackers, someone is going to zag to a jumbo attack and beat them into submission. The Patriots began to trend in that direction when they drafted LT Isaiah Wynn and RB Sony Michel in 2018. But even then, they were still a passing offense, throwing the ball 574 times to 478 rushing attempts. Last season was the firs time they ran it (502) more than they passed (440) since before Belichick showed up in 2000. The reason for that is obvious, and in no way am I saying we'll be seeing that again. This will still be a pass-first offense, as it should be. Regardless of whether it's Cam Newton or Mac Jones under center to start the year. The plan isn't to copy the Raven's homework.

But what they are doing is getting big for a primarily passing offense, plus keeping that rushing element. I've already written about the upgraded offensive line:

They still have Michel for another season at least. Last year Damien Harris established himself as a lead back, with a 5.0 YPA that was tied for ninth best in the league. And they added a 6-foot-0, 230 pound rookie who is drawing comparisons to LeGarrette Blount:

All of which should be a positive. But I say again, as a complement to an attack built around the pass.

Even though the new guys, especially Jones, are still operating with Fisher-Price's "My First Josh McDaniels Offense," you can already see how they shaped it in free agency to be a passing version of what Saban was talking about. It's an attack built around two big, accomplished, veteran tight ends in a league that's gone to base sets of three and four wide receivers. Where slot corner has become a starting position in the league and linebackers under 240 pounds are the norm.

Doug Kyed of NESN did some excellent analysis on the effect of adding Hunter Henry and Jonnu Smith to this unit:

NFL teams, as a whole, only used two or more tight ends on 28.4 percent of snaps in 2020. … The Patriots will essentially be running a completely different offense than what defenses are accustomed to combatting. …

Josh McDaniels only used two tight ends on 34 total snaps (3.5 percent) in 2020. New England never put more than two tight ends on the field at once. The Patriots had far and away the lowest rate of multi-tight end sets last season while leading the league (37 percent) in 21 personnel (two running backs, one tight end, two wide receivers). …

In other words, not only are the 2021 Patriots structured in such a way that defenses will have to structure a game plan different than for every other opponent they face, they're going to struggle to find the personnel to match up against two tight ends. And it will put an end to the biggest flaw they had over the last couple of seasons: Predictability. Everyone in the stadium knew if they were going to pass or throw last year as soon as they broke the huddle. Or would have, if there as anyone in the stadium. But you get my point.

When the Pats were effectively running a two tight end set, whether it was Gronk opposite Martellus Bennett or Prisoner 24601 or even Dwayne Allen, they dictate what you did. They'd come out in a 7- or 8-man front, force you to put that many big bodies in the box to stop the run, then split them out and attack the mismatches. Or do the opposite; come out in spread, make you go small, motion them in to run block and run at your defensive backs.

And it's worth mentioning two rookie who were invisible last year but by no means should be forgotten about. Devin Asiasi and Dalton Keene were the second and fourth tight ends to come off the draft board, 91st and 101st overall. They were basically redshirted and did next to nothing when they were in there. But the talent is there. Asiasi as the route running "move" TE and Keene in more of the inline, blocking, Y or H-back type. They're not likely to see the field a hell of a lot with all the money invested in Henry and Smith. But with Ds forced to account for the other two, the opportunities should be there when they are sent in. And they represent still more movable parts for keeping opponents off guard.

As a result, the Pats will have less pressure on the wide receivers than they had with zero tight end help the last couple of years. Nelson Agholor and Kendrick Bourne might not be your idea of a great top of the WR depth chart. But they're likely to be good enough for, given that they're at best third and fourth options. Maybe fifth behind James White. And your probable WR3 is Jakobi Meyers, who was good enough to have emerged as their best receiver last year, with a pretty impressive 729 yards on only 347 total passing snaps. And a very respectable passer rating when targeted of 93.7. He's already the kind of precise, smooth, efficient route runner the Patriots value a lot more than high end burner speed:

And it would be stupid to think he won't get better in his third season than he was in his second. Add to that group N'Keal Harry, who's in a produce-or-perish year. And I'm not sleeping on Gunner Olszewski, who at least has a shot of following in the roster bubble guy-turned-special teams stud-turned-slot receiver footprints of Troy Brown, Wes Welker and Julian Edelman before him.

Finally, whenever Mac Jones does take over, and unless Newton starts Week 1 and has them looking like a double-digit wins contender (which will be the dictionary definition of a Champagne Problem if he does), he will, there's another fruit in this smoothie that McDaniels has never had the luxury of: The Run-Pass Option.

From Khari Thompson on Boston.com:

Benjamin Solak of The Draft Network estimates 19 percent of Jones’s pass attempts (around 76 attempts in total) last year were of the RPO variety — one of the highest numbers in the 2021 draft class.

By contrast, Newton ran just 13 RPOs in 2020, which was good for 31st in the league according to Pro Football Reference. Jones almost had that many RPO attempts in Alabama’s semi-final game against Notre Dame alone.

Talent. Scheme versatility. Bucking some NFL trends while being able to utilize some others. Young guys with promise. Some being asked to play smaller roles than they were forced into before. All managed by a coordinator who's been at this a long time and knows how to adapt with the best of them. To repeat, I'm not talking about a return to the best offenses in team history. But given all this, I'll be surprised if they're not Top 7 like they were a couple of years ago. Anyway, last year's debacle - 3 & outs, running down the clock at the end of the half, the most effective weapon they had was the punter - will be nothing but a repressed memory, I can promise you that.