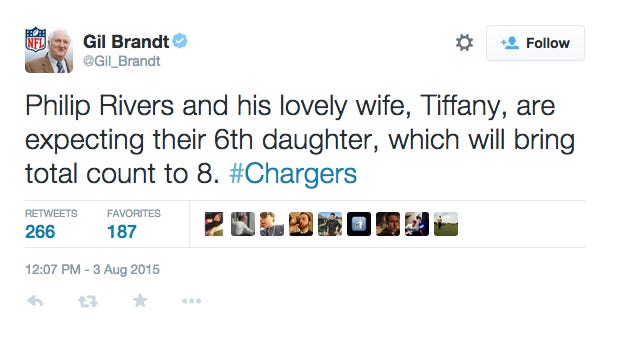 No way. Absolutely not. This is pure insanity. There is no way this man can ever succeed as an NFL QB. He’ll never win. No man with 6 daughters can flourish. 8 fucking kids? 6 girls plus your wife??? 7 goddam females in your life? Not a fucking chance this dude is even slightly normal anymore. I mean I know pro athletes are different than other people. He probably just pays his nanny or team of nannies and he’s on the road smashing out hot chicks and its not like he’s some cube monkey that comes home to a goddam litter of children and a wife that he has to deal with. Still, having SIX DAUGHTERS is not normal. Its not healthy. Its not right. Your brain is just not the same after that. Its like coming back from a tour of duty at war. 6 daughters and you’re just not a normal member of society anymore.

I already got one en route. Round two you cross your fingers for a boy. If another girl comes out though, its a wrap. Its over. Its done. I’m getting my shit snipped and filling my wife with cement. I will be a father of 2 daughters and thats that. Because while the reward of having a boy is certainly nice, it is NOT worth the risk of three daughters. It would be me and Duncan vs. 4 women. No way I can risk that. Now imagine that times 3! 6 daughters, 1 wife, 2 little asshole boys running around. I’m sure Philip Rivers is some sort of Jesus Freak and thinks he’s doing the Lord’s Work by birthing this whole fucking congregation but goddam. Its a good thing he’s a millionaire or he’d have to kill himself.

Pull out for me one time, you bolo tie wearing weirdo.