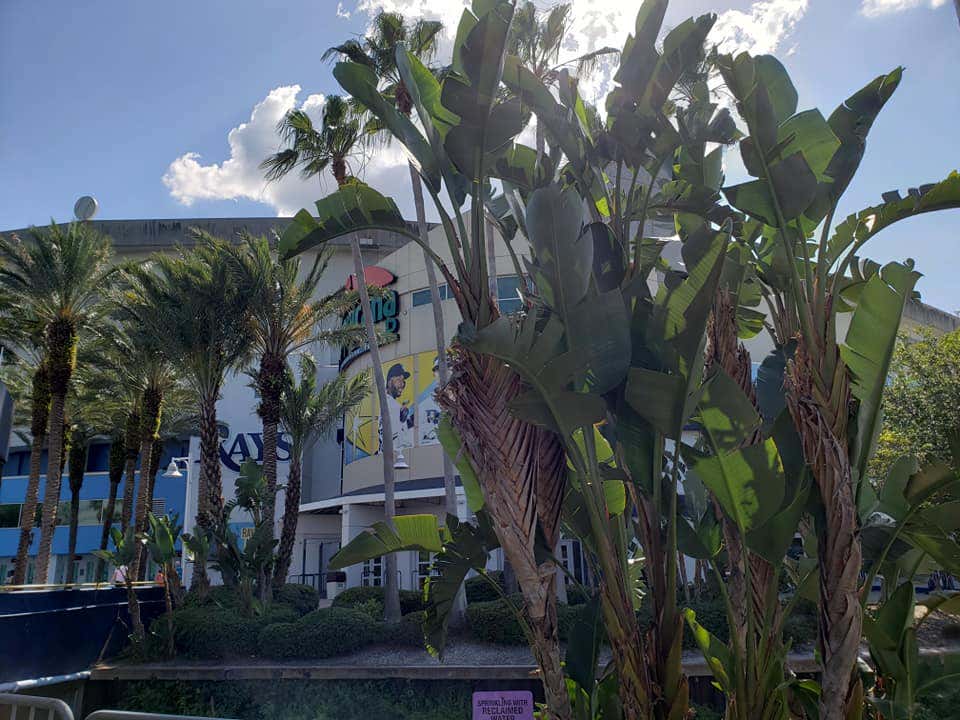 The highlight of the Florida trip was to be a game at Tropicana Field with the New York Mets taking on the Tampa Bay Rays. The tickets were purchased, and they were in a good section at the Trop. We were in a Holliday Inn near Tropicana Field in St. Petersberg, and the day was to include a trip over to Tampa for a Raw Dog episode at the iconic Mel's. However, a trip to Waffle House would cause peril for the entire weekend. 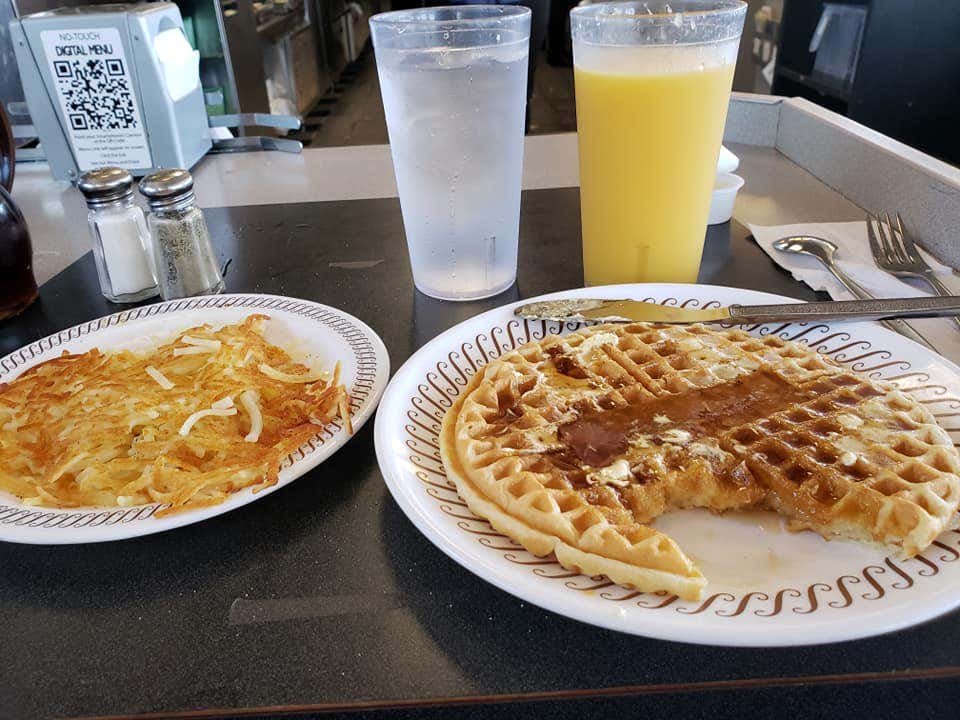 The plan was simple and in place. We would wake up and get breakfast before going out to Tropicana Field for the 1 pm start. The choice for breakfast was an easy one, Waffle House, which is all over the place on Florida's gulf coast. I had never been to a Waffle House as there are none in New Jersey, New York, and Idaho, states where I have spent significant time in. The Waffles were as good as advertised, the bacon was disappointing, and the hash browns were terrible. They tasted like the dehydrated ones you get in a box from Betty Crocker. The one that the box has more taste than the Hash Browns.

After an adequate meal, (sorry Waffle House fans, New Jersey diners are 1000x better), we went back to the hotel to use the facilities and get my hot dog hat for the postgame review. While waiting to go to Tropicana Field, we got a text from Duggs that the food did not agree with him. Being a true man of the south, Coach Duggs had grits with his breakfast, and the thought was the grits were bad, and now Duggs was sick. We assumed he was having the runs and would be alright in a few mins. However, after a half-hour, we needed to check in. Coach Duggs did come down and attempted to go but after sitting in the driver's seat went back up to his hotel room. After another ten minutes, we went up, and Duggs told us to go to the game without him as he continued to struggle with stomach pains. 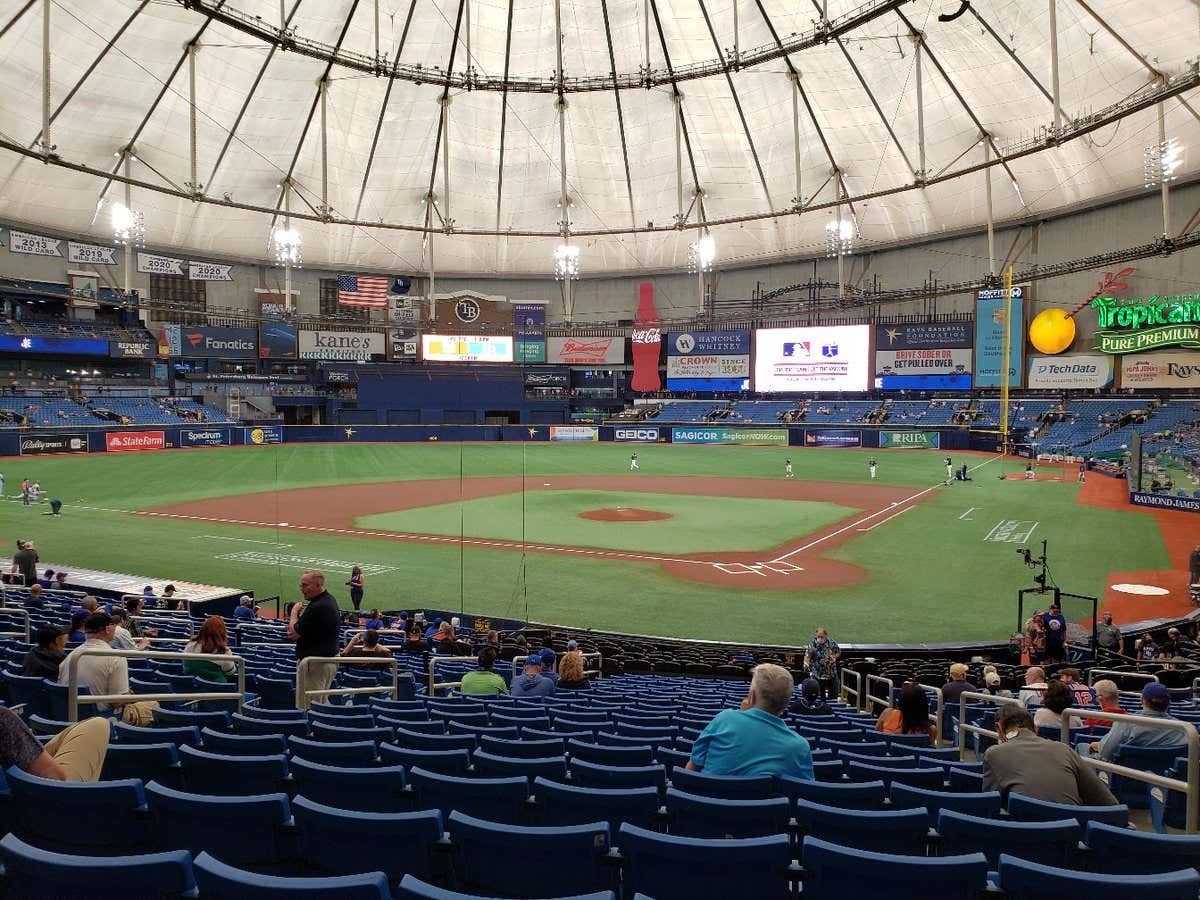 With a man down, I went to the game with T.J., who was there to film it for the blog. The uber ride was quick, as Tropicana Field was just a few miles from the hotel. This was the sixth major league stadium that I have visited and the first not in New York since I went to Fenway Park in 1983. This stadium was even worse than I expected. The concourse has almost a jail feel, as it reminded me of the cellar at the courthouse where the holding cells were. For a dome in Florida, not having sunlight come in is inexcusable. Tropicana Field was originally called the Sun Coast Dome. It was first built in an attempt to lure the Chicago White Sox in 1987. After Tampa failed to land the expansion team that went to Miami, they tried to lure the Giants from San Francisco. However, a last-minute investor kept the team in California, leaving Tampa to attempt again to get an expansion, which they did in 1998 with the Devil Rays.

By the time the Rays began play, Tropicana Field was already obsolete, and the team has suffered since. There is not a bad seat in the house, but there is no charm to the stadium, which inside feels like a Costco. The catwalks often come into a play, but the baseball was surprisingly easy to see against the white translucent roof.  Walking around the stadium, we were disappointed not to see the live mana rays that are in a tank in centerfield. Due to COVID, the Rays are being housed at the aquarium in Tampa, though as TJ quipped, the rays wanted any excuse to get out of Tropicana Field. One thing that was striking was how close the scoreboards to the seats were in the outfield.

Gametime arrived as the Mets and Rays had special uniforms for Armed Forces Day. The Mets saw their seven-game winning streak end the night before as the Rays rallied to win the opener 3-2. The Rays scratched out the first run in the first, but the Mets rallied to take a 4-1 lead with home runs by Jose Peraza and Pete Alonso. Things were going good for the Mets until the fourth inning when the roof caved in catwalks and all. Joey Lucchesi lost command, as Tampa took the lead with five runs. Down 6-4, the Mets scored a run on a Francisco Lindor home run in the eighth, but the Rays scored six more runs to put the game away. The Rays won the game 12-5; I was able to get a hot dog review at the stadium and had three hot dogs delivered by one of the Rays' mascots, DJ Kitty, a fan of the Yak and Tank Thursdays.

Late in the game, I thought it would be a good idea to text Coach Duggs and see how he was feeling, hoping that the bad grits passed through his system. To my horror, he responded he was in the emergency room, and doctors were checking for appendicitis. At this moment, the concern shifted from the game to how was Duggs and what if he needed surgery. Getting back to the hotel became of utmost importance after the game to figure out the next step. We had tickets to fly home from Jacksonville on Monday, and with Duggs' car with another cross Florida road trip planned for Sunday.

As with all games I attend, fans were great, wanting to come up and take photos, among them friends and family of Mets' relieve Sean Reid-Foley. We needed to walk around Tropicana Field to get to the Uber pick-up zone. As we returned to the hotel, we had received good news; Coach Duggs was going to be fine. After being checked out, doctors determined it was kidney stones. He received some pain medications and was cleared to return to the hotel. Sadly missing the game, but feeling much better to continue the weekend.

As we awaited Coach Duggs' return from the hospital, I went for a few laps in the hotel pool. It was a nice refreshing swim on a hot day. With Duggs feeling good, we decided to go for a hot dog review; being it was at night, we needed to find a spot nearby in St. Pete. We found a spot called Engine No. 9, which will be featured in an upcoming Raw Dogging episode. The place was in the heart of the Edge District of St. Petersberg, a happening spot not far from Tropicana Field, which has become the heart of the city's nightlife.

With Coach Duggs feeling better, we went back to the hotel, prepared for the last day in Florida, another day of mini-golf, and a trip back to Jacksonville. Everything was going to be good, even if the Mets were having a weekend to forget in Tampa Bay.