I don't want to speak for PMT, but this kid just stole the Blake of the Year award. There's not a bigger Suns fan in the entire world than this kid and for that reason alone he deserves all the praise. It's not like he had the Steve Nash era, it's not like he had the Barkley era. He's had nothing but garbage basketball. When you're that young and stay dedicated to a franchise like the Suns you deserve to win all the awards, but of course this kid is named Blake. Just a Blake through and through.

I'd kill to have this sort of excitement again. It's hard when you're in your mid-30s. Don't get me wrong, I lose my shit during Kentucky games. But I'm not whipping my shirt off and dancing around. It's mostly just yelling and stomping and fist pumping. And doing this at a game? That's crazy talk. Do you know how expensive it is to go to games these days? You gotta buy the ticket, you gotta buy the food and beer pregame. You gotta spend buy a $14 beer at the stadium. It's a business trip now when I go to games. But Blake here? Not a care in the world except for what happens to his Suns. I miss those days. Speaking of money at the game. Blake here is rocking those big bucks. 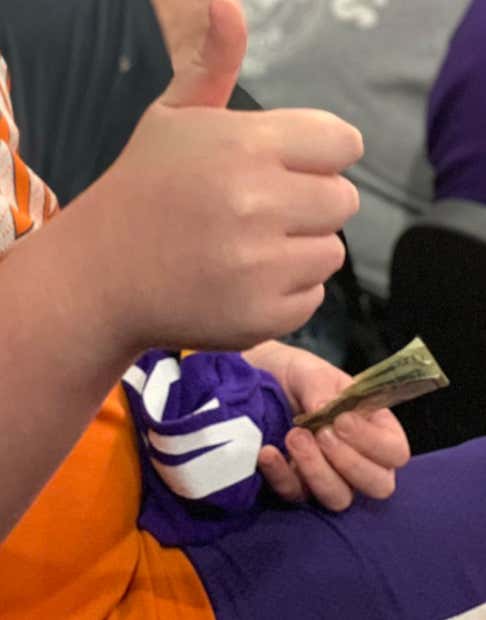 Got himself an extra large soda and a side of cheese with his pretzel with that cash. That's just what Blake does. Suns in 4.