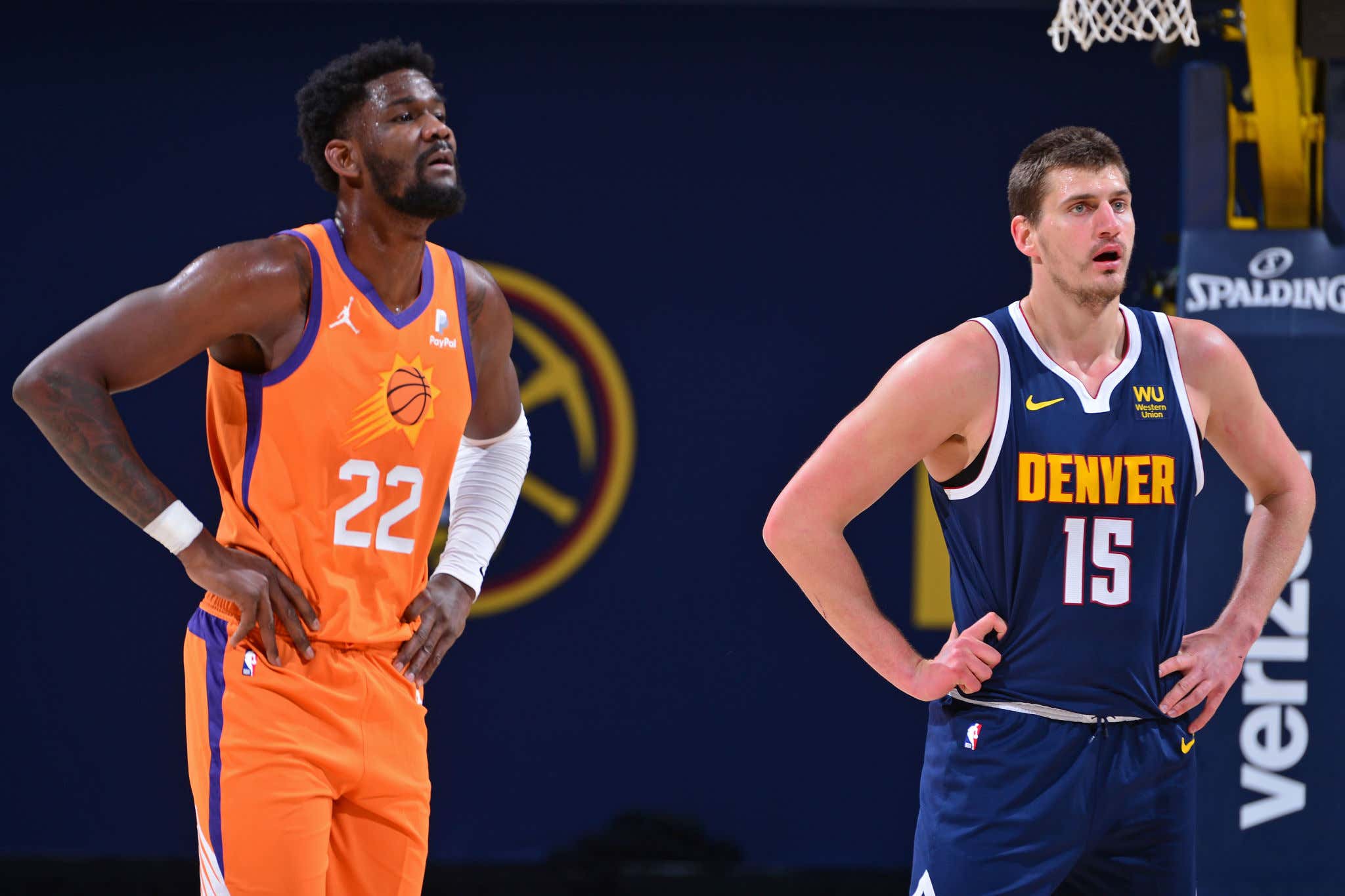 If what we saw this weekend with Round 2 in the Eastern Conference is any indication of what might be in store for the second round in the West, well then get excited. While it sucks that Harden pulled his hammy on basically the first possession and will miss Game 2, the Bucks still couldn't handle Brooklyn. The Hawks went right into Philly and stole homecourt with relative ease. That was supposed to be the weaker conference too. Now that things are settled in the West, we can talk about the big boy conference. I will say, it's pretty great that this season is going to give us a champ that either hasn't reached the top of the mountain since before most of us were born, or for the first time ever

The fact that any team that wins it from the West will be winning their first ever title is both insane and awesome. Especially because those two matchups are the four best teams all year in that conference.

We have our first game tonight with DEN/PHX, so just like we always do let's get you ready for what should be an incredible second round.

If you're a Nuggets fan, I urge you to not read too much into that head to head matchup. These two teams played all three of their games before Feb 1st, and while all three were down to the wire thrillers

The Denver team the Suns will face this time around looks almost nothing like those early games. In their most recent matchup, that double OT thriller, 3 of the 5 starters are either hurt or no longer on the team. The other, Paul Millsap, doesn't even start anymore. There is no Jamal Murray dropping 26/6/5 walking through that door like he did in that third game. So you basically can throw their prior matchups right out the window to some degree. Also, the Suns didn't have Devin Booker for that last game, which seems a little important.

Look at what we just saw in the PHI/ATL series. The Sixers smashed the Hawks in 2 of their 3 meetings, but the Hawks literally did not have their entire starting five. Now they did, and they whooped that ass. The one game ATL won, the Sixers had Embiid but everyone else sat. We're seeing these playoffs are an entirely different beast.

Both teams are going to be facing almost the complete opposite of what they saw in Round 1. For the Nuggets, the biggest question at least for me is how does this team look going up against an actual defense? The Blazers are known for a lot of things, but defense isn't one of them. That is not the case with the Suns. Not only did they have a top 10 defense during the regular season, but they have the 2nd best defense so far these playoffs. The Blazers, were 14th. Everything the Nuggets do obviously revolves around Jokic, and this is what he had to say about a certain matchup that you might find interesting

While this is nice to say and Jokic is giving proper respect to his opponent, he did average 25.7/13.7/8.3 on 50/50% splits against Ayton this season. That's decent. At the same time, Ayton certainly held his own with 22/12 on 70% shooting against Jokic. Their styles are so different with Jokic able to score at all three levels and Ayton being more of a traditional back to the basket/score around the rim big. I do wonder how Jokic's ability to draw Ayton away from the rim will help, that's not something we really saw in the Lakers series.

It's unfortunate that Will Barton is still out and won't play in Game 1 because the Nuggets are going to need all the offensive firepower they can find. I highly doubt that they'll have a 122.9 Ortg in this series like they did against POR. When your playoff life sneaky depends on Austin Rivers' three point shooting, that can get dicey. The Suns do have some versatile wing defenders they can throw at guys like MPJ and some good guard depth, but what I do know is these Nuggets may have the most mental toughness of any team in the playoffs. Having the MVP helps, but you can't really break this team. They never panic it seems. If they are able to get similar bench production from guys like Monte Morris, we should have a great series on our hands.

For the Suns, as we know they go as Devin Booker and Chris Paul go. To say that Devin Booker has changed the narrative around being just a good stats/bad team guy to a legit stud would be an understatement. I'm just not sure how the Nuggets will match up defensively. Chris Paul is going to get whatever he wants against someone like Campazzo. I wouldn't feel great about guys like Rivers/MPJ/Green trying to stay with Booker. Which brings me to Aaron Gordon. This series is a great example of why they traded for him. He at least gives them some perimeter versatility and size to try and stay with Booker. I'm just not sure it matters who you put on Devin Booker right now. You basically have to just pray he misses at this point.

Much like Clippers, Bucks, Sixers, and Nets, nobody really gives a shit what the Jazz did during the regular season. Doesn't matter that they were wire to wire the best team in basketball. Doesn't matter that they are deep as shit, well coached, and have elite star talent. Until they prove it in the playoffs with a deep run, none of it will matter. Beating the Grizzlies in 5 games doesn't prove dick either.

I'd say this presents itself as a quality test for the Jazz. A fellow title contender, elite two way talent, decent depth, and a solid coach. This is a series where I think it's fair to say the Jazz won't have the best player on the floor. While you may think of the Jazz as a more defensive oriented team (3rd best defense), what I'm looking at in this series is the shooting. Both sides are ridiculous when it comes to shooting the basketball.  During the regular season the Jazz led the NBA in 16.7 3PM a night. The Clippers were 6th at 14.4. At the same time, it was LAC that led the league in 3P% at 41.1%, the Jazz coming in at 4th at 38.9%.

So far these playoffs, the Jazz are picking right up where they left off, making 16.8 on 40.6%. Obviously that was against the Grizzlies, so it's not crazy to suggest a much better perimeter defensive team in LAC could bring that down a little. The one thing that has given the Jazz problems this year are defenses that can switch with ease, guys that can hold their own in isolation, and lineups that have five legit shooters on the floor at all times. The Clippers in theory do check all those boxes.

The thing is, the Clippers never really do what we expect them to do. Sure they won Game 7 against DAL, but the fact that it even went that far was a bit of a surprise. We've also never seen the Jazz come through against an elite opponent as the favorite. Maybe they can do it, we just haven't seen it yet. If Donovan Mitchell is healthy they have as good as chance as any, but I do wonder if the Clippers are going to be able to throw out lineups that basically make Gobert a non factor. Go super small with Morris at the 5 or something.

What's interesting about these two teams is for the entire season, they get up by 10 points and it's a wrap for you. The Jazz were 39-7 in those games, the Clippers 31-7. Those are easily the two best records in the entire league. You find a way to build a double digit lead, it's very hard for either team to overcome it. That's what happens when you have elite shooting combined with elite defense. We could very well see these games be decided by a single 8-0 run or some shit. It's been hard to gauge who these Clippers are since they load managed the entire season and then couldn't win at home to save their lives, while the Jazz have been utterly dominant since the start of the year.

There's a legit chance that the winner of this series has punched their ticket to the NBA Finals, which brings even more juice to this matchup. Either way as a fan, we can't really lose. Either we get to slander the Clippers for choking again and not making the WCF, or we get to make fun of the Jazz for being the most dominant team all year only to once again come up short in the playoffs. Here's to hoping it goes 7.

So there you have it. Round 2 in the Western Conference should be everything we want it to be and more. The final 4 teams are just so goddamn good, and have been all year. Add in that all 4 teams are looking for their first ever title, and this is shaping up to be one hell of a round.