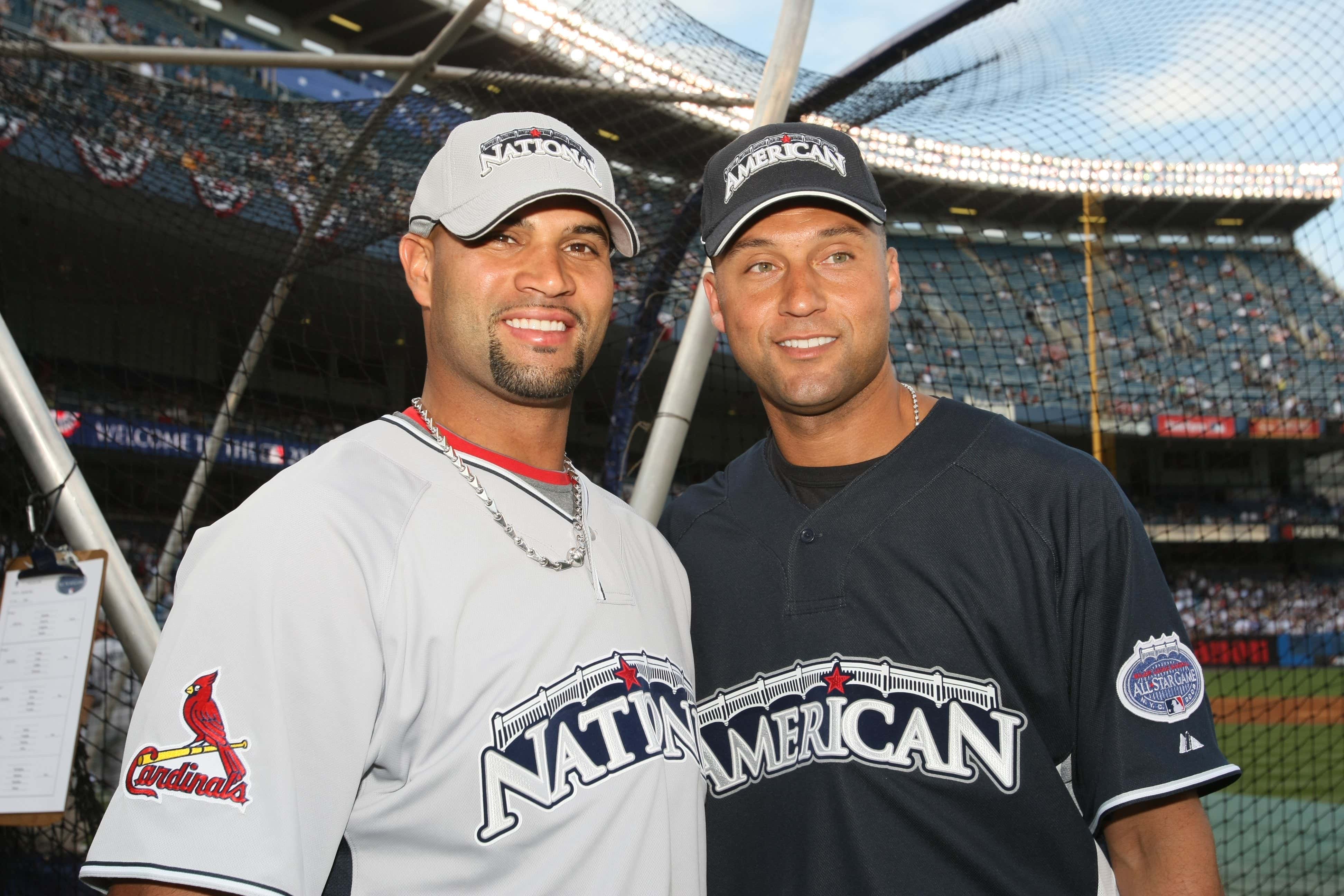 Happy Saturday everone! I just came off making my hosting Picks Central debut yesterday and as I was preparing I was brainstorming some discussion topics that I thought would be good to end the show with and get the listeners thinking and engaged. My weird dumb brain went in a million different directions and ended up on picking my all 2000-present baseball team, lineup and rotation. There were some positions that were no brained, easy picks and some that I had to sit and make some decisions on. I dope deep into the timelines, longevity, production and accolades of all the players I was considering and in my humble opinion put together one hell of a baseball team. Here it is position by position and my rotation. This team would never lose.

Catcher was one of the tougher positions to choose but I’m very confident in my choice here. He’s got a Rookie of the Year Award, 1 MVP, 3 WS Titles, 1 batting title and a career .302 batting average with almost as many homers as Yadi Molina in way less games played.

Some may think this is a homer pick but I actually hate him after his departure from the Yankees to the desolate Mariners. I know for damn sure he regretted that decisions. Anyways, the guy had an 8 year stretch from 2010-2017 where he averaged .303, 27 homers and 99 RBI’s from the middle infield. He also played one hell of a second base. Career .303 average with 2,624 hits and 334 homers and an 8x All-Star.

Another no brainer here. People love to make the argument he’s overrated because they just want to hate on the Yankees. Guess what people, no one hates a loser, only a winner. If you have a problem with this pick suck my dick. This team is beating your team if Jeter ain’t on it. Post 2000 the captain was a 12x All-Star, 2 WS titles including a WS MVP to go along with a .310 batting average and 3,465 hits.

Outfield you can go a lot of different directions but I’ll gladly take one of the great leadoff hitters of all-time and have the rest of my murderers row of hitters drive him in every time he gets on base. 10x All-Star, Rookie of the Year, 1 MVP, 2 batting titles, 1 stolen bases title and the MLB record for most hits in a season that still stands today. He also had a .311 career average and over 3,000 hits even though he didn’t join the major leagues until his late 20s.

The best player in baseball essentially since he stepped foot on a major league diamond. Truely elite at all 5 tools of the game. 8 time All-Star, Rookie of the Year, 3x MVP, 1 RBI title, 1 SB title, .306 career average and 310 homers in less than 10 seasons in the big leagues. Gotta have Mike Trout on the squad.

Don’t care that he took “allegedly” took steroids, the guy won 4 straight MVPs during this century and is the all-time HR king. Not only is he on the team but he’s batting cleanup. Post 2000 he still made 6 All-Star games, 4 MVPs, 2 HR titles and a batting title.

As a Yankee fan it brings up a ton of bad memories but this team would have no integrity if Big Papi wasn’t the DH. One of the most clutch hitters of all time. 10x All-Star, 3 RBI titles, 1 HR title, 3 WS titles, 1 WS MVP and 541 career HRs

Miggy is basically the honorable mention at 1B and DH but I made a utility because I felt he was too good to not be on this list. 11x All-Star, 2 MVPs, 4 batting titles, 2 HR titles, 2 RBI titles, 1 WS title and the last person to win the triple crow. His 2012 season was one of the best seasons in all of baseball. He has to be on the squad.

The Big Unit definitely had a lot of his best years in the 90s, but the fact that he won 3 straight Cy Young Awards in the 2000s is more then enough to get a spot in my rotation. Post 2000 he won 3 Cy Youngs, Led the league in Ks 4 times, led the league in ERA 2 times, WS title and WS MVP, and won a Pithing triple crown in 2002 giving him one of the better pitching years of all time.

As much as he’s gotten shit about some of his postseason woes he still firmly has a spot in the all 21st Century rotation imo. He’s an 8x All-Star with 3 Cy Youngs, 1 MVP, led the league in Ks 3x, led the league in wins 3x and led the league in ERA 5 times. He also won a pitching triple crown in 2011, WS title in 2020 and has a 2.46 career ERA. Gimme Kershaw all day long.

Not only does he have a smoking hot wife with big juicy funbags, He’s absolutely been one of the most dominant pitchers of this century. He has 226 wins, 8 time All-Star, 1 MVP, 2 Cy Youngs, Rookie of the Year, 1 WS title, led the league in wins 3 times, led the league in Ks 5 times, Led the league in ERA once in a year he won the pitching triple crown.

One of the most under appreciated pitchers of all time. 8x All-Star, 2 Cy Youngs, and 2x wins leader. Had to have Roy Halladay in my starting rotation. RIP.

Another guy who I really didn’t wanna put on this list because I despise the scumbag Red Sox but even though he had a lot of his best years in the 90s he still did more than enough in the 2000s to earn a spot here. Post 2000 he made 4 All-Star games, 1 Cy Young, led the league in Ks twice and ERA three times and won a WS. Not many better than peak Pedro.

Who else could you possibly choose here? The best closer/relief pitcher of all time bar none. When Sandman came and you saw 42 come out of the bullpen it was game over. That cutter has collect more broken bats than some cemeteries have collected bodies. He had some phenomenal stats pre 2000 but even Post 2000 he was a 11x All-Star, 2x WS champ, 2x saves leader, 4x reliever of the year, Comeback player of the year And the all-time saves leader in the history of Major League Baseball.