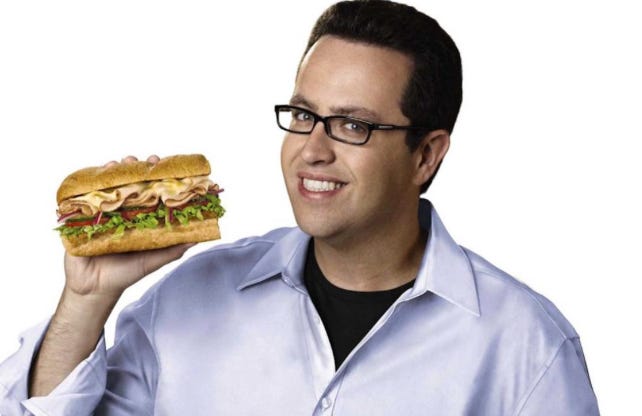 (Source) Former Subway spokesman Jared Fogleallegedly claimed to have paid a 16-year-old girl $100 for sex, according to an affidavit Business Insider says the Federal Bureau of Investigation subpoenaed. Court documents cite a series of text messages between Fogle and a former female Subway franchisee, Insider reports. However, the FBI has not confirmed there is an open case, according to Wendy Osborne, special agent and spokeswoman for Indianapolis office for the FBI.

“The FBI has no new information to release regarding this matter,” Osborne said. “The only thing we confirmed several weeks ago was that the FBI was conducting investigative activity in the Zionsville, Indiana, area.” Business Insider said in the article that it “independently verified the authenticity of the affidavit.” “We also verified that a phone number in the document was registered to a Jared Fogle,” the publication added.

Subway took to Facebook on August 1 writing, “About the most recent news story on Jared Fogle, this allegation, if true, is appalling and is contrary to the values of our brand. As previously stated, we have suspended our relationship with Jared.” In an emailed statement on Monday Subway added, “We have no record that this alleged complaint was ever brought to our attention. Had it been, we would have taken immediate action.” In the alleged conversations, Fogle asked the teen to advertise herself on Craigslist for sex with other men, Insider reports.

She reportedly responds to one text saying, “Is this the same website you found that 16-year-old girl that you f***ed … I still can’t believe you only paid $100 for her.’’ Fogle allegedly says, “It was amazing,” according to Insider.   Subway suspended its relationship with Fogle in July after FBI officials and Indiana State Police searched his home two months after an associate’s arrest on child pornography charges. Fogle has not been charged with any crime. During the search, the FBI, police and U.S. Postal Service obtained documents, electronics and other items from Fogle’s Zionsville, Indiana, home.

Look at Jared The Subway Guy, what a horndog this guy is huh? And can I say even though this is teetering on the edge of being pretty fucked up (the age of consent in Indiana is 16 so I’m not sure it was illegal but it’s most definitely creepy as hell) I feel like Subway not sticking by their man is a big mistake. 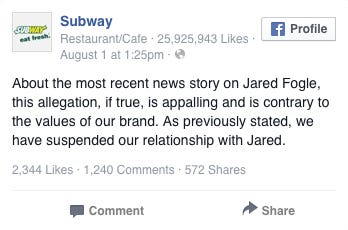 You’re Subway, you don’t have good food, no one actually says to themselves, oh yeah, I’m really craving some Subway. So why not re-brand yourself as the outlaw sandwich shop. 16 year old fuck fests on Craigslist, weirdo spokesmen who are Indiana royalty and somehow the most famous person in the State, all of it. Because if we’re being honest here, 5 dollar footlongs were brilliant but now you need something new. Don’t be the lame food company that falls into the health craze of 2015, zag when everyone else zigs. Subway, home of sandwiches sold to you by the guy who allegedly fucks 16 year old’s off Craiglist. “It was amazing” -Jared Fogle. 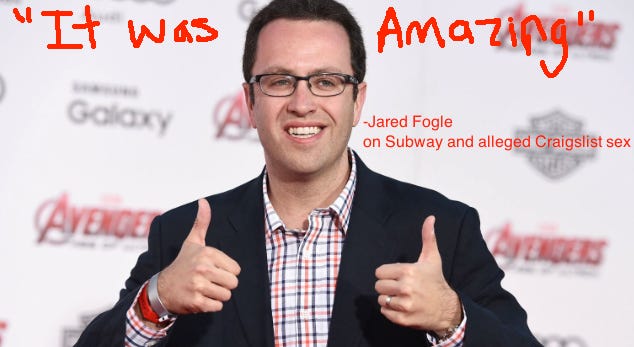 Did I just reinvent Subway’s entire marketing campaign? I think I did.