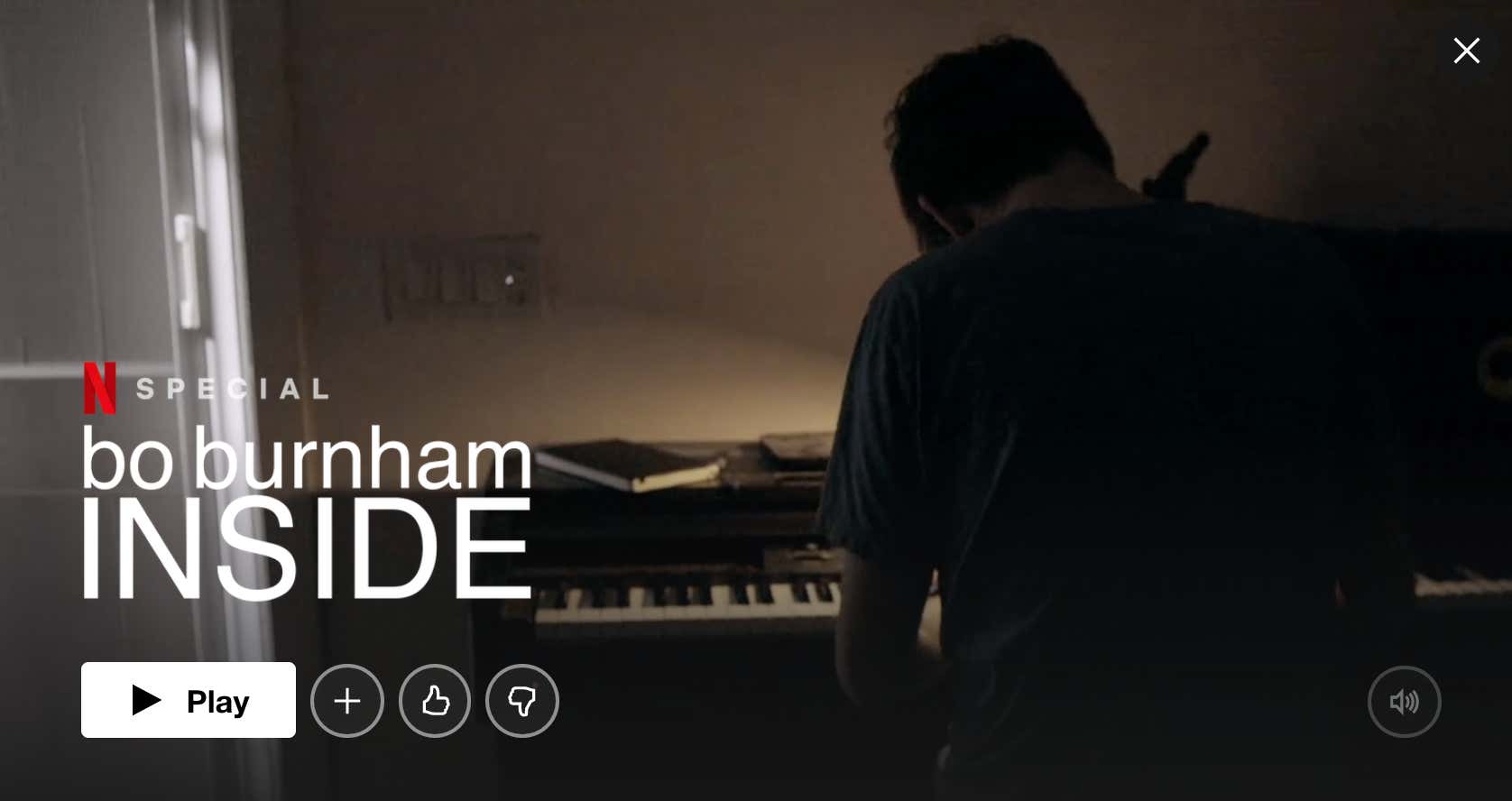 Bo Burnham's first comedy special in five years hit Netflix over the weekend. "Inside" is a completely solo project from Burnham that he wrote, performed, filmed, edited, and directed all himself. There's no audience, and it was all shot from inside his house throughout the course of the pandemic. It's a mix of "stand-up" (which feels weird to say when there's no audience), sketches, and original songs.

For those that don't know, Burnham has severe mental health problems and hasn't performed on stage in five years because he used to get panic attacks in the middle of performing and couldn't put up with it it anymore. At the end of his last special, "Make Happy," he tells the audience "I hope you're happy" and then leaves the stage and hasn't returned since. He's had other projects since then like "Eighth Grade" and "Promising Young Woman" but this is his return to stand-up.

Personally, I think he nailed it, and it was one of the most unique specials I've ever seen. The jokes were good, the editing was awesome, the songs are catchy and a few are even bangers. I think he deserves a lot of credit for putting it all together himself. Comedians are always trying and re-trying different material at open mics before figuring out their best hour for a special. Burnham was completely isolated and had no audience to judge feedback from, which makes it even more impressive.

Now, I will say that it wasn't completely perfect, and there are times where I don't love all things Bo Burnham. I think sometimes playing the whole "It's so hard to be a comedian in today's climate" card can be overplayed. And he does have a tendency to at times be a bit pretentious and act like his comedy is smarter, better, and more important than everyone else's. But sometimes comedy can just be comedy. You can make funny jokes about things. Not every joke or set has to try making a deeper point about the meaning of society and life. HOWEVER, there is a point in the special where Bo does acknowledge his tendency to do this. He's self-aware about it, but then clarifies that being self-aware doesn't absolve people of the things they're self-aware about. It was just an interesting look inside his brain. He has such a fascinating relationship with his audience where you can tell he sort of resents and appreciates them at the same time.

And the thing is, he then did prove that it is still very possible to do comedy in "today's climate" and made funny, topical songs about everything from FaceTiming your mom, to sexting, to what girls post on Instagram. There were some misses, but pretty much all his songs were funny, catchy, relatable, and some of them were just straight up bops. The "Eyes On Me" song should be blasting in nightclubs this weekend.

Getting to mix in a few sketches and behind-the-scenes footage also added to it. My personal favorite was the reaction video Inception he had going on. You have to wonder if this could spark a change where more comedians start doing specials like this where they can include sketches and things other than them just standing on stage telling jokes to an audience.

Anyway, I'm going to wrap this blog up because it's not like I'm some stand-up comedy critic or aficionado, but I have always been intrigued by Bo Burnham. I think his entire career has been fascinating to watch. And it's crazy to think this man we see now was once posting silly 6 second Vines. He has this complex relationship with what it means to be an entertainer/performer, and I personally can't take my eyes off it. This special might not be for everyone, but it's such a unique viewing experience that I think it's worth a watch.

Also I really hope we can get the full soundtrack from the album on Spotify.

In the meantime, here are some of his older hits.