You'll have to forgive me for deeming the first Patriots practice in front of the media - a light workout conducted in shells and shorts - as being somehow blogworthy.

Actually, you'll have to do no such thing. I apologize for nothing. After the year we're just getting over and an offseason unlike any other in the 60 years of this franchise's existence, you're goddamned right I'm excited by the very idea that the 2021 Patriots - some combination of the returning veterans, free agent signings, draft picks, core players coming back from the Covid opt out - are taking the next step on the road back to dynastic dominance. I'm not going to compare it to Christmas. But it's not a stretch to say it's the like the day after Halloween, when you wake up from your sugar coma and start putting your list to Santa together. Besides, this time last year was all about Tom Brady holding his own private, mask-free workouts with his new teammates while those of us in Maskachusetts were living in a police state and watching our favorite bars and restaurants go out of business. So I'm going to exercise my Old Balls privilege and post about this. Because I need it. Mentally, emotionally and spiritually.

By way of full disclosure, I was not in Foxboro today. Press passes are limited, but I'll be there in person for one of the upcoming practices. Anything I say here is based on the reporting of others. In no particular order of importance:

Mac Jones is your QB2 at the moment.

In a move that comes as a shock to virtually no living being, Cam Newton took first reps in all the individual and team drills, with Mac Jones following him. That might come as a disappointment to anyone who can't repress the memory of Newton's six starts with fewer than 125 passing yards and his three benchings. But Belichick meant it after the draft when he said "Cam is our starter." For now at least. If Jones came to camp carrying Mjolnir and could summon thunder and fly through space to other realms, he'd still be carrying veterans' equipment and get his head shaved at training camp. If he wants the starting job, he's going to have to take it. A sentiment that Belichick more or less confirmed meeting with the media:

So far, Jones looks like someone who could take the QB1 job.

I'll not sit here and allow myself to be accused of getting overheated about a guy throwing balls to undefended targets in a routine passing drill. The 9-to-5 workplaces of America are filled with former athletes who looked good in their first practices and never amounted to jack squat. I'm just reporting that the reports are that he throws a nice pass, is all. While acknowledging what we all knew months ago: Jones is not an imposing physical specimen:

The policy of giving draft picks numbers in the 50s continues. 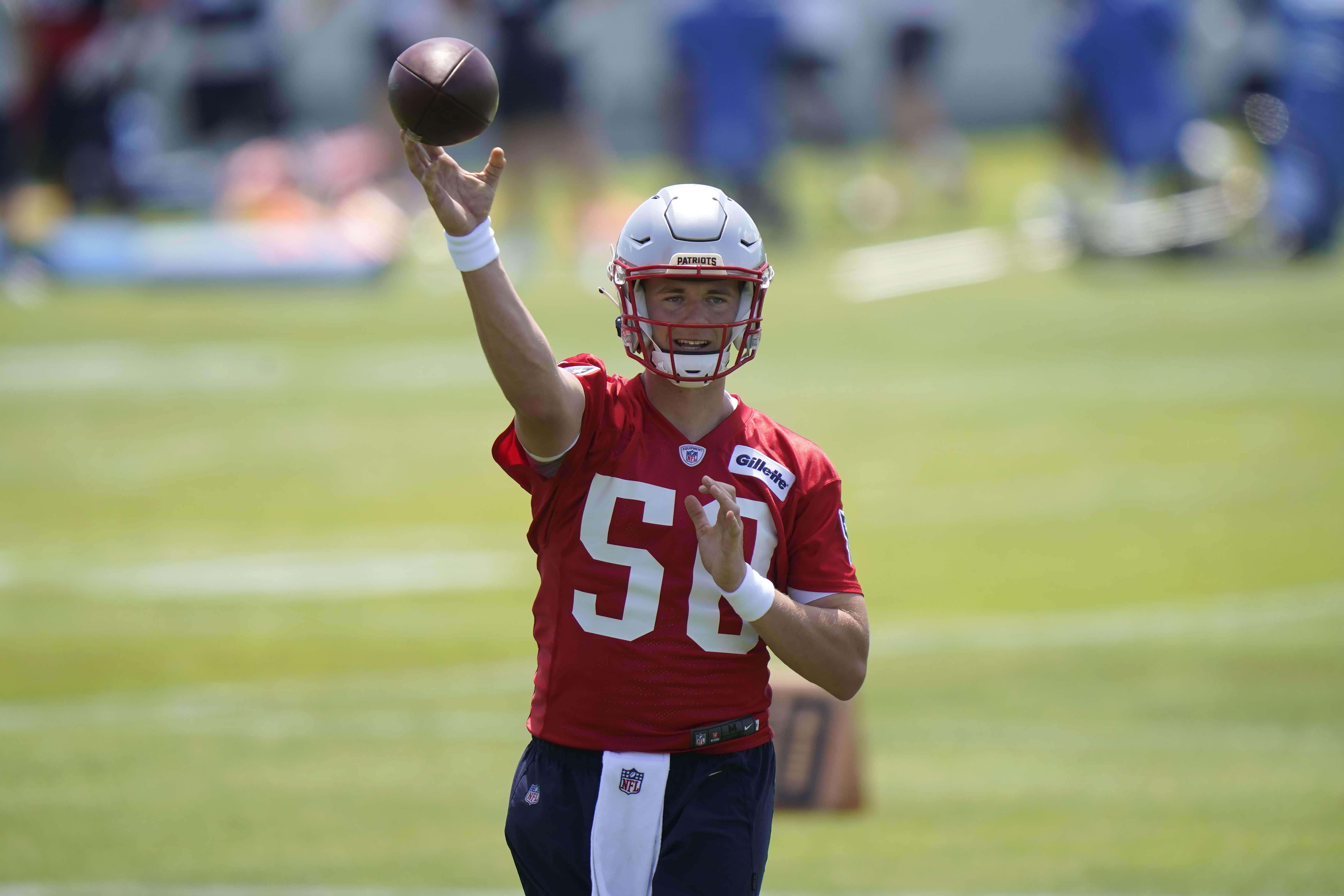 Belichick tried not using numbers at all until well into practice season, in order to force his players to learn each other's names. But the league - stop me if you've heard this before - considered that to be a form of cheating. Like all the wins in January and February could be directly traced back to this team building experiment in May. So at some point he just gave the No. 1 pick 50, the second pick 51 and so on. It makes you work harder just to follow practice as you keep wondering why all these linebacker are playing out of position. But if it bothers one person in NFL even a tiny, infinitesimal amount, it's worth it.

Ernie Adams is still on the job.

When the International Man of Mystery selected UCF wideout Tre Nixon with the 242nd pick, that was his last NFL draft. Not his last day on the job.

And one returning member of Belichick's Jedi Council looks like he hasn't worked off his Freshman Coaching Job 15 quite yet. 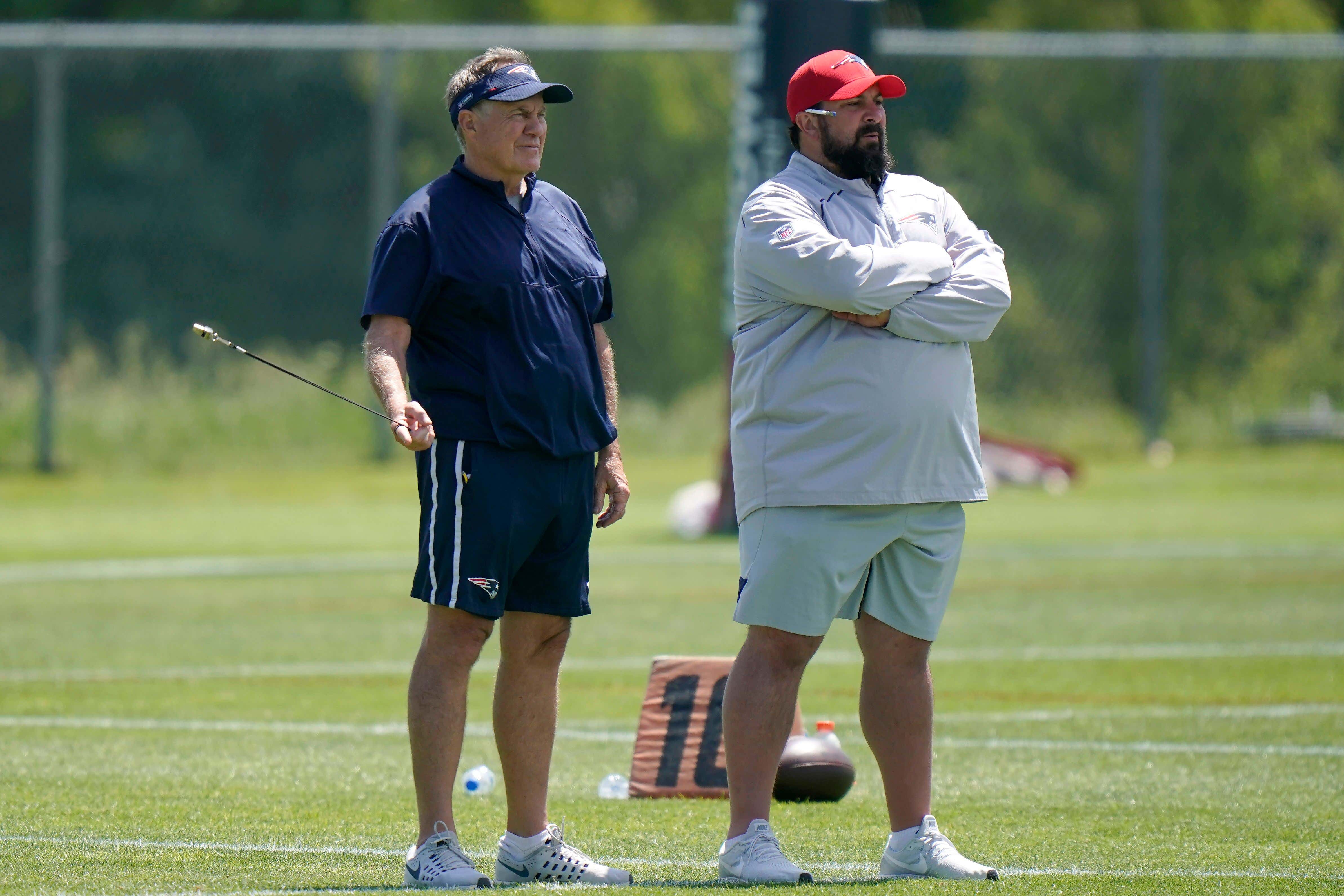 But then, it's always a good move to keep someone around that you look better than. Women have been pulling that move for generations and it works every time.

Not everyone was at this voluntary workout.

Though one cornerstone players showed up, he just didn't dress:

Belichick was asked specifically about Hightower and gave the expectedly vague non-answer. But the fact he was there instead of home watching "Mare of Easttown" is all we need to know about what his plans for the season are.

Long before we had an understanding of who would show up, either in Foxboro or an any of the other 31 OTAs going on about now, we had Ben Volin. What can I say? The man has a gift. He can create a storm of negativity out of nothing the way Ernie Adams can use his secret weather machine to make it snow in Gillette.

And all this from just the first workout open to reports. The 2021 season is going to be an epic tale from beginning to end. Gird your loins.