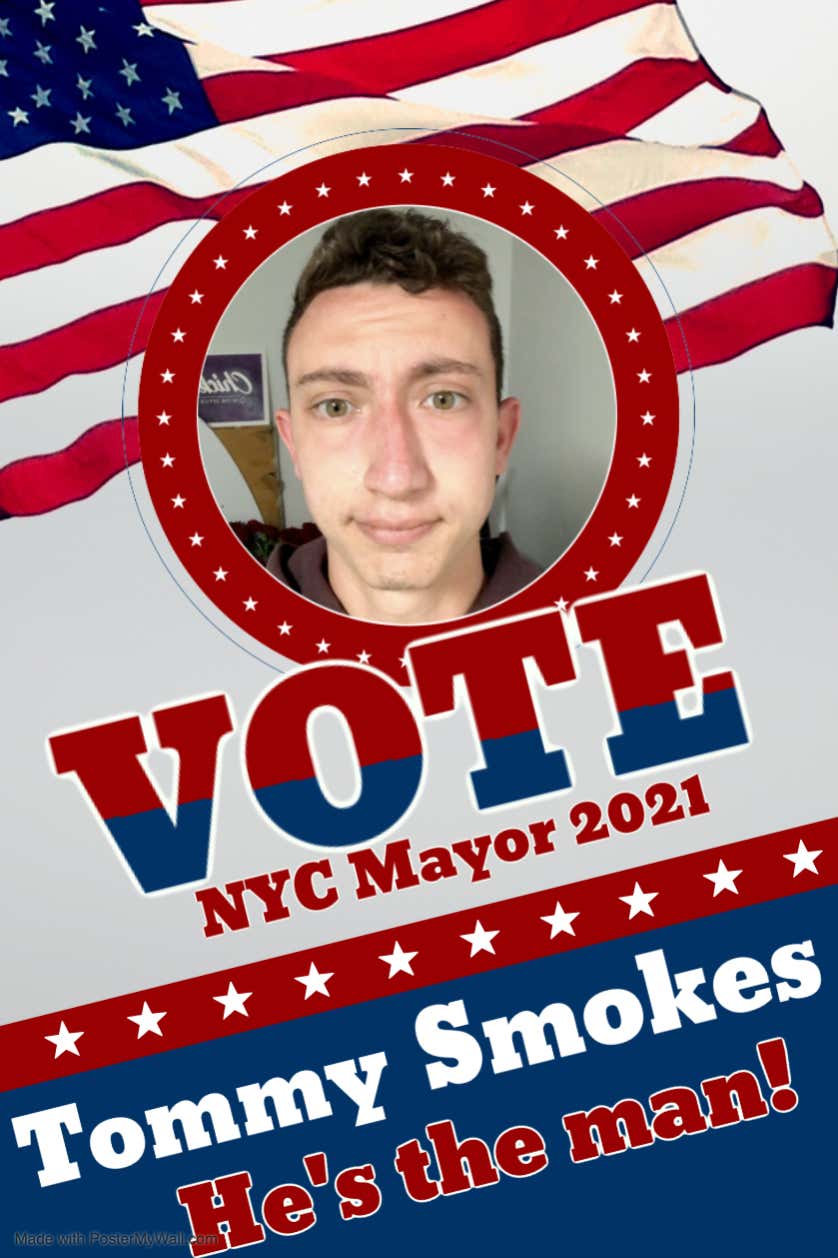 The New York City mayoral race is heating up. I see what feels like at least 10 commercials a day from the different candidates, and it’s seemingly every day that Andrew Yang is saying something that leaves everyone scratching their heads.

I think every single person in NYC, regardless of their political affiliation, agrees that Bill De Blasio has been the worst mayor in perhaps the history of politics, leading to a ton of people throwing their hats in the ring. And to be honest with you? I’m feeling a little bit left out.

I don’t think I’d necessarily want to be mayor. Barstool is a way more fun job. If I could somehow maintain both, then perhaps I’d consider it. But I really just want to get in on the action of running. Make a few commercials. Get in the debates. Have articles written about me. People tweeting #TommyForMayor and things of that nature.

So I started to think about what my platform and policies would be if I decide to run, or even win. This is what I came up with.

I would also allow casinos to open up in New York City with a strip that rivals Vegas and shits on Atlantic City. I haven’t decided exactly where this will be, but I have a few possible locations in mind. Times Square is probably too congested as is. I’m thinking maybe Union Square. Some current buildings will have to go to make room for the casinos, but we’ll give them money or some shit like that. Cross that bridge when we get to it. For now, let’s just imagine we figure out the logistics and there’s like 6 different casinos surrounding Union Square.

Paper straws are one of the worst inventions in modern history. There’s nothing worse than going to a place and getting a paper straw served with your drink. In my New York City, we will stick to plastic straws and plastic straws only. I would rather the Earth go extinct than have to use paper straws.

There’s a perception about Manhattan that you can pretty much go from any Point A to Point B by taking the subways. And while this is somewhat true, non-New Yorkers would be surprised to learn how hard it can be to get from the east to west side of the island using subways. You can do it on 14th and 42nd street, but everything between that is a dead zone. And being that I live, work, and go out in this range, adding some subways here would greatly benefit my life. And that’s really why I’d want to be mayor. To make my life easier and more convenient.

This is a real policy and one that came into effect during the pandemic, but may be here to stay. Well, I’m going to make sure it’s here to stay for good. The vibes in the city are amazing with the streets lined with tables and people enjoying their nights outside. It’s actually crazy that this never happened sooner. There’s really no downside at all to it except maybe it clogs up like a bike lane or something? Well that brings me to my next point.

I initially had this written down as “No More Cyclists” but I decided that might be cruel and unfair. And while I will certainly have dictator tendencies, I don’t want to be a complete monster. (I also don’t want to endure the severe hate from the cyclist video that Feitelberg did a few years ago after he too shared his disdain for them). So Citibikes, bike lanes, etc. can all stay, but changes are coming. If these monsters are going to ride in the streets, then they must obey the same traffic laws that cars do. Stop at stop signs. Stop at red lights. Let pedestrians have the right away, etc. Too many of these people are maniacs and think the entire world revolves around their bike ride. So cyclists can stay, as long as they know that they could be staring prison in the face with one wrong move.

Like I said, the dictator tendencies will certainly be there. One of the main reasons I’d want to run for mayor is all the new followers, so should I actually win it’s only logical that this becomes a requirement. I will enlist a task force that goes around the city and makes people whip their phones out and show proof of following. Jail time if not.

I love the warm weather. Unfortunately, New York is cold with shitty weather for about half the year. No more of that. Now how will I make it warmer? Well it won’t be easy, but I’m thinking we start an environmental task force dedicated to speeding along the process of global warming. No more recycling. Chop down a few trees. Throw some styrofoam into the soil. Use a ton of electricity. I’d have to talk to the experts on this, but the bottom line is that I do want it to be warmer out and will stop at nothing to make that happen. Imagine how much better NYC would be if it had San Diego weather all the time? I’m trying to make that happen for you guys.

(As long as I am invested in it). So Bitcoin, Ethereum, Hogecoin, Safemoon, and any other cryptos I decide to dip my toes in will have to be accepted by all stores, restaurants, the government, etc. And yes, I will absolutely accept bribes if necessary.

My NFT Selfies Get Displayed in Times Square

I will take one huge digital billboard in Times Square and dedicate it strictly to displaying my new NFT selfie every single day. I will likely have to increase the supply from one of one as the new demand will be incredibly high.

Remove the Mets From City

I will not be one of these frauds like DeBlasio who wears the hat of every single team in the city. I hate the Mets. No place for them in Tommy’s New York. We will be a one team city. I won’t force people to be Yankee fans, but it will be strongly encouraged and you may get a tax break if you are.

I Get To Go On Survivor

I’m not sure exactly how me being the mayor of New York City can get this accomplished, but I’ll do what I can to ensure it does. Again, while I do want to help the city of New York blah blah blah, me being mayor would undoubtedly benefit myself more than it would anyone else.

This is always a hot button issue, so sure, I’ll get more jobs for people. Between the anti-environmental task force and the "make sure people are following Tommy on social media" task force, there's a decent amount of new jobs right there.

And last but not least, this is honestly a minor thing and barely worth mentioning, but anyone who doesn't vote for me and anybody who speaks bad about me will be publicly beheaded.

Anyone, that about sums it up #TommyForMayor2021