You may recall my newest friend and recent interview guest, the lovely and talented Real Mrs. Poindexter, sometimes know by her secret identity, Crystal Jackson. But if you need a refresher, she is the mom who's children were expelled from their private Catholic school because a very small contingent of school parents found her OnlyFans account and would not shut up about it. Even after the administration said it was not a school matter and none of their concern. Eventually they capitulated to the angry, wealthy, privileged Karen and He-Karen who could could not keep their noses out of Crystal's business.

Here she is talking about the situation and how her OnlyFans subscriptions exploded after I wrote about it. Come for her side of the story, stay for her telling how this other couple also enjoys sticking their noses into one another's private areas when they're drenched in steak sauce. Because nobody has secrets in the Real Housewives world in which we live.

Well it's been a few weeks, but Crystal and I have stayed in touch. And she just shared with me that Barstool readers, her OnlyFans subscribers and kinky, judgmental buttinskis who throw rocks from the glass houses they live in aren't the only ones obsessed with what she's up to. So, it would appear, is the government of the United States of America. Specifically, the Office of the Director of National Intelligence, which describes itself as overseeing "the U.S. Intelligence Community and serves as principal adviser to the President on intelligence issues."

And here they are at work. Standing their post. Manning (and womanning) the ramparts so that the rest of us can sleep peaceably in our beds at night: 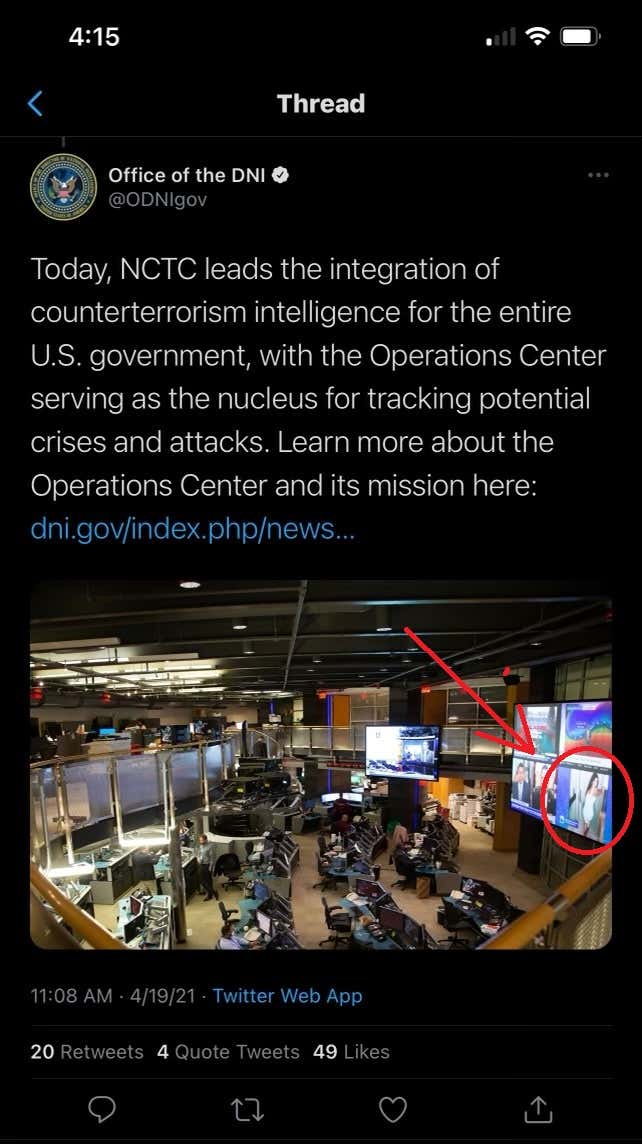 That would be this photo:

OK. Good to know. We've got a national intelligence apparatus that is capable of monitoring threats from around the globe, international conflicts, unstable governments, terror cells, cybercrimes, enemies both foreign and domestic, and still have time to keep tabs on the comings and goings of a fun-loving, uninhibited California MILF. Sure, they might miss the occasional hack into a vital piece of our energy infrastructure that shuts down our supply line and causes major shortages and spiraling prices. But nobody's perfect. And after doing all that intelligizing and counter-intelligizing all day long, you need something that's easy on the eyes.

I'm sure the Office of the DNI would point out that this was simply them monitoring the news networks and Crystal Jackson just happened to show up at that particular moment. But there's no need for such explanations. We all appreciate what these patriots in the intelligence community go through to keep us safe every, single day. Our enemies never rest, so neither can they. If all they can get for a little R&R is to monitor the latest on hot Catholic moms, there's not a man, woman or child among us who would begrudge them that. They've earned the right to ease the tension with a little eye candy in the form of one of OnlyFans sexiest women. In fact, it wouldn't surprise me if my girl offered them a 30-day free trial subscription. It's a small price to pay for the free publicity. She did it for me, and I'm not out there stopping World War III every day like the DNI.