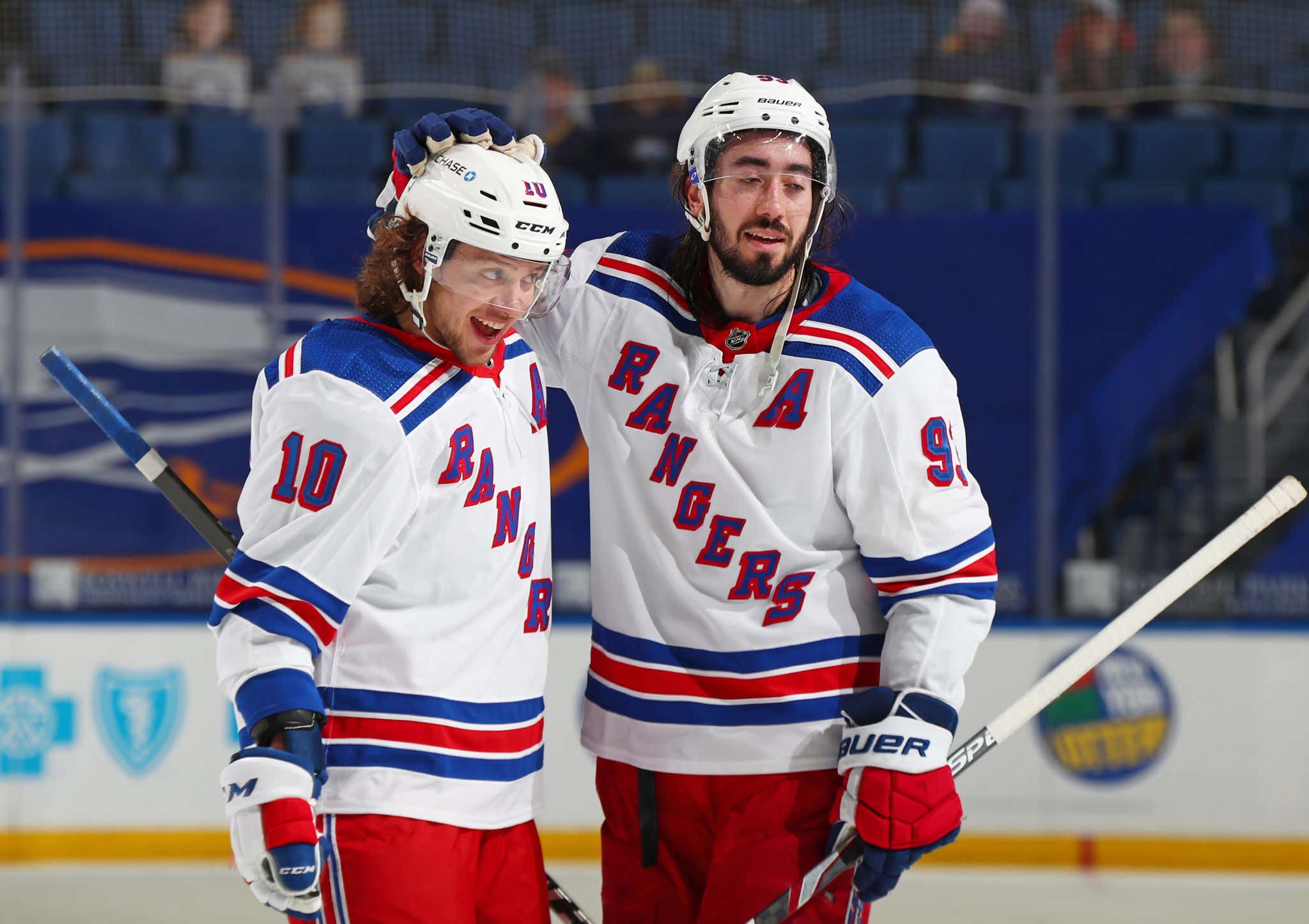 Who did it better?@Avalanche Landeskog-MacKinnon-Rantanen
WOI vs STL at ES

There's a lot of uncertainly in Rangerstown right now. No coach. New GM. No real feel of exactly what type of on-ice personnel changes are coming in the wake of an organizational upheaval. The one certainty though is that the bar for next season is set at playoffs or bust - and two exemplary squads who easily coasted through their first-round matchups have a glaring thing in common.

The top trios in Boston and Colorado certainly aren't carbon copies of each other. The Perfection Line is older, smaller, more savvy & defensively sound. The Avs line is more dynamic & so offensively dominant they rarely see any d-zone time. Both are equally as unstoppable though, easily averaging 3 points/game as a unit while doing major damage on the power play. Obviously these teams have solid depth behind their stars but there's no question the key to their success rests in being able to roll a line for a third of every game that opponents seldom, if ever, have an answer for.

So why can't the Rangers have one too? Panarin and Zibanejad have posted the same gaudy numbers over the last two seasons (2.49 PPG combined) as Marchand/Pasta (2.48) and MacKinnon/Rantanen (2.49) without being on the same line at even strength. I understand the idea of splitting the two for offensive balance - and it's worked - but I wouldn't be at all surprised if the next coach takes a different approach, trusts all the young talent to provide supplementary scoring & loads up a monster top line. The question is who gets the honor of playing alongside the Breadman & Zib to truly make it a three-headed monster. Lafreniere? Maybe in another year or two - but I'm only looking at this upcoming "playoffs or die" campaign. Buchnevich? Probably the best option after coming off what projects to 73 points over an 82-game season. That's no fun though. Sure it'd be a very solid two-way line but I'm talking elite firepower. I wanna go shopping.

After the assumed DeAngelo buyout, new GM Chris Drury will have ~$23.5M of cap space available. Shesterkin, Buch & Chytil will eat a significant chunk of that but we can still conservatively say the Rangers will be left with ~$9M to play with. They don't want to tie up that money long-term though so that takes them out of making a UFA splash in a pool that's light on "super line" talent anyway. So who's got a year left on a deal with a squad most likely looking to make a move that could fit the mold?

The Pipe Dream: Matthew Tkachuk. The odds of the Flames moving this kid are virtually zero - but there's no question this organization is looking to shake things up after missing the postseason for the third time in six years. Even when they've made it, excluding last year's qualifying round, they're a combined 3-12 in three first-round exits. So maybe there's a .000001% they go nuclear and Tkachuk would undoubtedly net them the biggest haul. The 23 year-old has a year left at $7M before entering his final RFA year and if he somehow ended up a Ranger, it'd be for the long haul. No one fits what the Blueshirts are looking for better than Tkachuk and no team has the assets (think similar to an Eichel deal) to make it worth the Flames while. Fun to imagine, but don't hold your breath.

The Reality: Johnny Gaudreau. I know, I know. The former Lady Byng winner is the polar opposite of Tkachuk and makes Panarin look like Chara. Doesn't exactly answer all those "toughness" criticisms. Think about it though. He's got one year left at $6.75M. A year away from securing the biggest bag of his career. One I'd have to think he'll be looking to cash in elsewhere with the immediate Flames future looking "meh". Johnny Hockey is two Covid-affected seasons removed from piling up a 36/63/99 line, going point for point with MacKinnon. Imagine this type of offensive talent boosted by a move back home (he's a Jersey kid), skating next to Panarin & Zibanejad…in a contract year!

With Calgary's captain & top blueliner Mark Giordano turning 38 entering the last year of his deal, Gaudreau could probably be had for something like a first & Robertson if he doesn't strike an extension this offseason. Not much more than what you'd expect to cough up on deadline day so why not make the move early? I'm sure some fans might not want a rental keeping a kid from top-six minutes and prime PP time, but again - it's playoffs or bust. Clearly the team's priority is winning over developing so there's no room for "let's see how this kid does here". Adding a stud like Gaudreau keeps pressure off the kids for one more season. Provides a line that can score with the best in the league while allowing for depth and balance throughout the rest of the lineup.

Listen, there's no realistic way to address the "grit" and "toughness" concerns overnight. Part of it involves kids like Laf, Kakko, Kravtsov & Barron physically maturing and getting used to the NHL game. Part of it involves a new coach implementing a structure that forces his squad to play a persistent, relentless skating style that's difficult for opponents to handle. A "Tom Wilson deterrent" isn't what this team should be focusing on and I don't want to give up a kid's spot in the lineup just so there's a guy on the bench who's good at dirty hits & punching faces.

Three of the least physical teams this season were the Avalanche, Wild & Maple Leafs. Why? Because their talent prevails. No, the Rangers are not the Avalanche in terms of talent but they're well on their way. Rantanen didn't break out until he was 21. MacKinnon didn't explode until he was 22. If Kakko & Lafreniere are on similar trajectories then they've still got another year or two. So why not use some rare cap space, add immediate talent and buy those kids another year before the Rangers have to lean on them? And who says they can't bust out while playing in the middle six anyway?

Get Gaudreau. Make a super line. Play a "normal" season. Make the playoffs. Get the kids some valuable postseason experience before aiming to be true contenders in 2022-23.