Good God. I knew Killer Whales could jump, but I didn't know they could jump that high. Look at this thing... 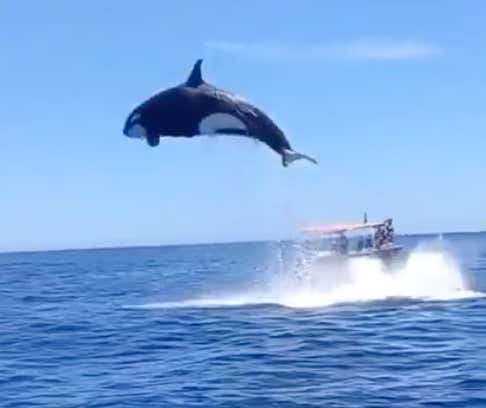 What do you think? Fifteen, twenty feet? Mind you Orcas are 12,000 pounds so the amount of thrust it must've taken to get that thing out of the water is incredible. Regardless, I have no idea what the those boaters are doing hanging around there. Did they not see Blackfish? Do they now know how easy it would be for one of those whales to drag them into the water? The lack of fear is astounding. There are tons of crazy videos online of people interacting with Orcas too. Look at this shit…

It's only a matter of time until someone either A) gets eaten or B) gets squashed to death. Thank God that wasn't the case here. That said, RIP to the dolphin- there's no way it made it out of there alive. Now take it away, Willy…