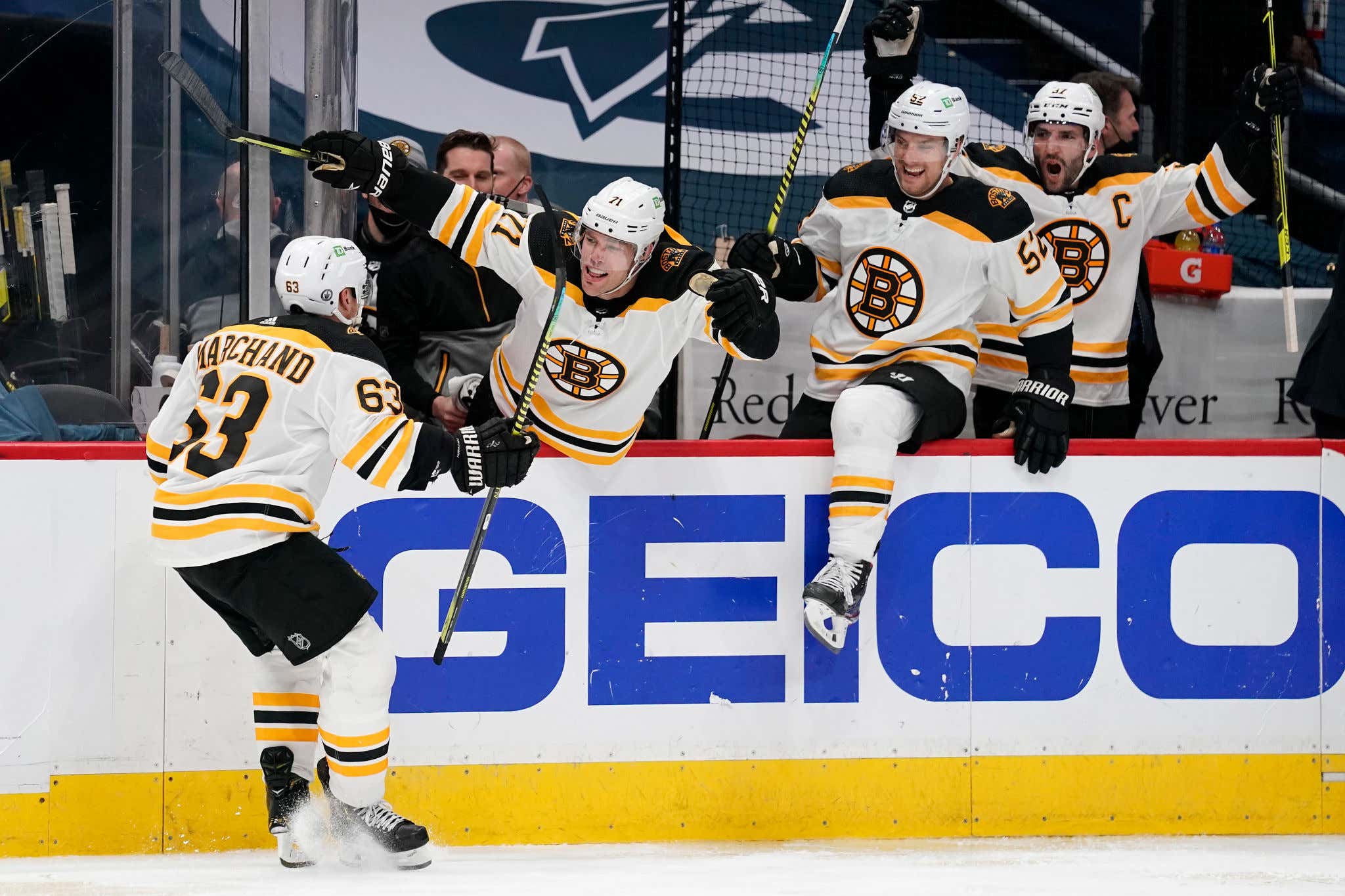 Game 2 hero? Brad Marchand. Taylor Hall scored a greasy goal late in the 3rd to send it to OT and Brad Marchand made it a series by scoring just 39 seconds into OT. WE'VE GOT A TIED SERIES FOLKS. Here's how we got here.

TJ Oshie tied things up shortly after on the PP with David Pastrnak in the box for hooking. 1-1.

Patrice Bergeron sniped one from the high slot to re-gain the lead for the Bruins. Great play by Pastrnak to bat the puck down from Orlov's attempt to clear. 2-1.

Late in the 1st the Bruins went on the PP after Nic Dowd threw David Krejci in a headlock. B's spent just a minute on the PP before Brad Marchand was called for a roughing penalty of his own. Got mugged in a scrum and retaliated.

With 3:18 left in the 1st the Capitals tied things up once again, shot from Dmitry Orlov trickled through after being redirected by Garnet Hathaway's skate. 2-2. Tough goal to give up late in the 1st.

Taylor Hall drew a tripping penalty on John Carlson, his 3rd drawn penalty of the series. Some good looks for the B's just could not capitalize.

Connor Clifton trips up Tom Wilson but Wilson embellished, leading to some 4 on 4 hockey.

And then Nick Jensen and Craig Smith both sent the box for roughing. What a BATTLE.

Early in the 3rd Nick Ritchie took a roughing penalty catching TJ Oshie up high with a butt end.

Bruins went right back to the kill after Taylor Hall gets caught tripping Connor Sheary. 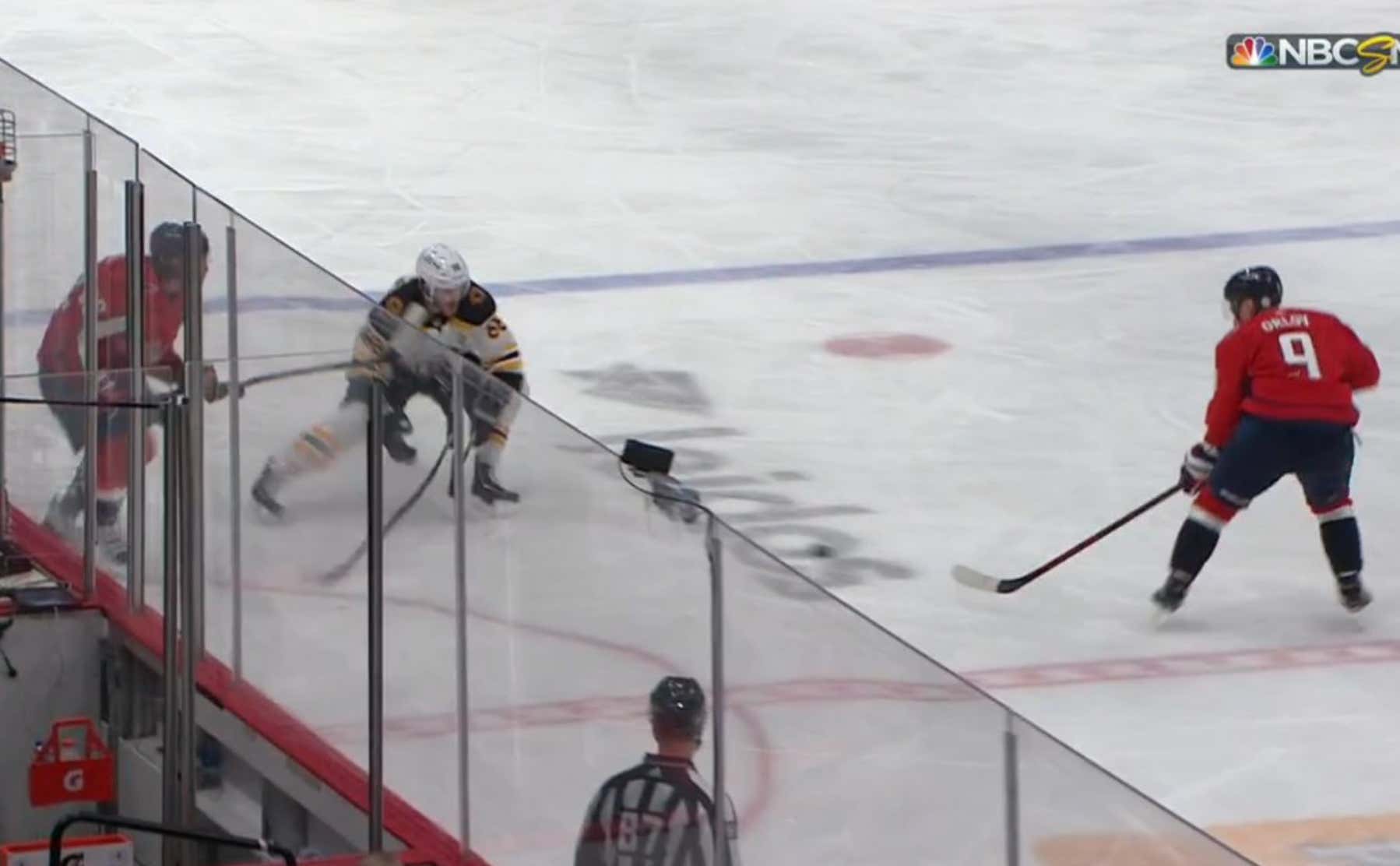 No idea what Kevan Miller was doing pinching there.

With less than 4 minutes to go in the 3rd.. Taylor Hall amidst a massive scrum buries one to tie the game and send it to OT. 3-3.

David Krejci with the keep in, Matt Grzelcyk with the feed and Brad Marchand with the goal 39 seconds into OT. Bruins win 4-3.

- Connor Clifton replaced Jeremy Lauzon in the lineup tonight for the B's (hand). Sean Kuraly slid down to the fourth line, Charlie Coyle back as 3C, Jake DeBrusk on the right side.

- As expected, physical start to the game. Bodies were flying everywhere.

- 2 games, 2 goals for Jake DeBrusk. Didn't have a great season, but I said it once and I'll say it again, you can rewrite your season in the playoffs.

- Speaking of penalties, the B's simply cannot put the Caps on the PP where they can do damage. Feels like it's almost automatic for them. If B's want to win this series they need to stay 5 on 5.

- Different look for the Bruins on PP1, with McAvoy and Krejci.

- The Top Line was held off the scoresheet in Game 1 but arrived in Game 2. Patrice Bergeron with an absolute snipe on Craig Anderson in the first. Pasta made it all happen batting the puck out of the air. The Captain gets his first goal of the series. Brad Marchand with the OT winner. More on him later.

- David Pastrnak missed a couple of Grade A chances.. he's SO close to converting.

- Felt like Charlie McAvoy was everywhere on the ice tonight. The man is doing it all for the B's.

- TOO MANY shot opportunities being passed up. Jesus Christ it was like I was sitting in the 300s on my couch yelling SHOOT like a drunk fellow.

- Lars Eller did not finish the game for the Capitals. Lower body injury.

- Curtis Lazar got absolutely yeeted by Tom Wilson into the B's bench.

- Bruins defense? Not great. Looked like literal garbage tonight. No one had a worst night than Kevan Miller though. Not sure if he was playing through injury or what, he was just a turnover machine. He was injured on his only shift in the first but would return to the bench with a minute left in the first. We'll see.

- Taylor Hall is a Boston Bruin. A greasy goal to send the Bruins to OT, but acknowledges he still has another level he can get to. I think the 2nd line overall can be better. They'll get some more chances in Boston with the last change to have try and get a good match up vs. the Caps.

- Craig Anderson held his own for the Capitals tonight. Was shaky at first but settled in. Gave the Bruins fits. Made 44 of 48 saves. Granted, the Bruins made him look like an elite vezina winning goalie at times.

- Tuukka Rask gave the Bruins a chance to win, one goal he'd like to have back but he finished the night with 36 saves. Was under siege early in the game and kept the B's in it.

- Brad Marchand the Game 2 OT hero. What a feed from Matt Grzlecyk and what a goal. He was hurting the team by taking some penalties earlier in the game, but Bruce Cassidy said the good outweighed the bad tonight and boy was that a massive goal. HUGE.

Was it pretty? No. But the Bruins could not go down 2-0, just couldn't do it. B's going back to Boston with a DC split. Game 3 at TD Garden on Wednesday night. We've got a series, folks.

I think I blacked out.