Welcome to Pardon My Take Rivalry Week inside Stool Streams Stadium. Our 51st broadcast today should be a fun one, as we have three table tennis matches consisting of familiar faces all across the board. Fortunately, we had someone successfully go 6-for-6 on the Play Barstool app in last week's Cornhole broadcast and cashed in on $2,000. That means the Progressive Jackpot resets at $500 today, and the money could be yours by the time our broadcast is complete. Let's break down each match below and give you the best chance to win some money.

Storylines: Our first match today is a battle between players who have similar playing styles. Hubbs is known for his backhand, while PFT has the best serve in the office (when it is on). Hubbs is coming off his first career win after the tough 0-10 start, but he is much better than his record indicates. PFT knows that and will not be taking this match lightly.

Quotes to Remember: "It's been a while since I played, but I definitely can go to sleep with a loss not on my mind." - Hubbs

"You can tell he fights demons, if he can overcome voices inside his head, he's got a shot." - PFT 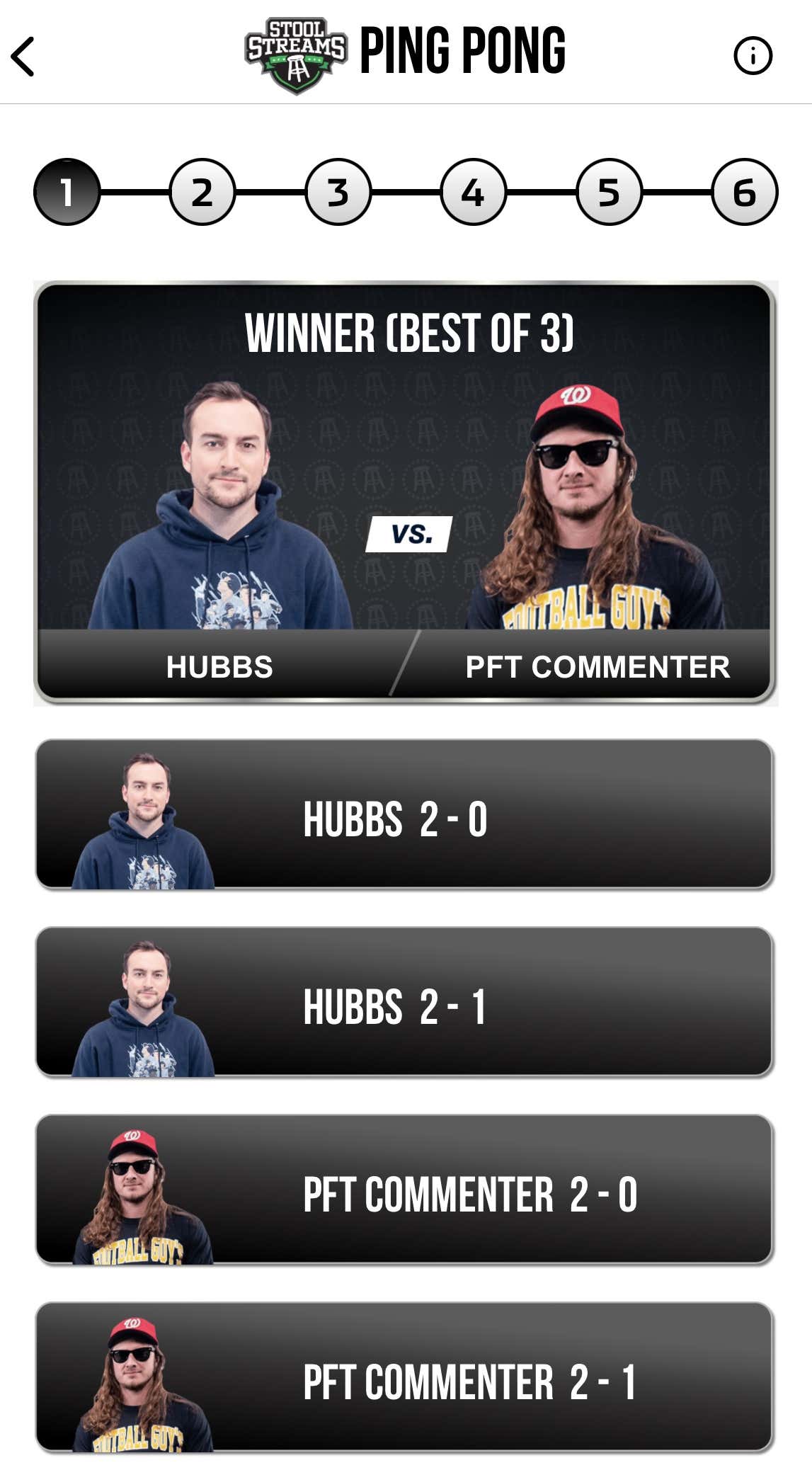 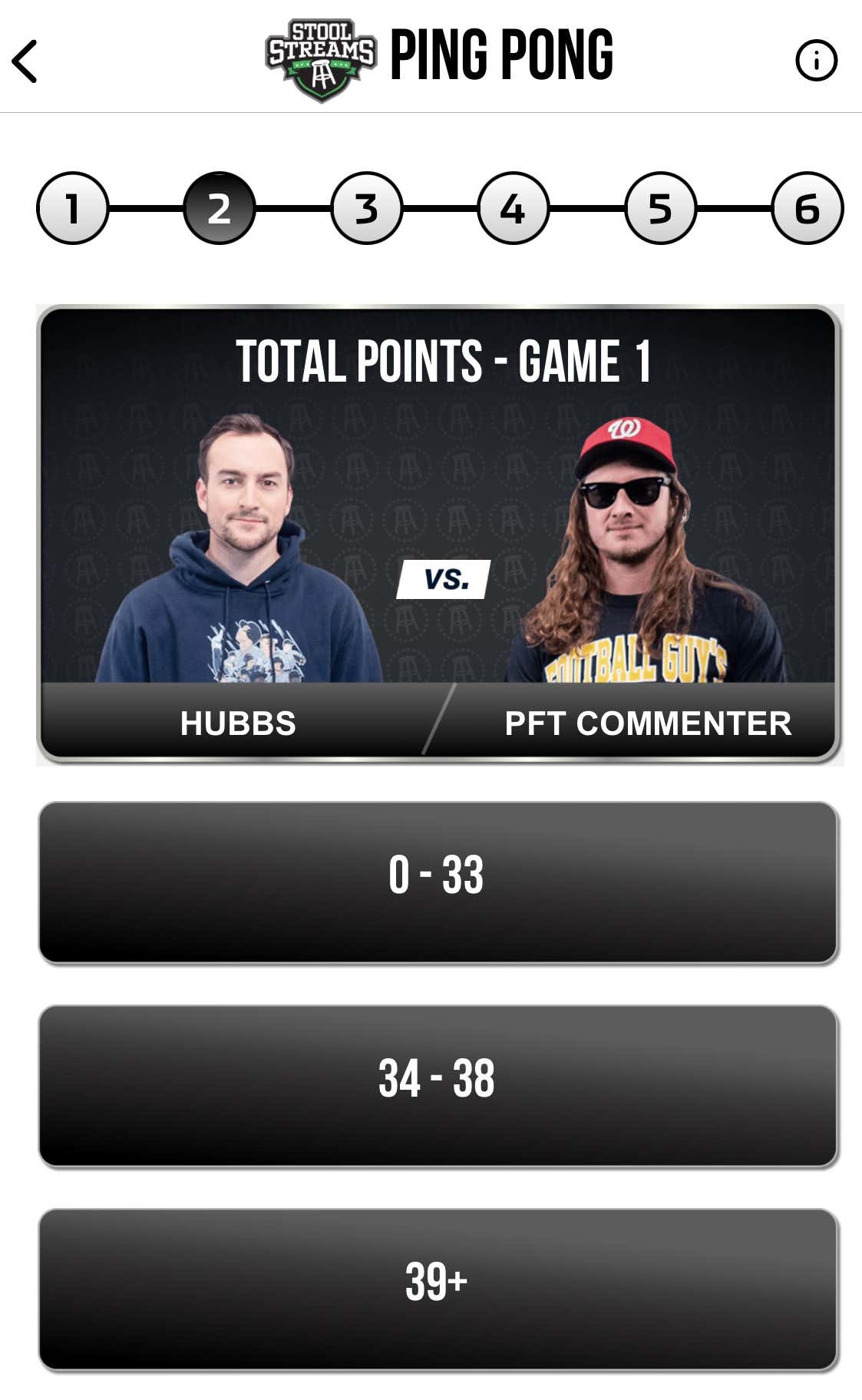 Storylines: The longest lasting rivalry in the history of Stool Streams adds another chapter to it today, when PFT and Hank go at it in our middle match. The last time the two of them played, it was actually PFT who impressed many and swept Hank in early April. Does Hank get revenge for that on the table today? It will definitely be an exciting battle.

Quotes to Remember: "I just hope that Hank can escape this match with at least a shred of dignity." - PFT

"I don’t even remember the last match, it got away from me quickly. I'm ready to go and locked in." -Hank 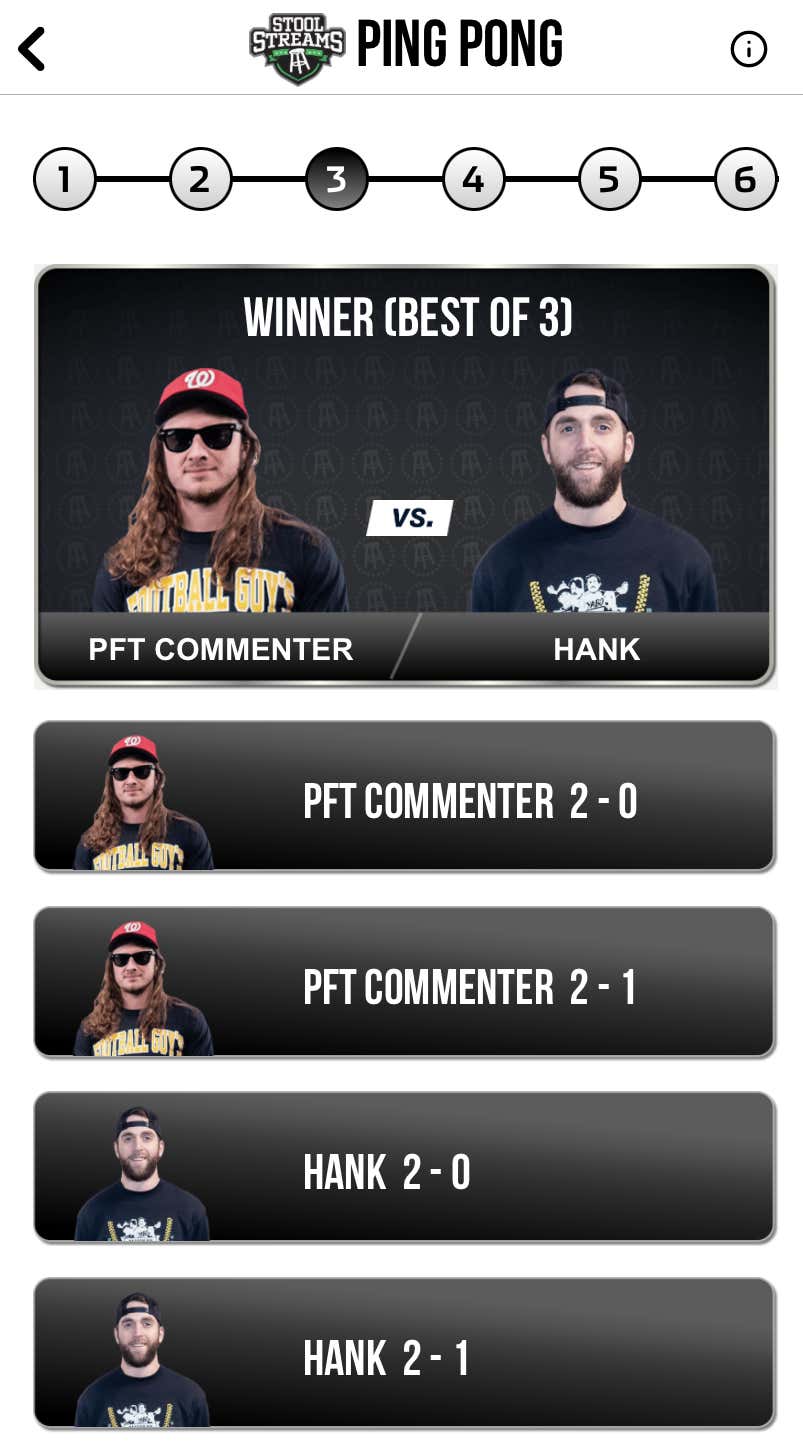 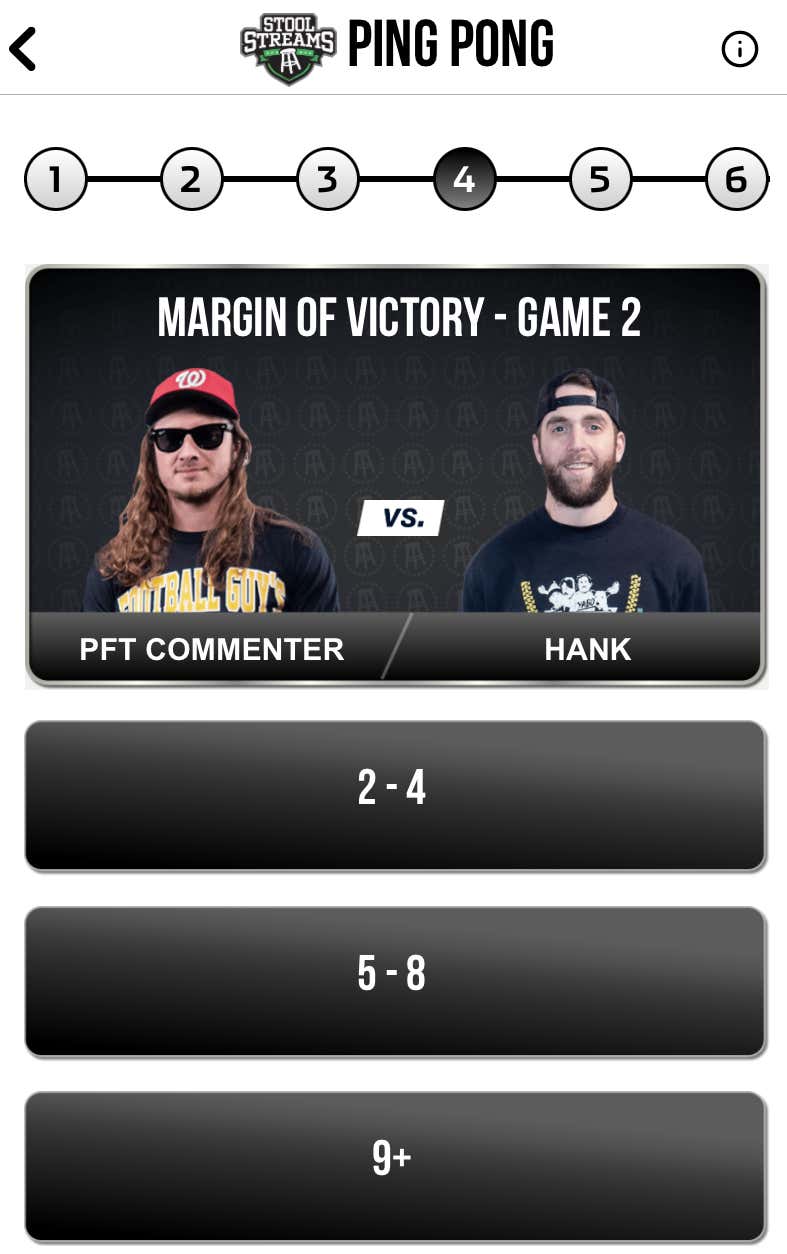 Storylines: There really isn't much history between Hank and I. Nothing to see here, nothing at all. All jokes aside, there is no doubt that he wants revenge after the statement I made two weeks ago. I'm expecting him to come out firing and I have to be ready for any and all strategies. He is a very tough opponent to play and I am looking forward to the challenge. There is no doubt that he has closed the gap in terms of skill level, and it is never easy against him. It's going to be a must-see match to close out our broadcast.

Quotes to Remember: "Hank is a very, very good table tennis player. I am going to need to be locked in and play smart in order to secure the win against him." - Jake

"Beat Jake Marsh." - Hank, describing the one thing on his mind entering the match 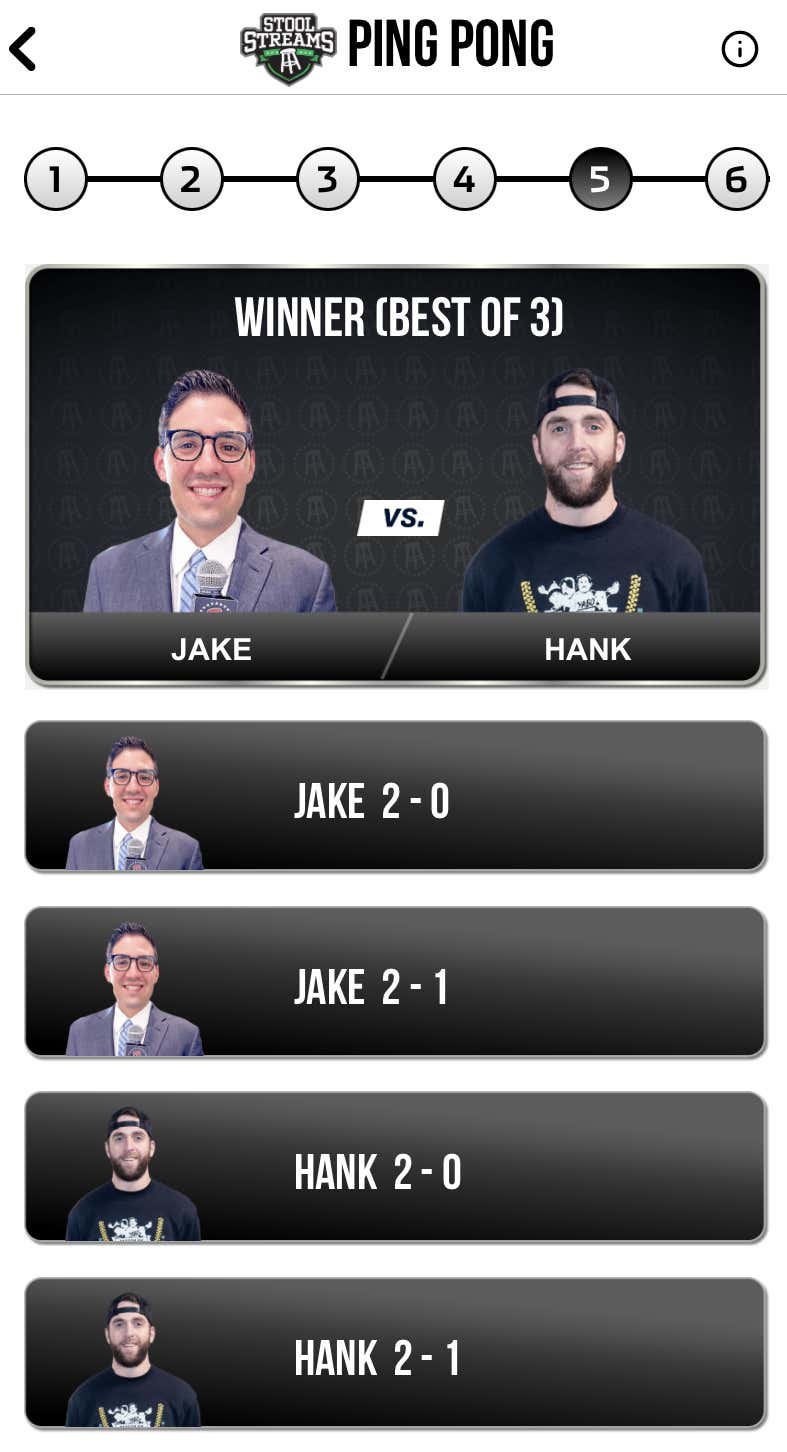 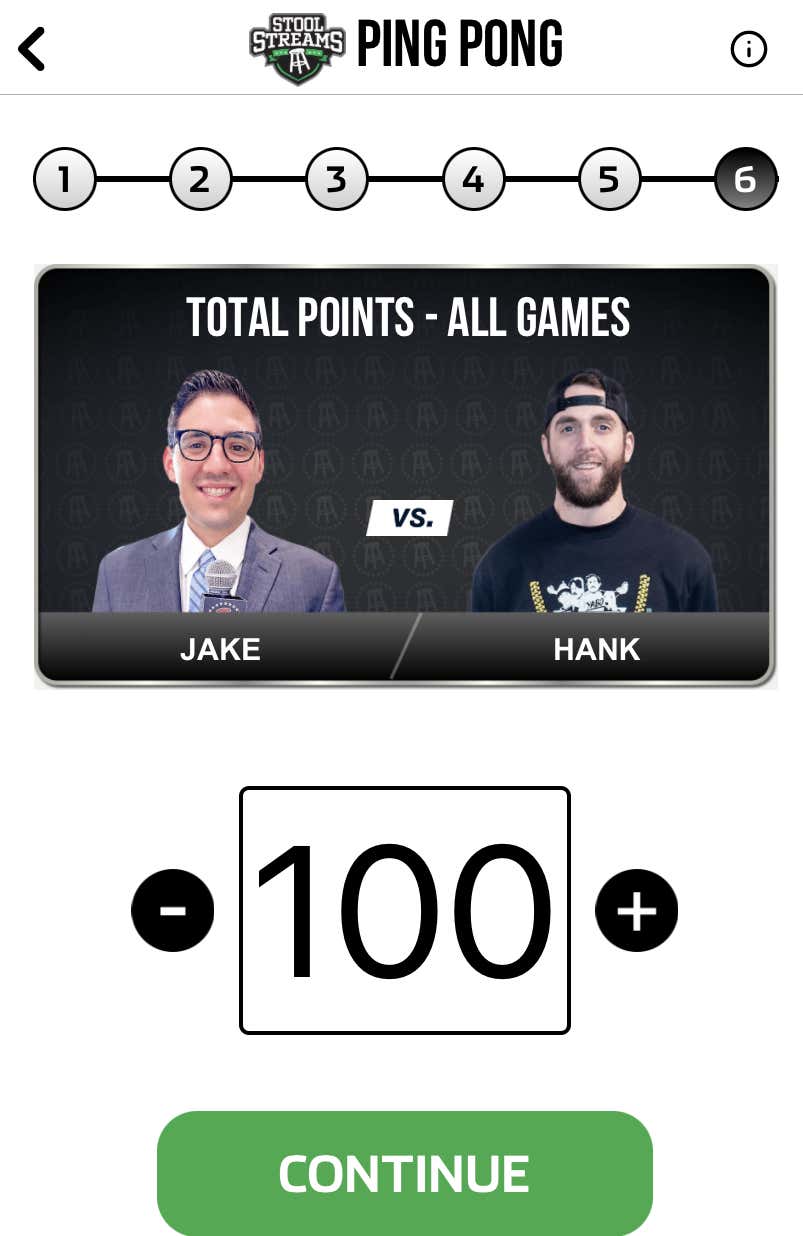