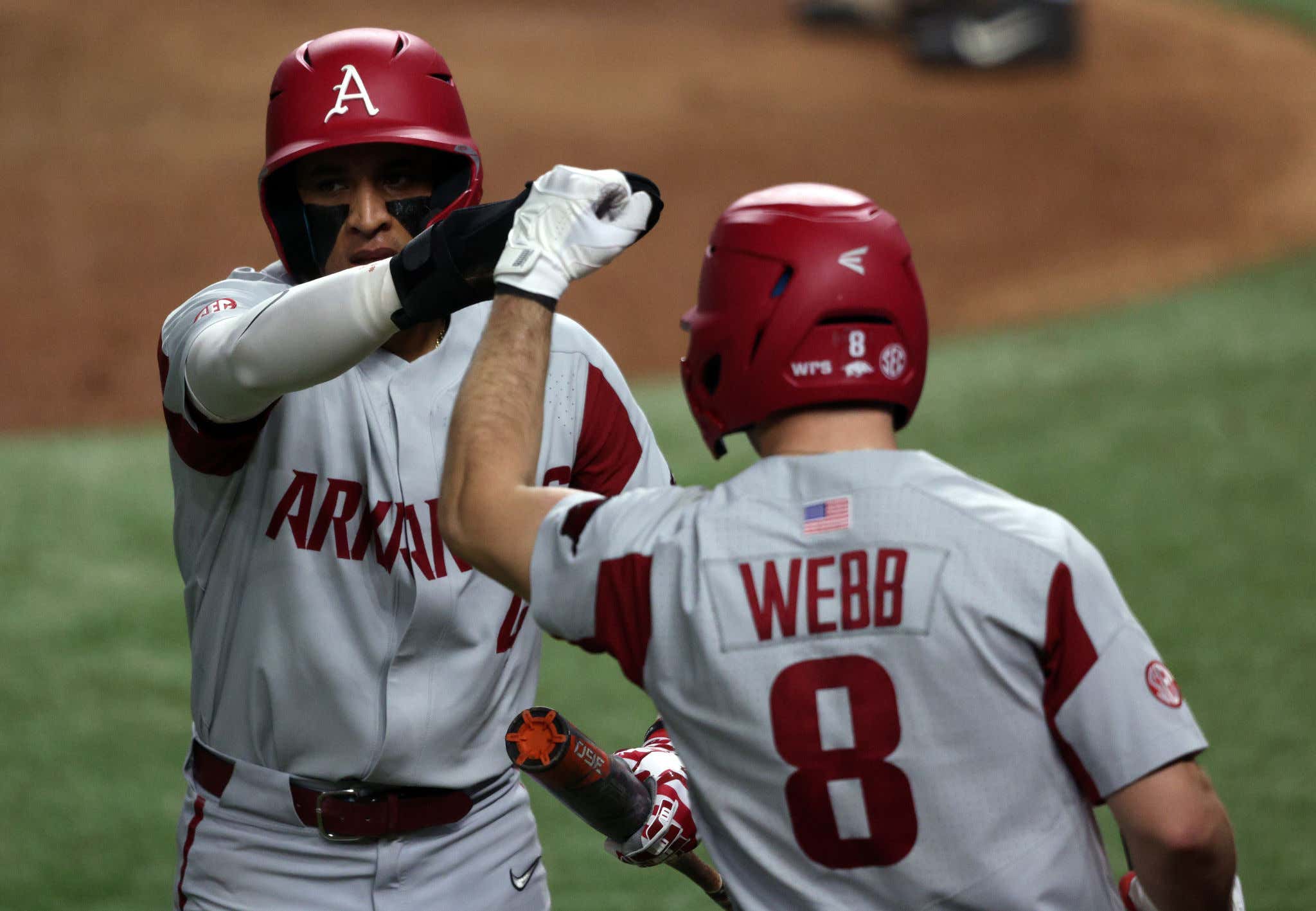 It was another fantastic week of college baseball as we keep moving towards Selection Monday and the College World Series. There was shakeup in the Top 10, a series between Nos. 1 and 4 that lived up to the hype and then some and we know the 20 potential host sites for regionals.

Here are the top stories from the week:

Arkansas Handles Tennessee in Its Biggest Test of the Season

No. 1 Arkansas traveled to No. 4 Tennessee this weekend to face its biggest test of 2021 in the Vols. The Razorbacks came away from the series winning two of the three games, all of which were decided by one run. The Hogs overcame a 5-0 first inning deficit on Friday to win 6-5 and took Sunday's rubber game 3-2. Sandwiched in between those, however, was an awesome Tennessee walk-off home run by Max Ferguson.

The series really came down to Arkansas reliever Kevin Kopps, whose ERA rose to 0.80 on the season after he gave up one run in the 6.2 innings he pitched in the series. All three games were well-played contests with great finishes. I would not be surprised at all to see these teams meet again on Sunday in Hoover and one more time in Omaha.

Also, Tennessee head coaches Tony Vitello and Dave Van Horn got into a pretty heated exchange after Sunday's game. Vitello was Van Horn's top assistant for four seasons at Arkansas before he took the Tennessee job.

After it looked pretty clear-cut that Mississippi State was in the conversation at the top of the country with Arkansas, Vandy and Tennessee and Ole Miss was slipping a bit, those two switched places this weekend. Ole Miss took the series from Vanderbilt and Mississippi State lost two of three at home to last-place Missouri.

I don't think it's anything to worry about long-term for MSU, but this weekend was an impressive statement for the Rebels. That's an offense you don't want to see when it's clicking.

In a new move for this season, the NCAA announced last week 20 sites from which it will choose the 16 schools which will host this year's regionals and super regionals. And in what will certainly be different than any other season, eight of these sites will host the super regionals regardless of who's playing. So Georgia Tech and Florida State could play a super at Arkansas. Things might get weird.

But I loved seeing schools like Southern Miss, East Carolina and Gonzaga on the list of 20. Hopefully the 16 most deserving teams earn the right to host, regardless of their stadium capacity or anything like that.

I mentioned Kopps and his two outstanding performances earlier. This guy is just unhittable. Tennessee somehow managed one run off him in 6.2 IP and it would be reasonable to consider that quite lucky.

His numbers on the season are just insane. Kopps has allowed just 5 ER all season and has struck out 89 in 56.1 IP. The Hogs are in great shape heading into the NCAA Tournament with potentially college baseball's best arm coming out of the bullpen.

Arkansas is sweeping this week's awards after such an impressive performance on the road. But perhaps no play was bigger in the entire series than this catch on Friday night by Christian Franklin.

Franklin's full-layout grab saved a run which would have been the Vols' sixth — not to mention putting another runner in scoring position with just one out — which ended up being the Hogs' total to win the first game by a run.

Uniform of the Week: Oklahoma State

This is just a great college baseball uni. The "State" in the bat. The "OS" logo on the two-colored panel hat. The pant stripes are a great touch, too.

One of the classic college baseball antics which will never get old. When there's a rain delay, these guys aren't going into big league clubhouses to play ping pong and video games or lounge around in $2,500 recliners. So you may as well stay out there and get into a good, old-fashioned dance battle.